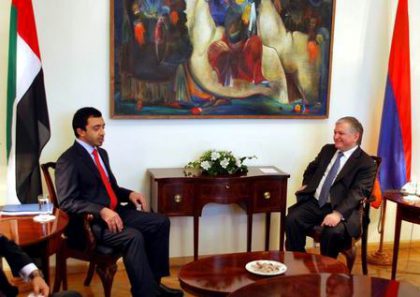 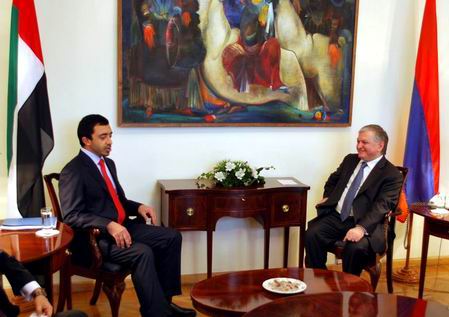 The tour was in line with a similar series of visits to several Asian and African countries earlier this year, during which Sheikh Abdullah discussed cooperation and friendship ties with the officials in those countries in all fields.

Minister Nalbandian expressed satisfaction on the dynamically developing cooperation between Armenia and the United Arab Emirates, mutual high-level visits, and growing interest of the Emirate?s businessmen in Armenian economy. Edward Nalbandian stressed that thee Emirates are important economic partner of Armenia in the Middle East region. He said that the two countries exchanged many visits, but relations between them, especially economic, are developing slowly.

The UAE Foreign Minister Abdullah Bin Zayed Al Nahyan thanked for warm reception and stressed that his country intends to take concrete steps for the further expansion of cooperation with friendly Armenia. “Our companies can intensively cooperate in implementing joint programs”, he said

In the course of the meeting the two discussed wide range of issue concerning the development of bilateral relations, cooperation within the frameworks of international organizations. They stressed that high level of political dialogue and serious potential for expansion of economic and cultural cooperation exists between the two countries.

Armenian Foreign Minister said that Armenia geopolitically being close to the Middle East is interested in the establishment of peace and security in that region.

Ministers Nalbandian and Al Nahyan exchanged views on the issues concerning strengthening of security in the South Caucasus and the Middle East.

The meeting was followed by the signing ceremony of documents. The Ministers signed Agreement between Armenia and UAE on land donation for the establishment of diplomatic missions, as well as Memorandum of Understanding for exempting persons having diplomatic passports from visa requirements.

The signing ceremony was followed by the joint press conference of Ministers during which questions were asked also about the Turkish-Armenians relations. Sheikh Abdullah also called courageous the steps taken in the “football diplomacy” between Armenia and Turkey, although it was clear that Turkey was recently setting back from its initial commitments.

On 09 July 2009, two weeks after his Armenian visit, Sheikh Abdullah visited Baku and met with the President of Azerbaijan Ilham Aliev and Minister of Foreign Affairs Elmar Mammadyarov. They discussed bilateral relations and ways to boost them in various fields, particularly in the fields of petrochemical industry and tourism. Their discussions touched on the conflict on Nagorno-Karabakh between Armenia and Azerbaijan.

Sheikh Abdullah said the United Arab Emirates was deeply interested in boosting bilateral ties with Azerbaijan in various areas and that his country will soon open its diplomatic mission in Azerbaijan to further boost the bilateral relations.

The Press Conference (complete audio, 12 minutes, in Armenian and English, provided by the Ministry of Foreign Affairs in Armenia)