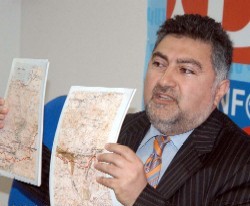 The 3rd edition of Ara Papian's “Legal Bases for Armenians Claims” has been published recently in Yerevan.

This edition is based on previous editions (Yerevan 2007, Toronto 2008), but includes additional articles covering the period until July 2009.

More than two third of the 187 page-book is in Armenian language with several articles in Russian and English (see below list of English articles).

Ara Papian has been studying documents related to the famous “Wilsonian borders” between Armenia and Turkey which was signed by the 28th American president Woodrow Wilson.

Papian considers that these documents are the only ones with legal force regarding the borders between the two countries and can serve as a base to claim our rights at the UN's International Court to territories like Van, Erzurum, Bitlis and Trapizon, which were indicated in Wilson's map within the Armenian borders. He insists that present-day Armenia should study well the “Wilsonian borders” as a legal document.

Born in Yerevan, Armenia in 1961, Ara Papian is a gradute of the Department of Oriental Studies of Yerevan State University (1984). In 1994, he graduated from the Moscow Diplomatic Academy and in 1998, from NATO Defense College in Rome.

He has worked in several departments in the Ministry of Foreign Affairs in Armenia and posted to the Armenian Embassy in Tehran, Iran (1992 – 1993) as second secretary. He has also served in the Armenian Embassy in Bucharest, Romania as second secretary and later as Charge d'Affaires (1995 – 1997). His latest diplomatic post was Ambassador of Armenia to Canada (2000 – 2006).

Before joining the diplomatic life he worked as Professor of the Armenian language and literature at Melkonian Educational Institute in Nicosia, Cyprus.

Papian is the Head of “Modus Vivendi” Center for Social Science, a Non-Governmental Organization found in 1999 with the mission of “solving the regional problems by peaceful means through International Law“.

The English articles in the book “Legal Bases for Armenians Claims” are the followings:

The Arbitral Award on Turkish-Armenian Boundary by Woodrow Wilson, the President of the United States of America (pages 150 – 168).

The Legal Interrelation between the Treaty of Sevres and the Treaty Lausanne (pages 169 – 175).

Unlawfully Confiscated American Property in Turkey: Problems and Perspectives for the Indemnification and Compensation (176 – 181).

Ara Papian's book could be downloaded also from our Electronic Library here.