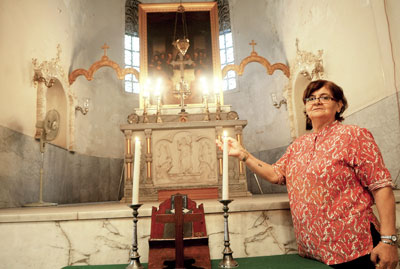 Zabel Joshi, the last Armenian in the city, talks to Meher Marfatia of roots and wings

How will I know you? she asks on the phone. We plan to meet outside the Armenian Church on crowded Medows Street, off Flora Fountain. Then she answers herself: “Ah, you're Parsi, I'll be able to tell. We come from the same part of the world.”

The similarity ends with that broad geographic connect. Having spent 40 of her 60 years in Mumbai, Zabel Joshi of Juhu is in the unique position of being the city's sole Armenian.

One among 15 Armenians when she came in 1972, she joined the exclusive group of survivors from this Central Asian race, hanging on to a few vestiges of their ethnicity. Hundreds arrived here over three centuries ago.

Today it's just this smiling woman who leads the way proudly into her church, the only of its kind in town. “Followers of the Armenian Orthodox Church, we were first to believe in Christ,” she explains.

Growing up Zabel Haykian in Beirut meant belonging to a happily conservative family. As children, she and her four siblings sat at their mandolin-strumming mother's feet, mouthing folk songs of freedom and peace (the Armenian genocide is possibly one of the most mapped after the Holocaust) in languages like Arabic, French, Turkish, Greek, Persian and Urdu.

All these stirred well into the fresh melting pot of tongues, including Hindi, Marathi and Gujarati, which she dived into with fluent readiness on reaching Bombay. That was as the bride of businessman Kishore Joshi whom she met while working as a receptionist at the Carlton Hotel in Beirut. “The Armenian alphabet has 36 letters, not 26. There is no sound we can't learn,” she claims.

The ambient hush we sit in resonates with guttural double consonant sounds of her reciting them. Zabel is quick to credit the smooth adjustment to commonalities between her native and new culture. “Both Armenia and India have ancient civilisations, wise and warm people, great food and festivals.

Assimilating was easy,” she says. And adds that firm personal favourites are bajra no rotlo and the chandrakala specialty a mithai shop in Khar serves at Holi, which she looks forward to later this week.

An extended family of in-laws from Rajkot have been introduced to different traditions too – the Armenian New Year's Day celebration on January 6 called Tznunt, kata Easter eggs baked with nutmeg and cinnamon… “But nothing can beat our baklava,” she declares.

As she bustles around lighting candles and bowing at an altar adorned with Ottoman-style relics, the homemaker speaks of keeping in touch with His Holiness Karekin II, world head of the Armenians. She shares how all her three daughters – the youngest being actress Tulip Joshi of Mere Yaar Ki Shaadi and Matrubhoomi fame – have been baptised here.

Lone tangible sign of earlier Armenian presence, this shrine opened its doors to Syrian Christians for Sunday prayer service once rows of its own parishioners gracing the pews thinned. Down the decades, Armenians from Mumbai have flock-migrated to the US and Canada. “I tell my girls, when I'm buried in the Armenian cemetery at Antop Hill, the epitaph should be: The last of us!” Zabel quips.

Settling in 17th-century Calcutta, a city they still inhabit in larger groups, Armenians built schools, colleges and hospitals. Their educational and social activities lent a clear luminosity to an India they found welcoming.

By the mid-18th century they prospered in Bombay as merchants, jewellers, carpet makers and tailors. Their residential hub lay around Armenian Lane, abutting their church erected in 1796 with trader Jacob Petrus from Hamadan as benefactor.

From the community's roster of accomplished doctors, lawyers, musicians and writers, Zabel admires her namesake, Armenian poet Zabel Asadour. “Her deeply felt verse is a constant call to never forget our homeland and yet adapt,” she says. “I live with the wonderful people of Mumbai by the tenets we get as a baptism blessing: havatk, hoous, ser – faith, hope, love.” The very three words I see inscribed on rectangular links of a silver bracelet on the wrist of our last Armenian.