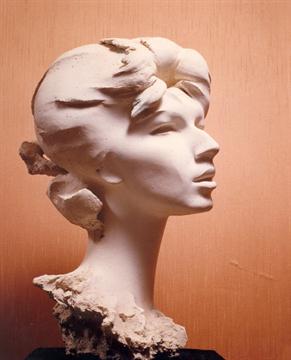 By India Stoughton
?
BEIRUT: Sculpture in Lebanon is something of a rarity nowadays. For every 10 exhibitions that open in Beirut, perhaps one features sculpture or installation ? and even then traditional stone or cast metal work is in scarce supply.
?
This month the Esquisse Gallery is curating an exhibition by one of the giants in this seemingly diminishing field, Armenian sculptor Mkrtich Mazmanian. “Les Dames de Beyrouth,” on show at Le Grey Hotel in Downtown, is comprised of semi-abstract bronze sculptures of the female form.
?
The 60-something artist is best known as a sculptor of public memorials and portraits. For this exhibition, he has provided 15 elegant bronzes as well as five clay portraits. He terms the style of his bronze work “figurative abstraction,” which in practice ranges from slightly figurative to almost completely abstract ? alluding to the female form via a subtle line or curve.
?
“Divine Pearl” is one of Mazmanian's more realistic pieces. This stylized female figure has slender legs and jutting hips, head thrown back in abandon, her arms raised, a curtain of hair falling down her back. In style it is reminiscent of a Henry Moore ? a nicely balanced mixture of organic curves, offset by the harder lines and corners provided by hips, knees and elbows.
?
“Equilibrium Two” retains this contrast between smooth curves and angular lines, but is a far more abstract rendering of the human form. There are no delineated legs, the sculpture instead tapering to a single fine point at the base, giving the woman a mermaid-like appearance.
?
Above this delicate base, the jut of a hip and a faint bulge where two legs might meet provide just enough visual information to suggest a woman. The top half of the sculpture rises in a graceful sweep, narrowing to a slender waist before widening out at the top, conveying an impression of shoulders tilted to one side. The simple, upright form may not include


legs, arms or head, but is clearly human.
?
Mazmanian's bronzes are mostly matt, rather than polished, each one colored by the artist to create dappled shades of rust, green and brown.
?
“For me bronze is a very talkative, communicative way of expressing [myself], because you can really work with the colors,” he says, his daughter (Esquisse co-founder Zara Mazmanian), translating from Armenian. “I do the oxidation to give the exact color that I want. It?s a technique that not everybody knows.”
?
Mazmanian's portraits provide a more realist approach to sculpture, and were included to demonstrate his grasp of both styles.
?
“The time of realism has passed,” the artist says, explaining his love of figurative abstract sculpture. “I learned the [technique] to do realist sculpture, [but] it's like the base of it ? I have to create my own style.”
?
Figurative abstract sculpture is, he contends, much more difficult than simple realism.
?
“In realism you have the academics … but here you have to have harmony, you have to have balance. You have to make them attractive but at the same time people have to understand what it is,” he says.
?
“Why should I copy the human? When you have the real human who loves, who speaks ? why should I do the same in a material?”
?
The artist studied sculpture in Armenia before moving to Lebanon 20 years ago. He grew up in a house full of women, he says, and later helped to raise three daughters.
?
“For me, the woman or the mother does everything,” he says. “They are more productive than men. If the woman disappears from the world there won't be any progress.”
?
“I present woman not only as a human being,” he continues, but as “the connection between the real life and the infinite. All my sculptures come on a single axis and then they go up and up and up … The connection between us, the human, and the outer space ? I wanted to show this through women.”
?
Elegant though Mazmanian's fine art sculptures are, he admits he likes working on a larger scale.
?
“I prefer monumental sculptures,” he says, “I like to have a balance between monumental sculptures and architecture … In education you study the history of art from the Greeks, the Egyptians, and you always dream of doing big sculpture like the pharaohs, the pyramids ? anything related to buildings and architecture.”
?
Mazmanian's women do not represent a startlingly new approach to sculpture or the female form. That said they are elegantly conceived and beautifully executed, and provide a return to traditional subjects and techniques rarely showcased on Beirut's resolutely forward-looking art scene. For fans of sculpture, traditional or contemporary, Mazmanian's work is well worth a look.
?
Mkrtich Mazmanian's “Les Dames de Beyrouth” is on show at Le Grey Hotel in Downtown Beirut until June 17.