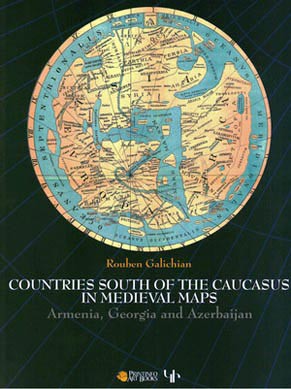 A book by Rouben Galichian

Countries South of the Caucasus in Medieval Maps ? Armenia, Georgia and Azerbaijan by Rouben Galichian.

According to the author, the intent of this work is to familiarize the reader with medieval cartography on Armenia, Georgia and Arran (Caucasian Albania, or present Republic of Azerbaijan), situated south of the Caucasus range. It is arranged in four chapters: Introduction to Early Medieval Maps, Early [European] Medieval Maps, Islamic Maps, and Late Medieval Maps. List of Maps appears at the beginning of the book, Conclusion, Bibliography and Index of Toponyms and People at the end. The author has investigated collections of medieval maps in several European major libraries and those of Yerevan, Istanbul, Teheran etc., trying to give the reader a broad historical background on medieval maps, both European and Islamic.

The author depicts and describes 82 main maps (mappa mundi. European and Islamic), with 26 details, mainly showing Armenia and the neighbouring territories in three well-balanced chapters (two to four). Chapter two includes 32 European medieval maps (Nos1-32) and nine details, beginning with a simple T-O map by Caius Crispus Sallustius, known as Sallust (86-34 BCE), a Roman senator and historian. This pictured manuscript copy dates from the 9'h or 10'h century, drawn on vellum and kept at the University of Leipzig.

The third chapter focuses on 23 Islamic world maps (Nos 33-55) and two details, produced originally by Ibn-Hawqal, Istakhri, Muqaddasi, Idrisi, Qazwini, Ibn-Said, Mustawfi and others. The newly discovered Arabic manuscript in Egypt Book of the Wonders of Sciences and Visual Delights, acquired by the Bodleian Library, Oxford, is also described in some length. (pp.108-113, plates 45, 45a and 46).

Chapter four contains images and descriptions of 27 later [European] medieval maps (Nos 56-82) and 15 details. In my view, this chapter includes the most important achievement of the author, namely depicting and describing a medieval Armenian map (plate 67) and several tables, diagrams and texts on celestial bodies, little known in Western cartographic circles.

The author has succeeded in unearthing these valuable cartographic documents during a search in the Armenian manuscript depository, the Matenadaran, Yerevan. Plate 67 is the only T-O type map in the Armenian language by an anonymous cartographer. Various scholars have dated it as early as 1206 to as late as 1360.

The author concludes that in medieval times, due to lack of border demarcations and the rule of force, few borders were fixed for long, or could be even approximately determined. Consequently, most medieval maps lack bordering lines between countries which are shown just by mentioning their names somewhere in the area they occupied. Therefore, the countries south of the Caucasus, although being almost at the edge of the known world, do appear on many important medieval maps in one form or another. Armenia appears in almost every map showing some sort of detail, and in many cases both Greater and Lesser-Armenia (Armenia Major and Minor) are depicted.

Colchis and Iberia, the constituent parts of Georgia, as well as [Caucasian] Albania, the predecessor of the Republic of Azerbaijan, appear in many maps, but they do so less frequently. Perhaps a more prominent position given to Armenia is due to the fact that it was the oldest and easternmost Christian nation, which proclaimed Christianity as the state religion in 301 AD, and due to the Biblical account of the Flood and Mount Ararat, where Noah?s Ark came to rest.

In Islamic cartography, the regions and countries south of the Caucasus are presented somewhat differently. Maps of the Balchi-School usually show Armenia, [Caucasian] Albania, and the Persian province of Azerbaijan in their regional sheets. The only Syrian map by Bar Hebraeus, produced during the early thirteenth century, includes many toponyms related to Greater as well as Lesser Armenia, while from their neighbouring countries the Persian province Azerbaijan is shown in the south and lands of the Alans and Bulgars mentioned in the north. It is noteworthy that in medieval times the area of today's Republic of Azerbaijan was called [Caucasian] Albania, a Christian country which disappeared during the 9th or 10th century, and its land was later divided into various provinces, such as Daghestan. Derbend (Derbent), Shirwan, Shamachi, etc. The term ?Azerbaijan? which over two millennia was solely the name of the north-western province of Persia, was also given to [Caucasian] Albania around 1918, creating the Republic of Azerbaijan.

Rouben Galichian, the author, was born in Tabriz, Iran, to a fancily of immigrant Armenians. After attending school in Teheran he received a scholarship to study in the UK, and graduated in engineering sciences. His interest in cartography started early in life, but in earnest during the 1970s. His first book Historic Maps of Armenia: the Cartographic Heritage, 2004 became a success (reviewed in IMCoS Journal, No. 97, p. 65). He received an Honorary Doctorate for his cultural services to Armenia in November 2008 from the Armenian authorities.

Anyone interested in the history of medieval maps generally, and maps of Armenia in particular, will surely benefit from this excellent work.