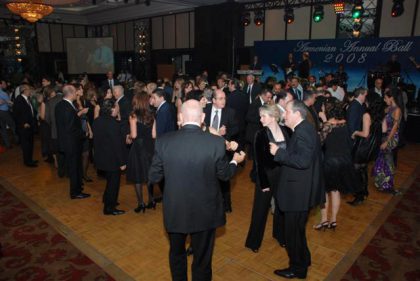 Specially invited for this occasion was singer Koko Asaian from Aleppo (Syria) accompanied by Sbidag band.

In a bid to attract more people (having in mind the current worldwide economic crisis), the entrance fee this year was AED 300 (US$ 82) per person (compared to AED 375 in 2008). Beverage rates were also reduced. All at the expense of the food quality. No Armenian dishes were served (although the distributed commemorative book included more than 30 culinary delights, mostly for demonstration purposes). The number of attendants this year was 380 (30% less than last year).

The low priced raffle draws were eliminated this year. Valuable prizes were given against AED 500 (US$ 136) raffles, however almost all the winners returned back their prizes to the organizing committee (in the form of donation), a practice attributed to the peer pressure.

The acoustic and performance part was better this year. As a surprise, several Armenian jazz musicians who were in Dubai on the occasion of the Dubai International Jazz Festival, appeared on the stage and performed several ethnic jazz pieces, to the delight of the audience.

The Master of Ceremony was the same person. We need to discover new talents in this domain.

The distributed commemorative book was 90% identical in content with the last year's publication, except for the new photos and the list of community activities. This solid looking A4 size expensive publication, would have been a good way to disseminate valuable information, if the content had been new and enriched with valuable articles and chapters. Imagine the immense size of all the previous annual ball publications on your library shelf and the little accumulated value they represent.

The preface article in the book traces back the presence of the Armenians in the region to the “early days of 16th century”, before even some of the local tribes! As far as we know, this article is used without any change for the last 5 or more years. The youth club and other committees mentioned there have long ceased to operate.

It will be interesting if you post your comments below (According to previous statistics, we will be lucky to get one or two comments, usually with fake names). This is the only way to know more about this important social event and to work on ways to improve it. Or, maybe you really do not believe there is room for improvement.

According to a previous announcement “The ball is a unique event whose revenues secure the proper running of the community?s activities”. A good wisher once advised us to be careful in what we publish in Azad-Hye, if we want to get a share of the revenue.?

'Mondanite' Magazine writes about the Armenian Ball in Dubai 2005

Comments on the Annual Armenian Ball in Abu Dhabi 2004

Scene from the 2008 Dubai event (other photos are available here): 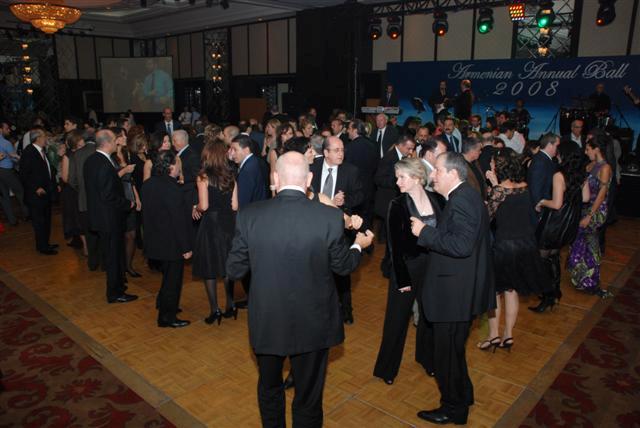