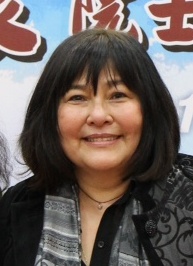 Seroun Wang is the great granddaughter of Parounag Gurdjian from Bolis (Constantinople / Istanbul). In 1965 she visited with her mother Seroon Anna the Armenian Prelacy in Cairo, where they met with Priest Mampre Sirounian. They visited also the Armenian cemetery where relatives were buried (see the videoclip below exlusively for Azad-Hye readers).

She fondly remembers the few days she spent in Cairo and the great impression the priest left on her. Recently she sent the following narrative about the story of her family:

I am the great granddaughter of Parounag Guirdjian. Back in 1967 while in college here in Washington, DC, I had the pleasure of making the aquaintance of Abraham Bodurian (Bodurgil). He was a bookbinder from the Pera section of Bolis. On the inside cover of some of his books I noticed the seal of my great grandfather stated as “Guirdjian et Fils, Atelier” (Guirdjian and Son, Workshop).

How did my grandmother's family end up in Cairo from Bolis is an interesting story and I would like to investigate the reasons so that a story may be written. I realized from my great grandfather Parounag Guirdjian's comments and decision to secretly leave Bolis that the genocide did not begin in 1915, but much earlier.

One day he was called to the Sultan's palace in the late 1890s and was given a bag of gold and the official seal to post it above the door of his establishment. He came home to his house in Pera, where his children, my grandmother Nouritza (Nourik) and her little brother Levon were playing with a lamb in the yard. They left the lamb and started playing with the gold pieces on the table. My great grandfather was told by friends that if he would be invited to the palace for the second time he might never come home. His wife had died earlier in a kitchen accident tripping over a servant sleeping on the floor. It's a strange accident and I don't have the full story.

Soon Guirdjian took his children to the Bosphorous and from there he took a boat to Varna, Bulgaria, where there was an aunt and an uncle. The children were put in a French Catholic school after the family left all its belongings behind.

Guirdjian left the children in Varna and went to Boston, USA, to check if it was a nice place to raise the children. He was making acquaintences and was well liked for his foreign accent and his ability to speak French.


One day a Turkish man came to his place in Boston and said the Sultan wanted to know why he left Bolis and wanted him to come home. He presented him with a second bag of gold to pay his way back home. So he said to himself… if they can find me here, they can find me anywhere, but not in Cairo.

So he went back to Bulgaria and picked up Nouritza and Levon and brought them to Cairo, where he remarried a woman that the children did not like.

I am currently trying to find out why he was afraid of staying in Bolis. There are still Armenians living in Bolis, but I just don't know why our family couldn't remain there. What was the Sultan's problem with this bookbinder?

I showed one of his books to my Armenian School teacher when I was 10 years old and he started crying. These books bring people to tears. They are such beautiful representation of Armenian culture. I hope someday to donate them to the Library of Congress where they will be safe, but right now they are all packed away in my attic.

Thank you for listening to my story…

Videoclip of Seroun Wang's visit to Cairo in 1965: