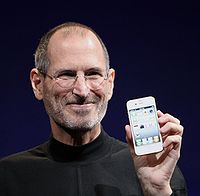 Steve Jobs was raised by Clara Hagopian, an Armenian lady who adopted him when he was one week old. He grew up knowing Armenian culture and language.

Below are excerpts from Wikipedia's page on Steve Jobs:

Jobs' history in business has contributed much to the symbolic image of the idiosyncratic, individualistic Silicon Valley entrepreneur, emphasizing the importance of design and understanding the crucial role aesthetics play in public appeal. His work driving forward the development of products that are both functional and elegant has earned him a devoted following.

On August 24, 2011, Jobs announced his resignation from his role as Apple's CEO. In his letter of resignation, Jobs strongly recommended that the Apple executive succession plan be followed and Tim Cook be named as his successor.

America values sport because the records set by athletes are standards of excellence that cannot be duplicated in most other pursuits.  Babe Ruth's home run record.  Roger Bannister's four minute mile and other records inspire us.  As do the examples of human spirit reflected in the careers of Johnny Unitas, Roger Maris, and Joe Namath that are what political philosophers call “experiences of transcendence.”  We see a glimpse of “end time” and for a moment transcend this life and live in the realm where things eternal preside.

Then someone like Steve Jobs comes along and sets a standard of excellence in Business that is unparalleled.

If you ever started a business, struggled to make it succeed, or just to make payroll, you know how much Steve Jobs has accomplished.

Like many entrepreneurs, his company came to the point that they thought they needed a “manager,” not an entrepreneur at the helm of Apple.  He was kicked upstairs; a marketing “genius” from Pepsi was brought in?and nearly killed the company.

Back came Steve Jobs who turned the company around and grew Apple into the highest capitalized company in America.

If you live long enough you come to realize that there are no straight lines in human life.  We set out to accomplish one thing and make frequent course corrections.  Steve Jobs, Bill Gates, Michael Dell and others like them experienced immediate success and built important corporations that employ hundreds of thousands of employees.

Most do not.  It takes years of hard work and sacrifice that may require a series of startups before one clicks.

When you're on that road and look at how difficult the U.S. government makes it for those who create jobs for others, you come to admire men like Steve Jobs. Jobs was adopted by Armenian parents, so maybe that had something to do with his entrepreneurial success.

In 1915 when an Islamic mullah in Turkey issued a fatwa calling for the killing of Armenian Christians, Armenians living in Turkey ran for their lives or were killed. Many got away and came to America where they were hit by the Great Depression and then World War II.

On my office wall at Yorktown University is a registry from Ellis Island where my Armenian grandfather arrived a few weeks after the sinking of the Titanic.  Even the prospect of death at sea didn't deter him from getting out of Turkey?before the genocide.  My grandmother was less fortunate and fled to Egypt where her family was broken up, her fourteen year old sister married to an Egyptian, and she made her way to America.

Few Armenian immigrants spoke English, even fewer were college educated, so they were forced to survive by their wits. Since few employment opportunities were available to them, they started businesses.  The lucky ones were sponsored by Protestant religious denominations that were active in Turkey at that time.  Any way they could, this generation of refugees made their way to a new and strange country, learned English, found a way to make a living and started families. Their children were old enough to serve in World War II and after the war these first generation Americans made their way in life.

One such family adopted Steve Jobs. Steve Jobs is responsible for the good fortune of tens of thousands of Americans who work for Apple.  And now, the end of Steve Jobs' journey has come, not because Steve wants to retire or because he?s bored. There are no straight lines in life and if there were, Steve Jobs would be around for future decades of opportunities to make decisions that would make Apple even greater than it is today.

Thank you, Steve.  You have earned our respect, admiration and gratitude.