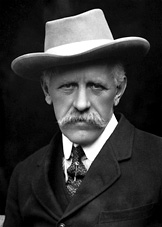 Fridtjof Nansen (October 10, 1861-May 13, 1930) was born at Store Fr?en, near Oslo. His father, a prosperous lawyer, was a religious man with a clear conception of personal duty and moral principle; his mother was a strongminded, athletic woman who introduced her children to outdoor life and encouraged them to develop physical skills.

In school Nansen excelled in the sciences and in drawing and, upon entering the University of Oslo in 1881, decided to major in zoology. In the next fifteen years he united his athletic ability, his scientific interests, his yearning for adventure, and even his talent for drawing in a series of brilliant achievements that brought him international fame.

In June, 1921, the Council of the League, spurred by the International Red Cross and other organizations, instituted its High Commission for Refugees and asked Nansen to administer it. For the stateless refugees under his care Nansen invented the ?Nansen Passport?, a document of identification which was eventually recognized by fifty-two governments. In the nine-year life of this Office, Nansen ministered to hundreds of thousands of refugees – Russian,Turkish, Armenian, Assyrian, Assyro-Chaldean – utilizing the methods that were to become classic: custodial care, repatriation, rehabilitation, resettlement, emigration, integration.

Nansen's last great humanitarian effort, at the invitation of the League in 1925, was to save the remnants of the Armenian people from extinction. He drew up a political, industrial, and financial plan for creating a national home for the Armenians in Erivan. The League failed to implement the plan, but the Nansen International Office for Refugees later settled some 10,000 in Erivan and 40,000 in Syria and Lebanon.