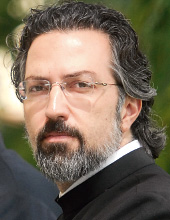 Born in 1969, Ktrij Devejian is the Foreign Press Secretary of the Catholicosate of All Armenians and the Mother See of Holy Etchmiadzin. He is a married priest of the Armenian Church.

Born in the United States, in Philadelphia, Pennsylvania, he was given the baptismal name Armen. His family moved to Fresno, California and he attended California State University, Fresno, majoring in Industrial Technology and minoring in Armenian Studies.

In 1996, Devejian became a licensed architect in the State of California at the age of 26. From 1997-2000, he was Project Manager for the construction of the new Exhibition Hall for the City of Fresno. In 1999, he was the youngest delegate sent to the National Ecclesiastical Assembly in Holy Etchmiadzin which elected His Holiness Karekin II as Catholicos of All Armenians. In 2001, Devejian moved to Armenia at the invitation of His Holiness Karekin II, where he established the Foreign Press Office for the Mother See of the Armenian Church.

Devejian was ordained a married priest in Holy Etchmiadzin in 2004, and was appointed by His Holiness as Pontifical Representative for India in 2005. Devejian has accompanied His Holiness on a number of Pontifical Visitations to North America, India and Europe.

Devejian is a proponent of repatriation, and encourages young Armenians from throughout the world to invest their personal time, contributions, talents and financial resources in the rebuilding of Armenia following independence from the Soviet Union in 1991. Devejian has spoken on the importance of the Armenian Church and the Armenian family and the vital role they jointly play in Armenian society, as well as the current state of homeland/diaspora relations.

Immediately following the 2008 Presidential Elections in the Republic of Armenia, Devejian wrote an article - aimed chiefly at the Armenian diasporan community - calling for tolerance, patience and discretion. The article caused a considerable amount of controversy within the Armenian-American community.

In the late 1980's and early 1990's, Devejian also served in the administrations of California Governors George Deukmejian and Pete Wilson in the Office of Criminal Justice Planning, advising on juvenile justice and delinquency prevention.

Read in Azad-Hye: The cornerstones of free societies