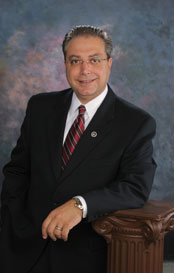 For more than 25 years, Gary H. Bedian has been developing unique and effective Strategic Business Alliances that have consistently produced significant capital gains and increased market share for his employers, clients and associates.

In founding his international consulting and development company, BEDIAN INTERNATIONAL, and its subsidiary and affiliate concerns, Bedian built upon a strong foundation of corporate and economic discipline that he established while managing large accounts and holdings for Integrated Resources Inc., Fred Sands Realtors, and Paramount Group Inc. in North America.

His domestic expertise has translated into phenomenal successes for his clients with major business interests in foreign markets such as Europe, the Middle East, the Far East, and the developing economies of former Soviet states. Beyond being successful in financial ventures, Bedian's activities, corporations, and holdings have informed, enlightened and inspired a wide range of individual and institutional concerns.

Bedian also carries with him a strong tradition of community involvement and pro bono work. His concern for his fellow citizens and cultural heritage is evidenced by a long list of honors, accolades, and organizational affiliations, among them a 1992 appointment to the position of Deputy Minister of Industry and Trade and Chief Advisor for the fledgling Republic of Armenia. Bedian is also the co-founder of the Armenian American Chamber of Commerce, the first ever Chamber of Commerce for a former Soviet Republic.

While many global investors shied away from participation in developing economies, Bedian used his unique knowledge and contacts to introduce effective strategic business alliances into markets that were in dire need of investment and high level guidance. His commitment to the development of free market economies and civil society, combined with successful management techniques and the development of business concerns for commercial entities the world over, have forged Bedian's reputation as a hands-on, pro-active conduit between culturally diverse financial, entrepreneurial, developmental, and political interests.

Born in Aleppo, Syria in 1960, Gary H. Bedian immigrated with his family to the United States in 1975 at the age of 15 where he attended high school graduating in 1978. He later continued his education and e