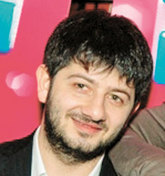 Armenian Russian comedian born in Sochi in 1979. Since early age he showed big talent in memorizing and performing anecdotes.

His television comedy show “Nasha Rasha” has achieved cult status since it launched in 2006. The title “Nasha Rasha” comes from a play on words and the English pronunciation of Russia and translates to “Our Russia”.