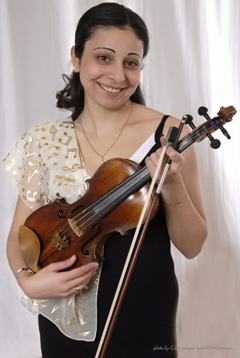 She began her study on the violin at the age of seven in Music School with professor Paris Yerkanyan.Due to fine skills and  natural musicality she's been admitted to Music College after R. Melikyan in 1995.In 1999 Ani Umedian was granted a full scholarship for her outstanding talent, allowing her to pursue her musical training at the Yerevan State Conservatory under professor Bagrat Vardanyan,an outstanding musician and teacher. She graduated YSC  in 2004, specialized in solo violin and chamber music with Master Degree.

Since being a student, Ani played a great number of concerts in Armenia, Europe, Australia, Iran.Participated in various music festivals and master courses in Europe and Australia.  At the age of 20, she was selected to perform Bach's double violin concerto with Yerevan Youth Chamber Orchestra and conducted by Mr. David Harutyunyan(currently a principle conductor of Guayaquile Symphonic Orchestra). This recording was produced by “Naregatsi” Art Center.