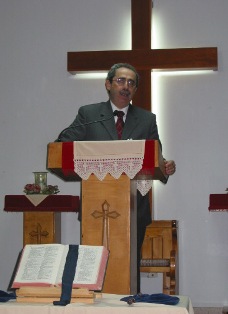 Active in community and church life. Member of the Armenian Evangelical Church in Lebanon (Congregational). Past treasurer of the Central Committee of the Union of the Armenian Evangelical Churches in the Near East. Past Member of the Board of Trustees of Haigazian University in Beirut, Lebanon. Past treasurer and presently Trustee of the Near East School of Theology in Beirut,  Lebanon. Past treasurer of tuberculosis Christian hospital in Mount Lebanon.  Chairman of Arabic Media Convention (an organization that brings together Christian Media and Publishing organizations that work in and for the Middle East). Treasurer; Central Committee to commemorate the Armenian Genocide in Lebanon.

Initiated and assisted in the re-formation and re-organization of the Armenian Evangelical church in Cyprus in 2001 after a “break” of 26 years.

Living in Nicosia, Cyprus as of August 2005. This is because the office of the Bible Society in the Gulf was moved from Beirut, Lebanon to Nicosia, Cyprus.

Married to Arda and have two children. Son Vahe 13 years old, and daughter Alik, 11. Played basketball for more than fifteen years. Music and reading are some of the hobbies.

Hrayr Jebejian: Executive Secretary of the Bible Society in the Gulf
The March for Truth and Righteousness
New Year and Christmas celebrations
Identity, religion and challenges in a post modern society
Presentation of children's Bible in Nareg schools
Mario