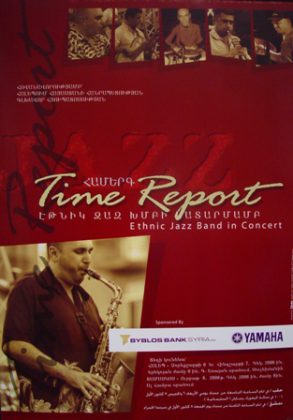 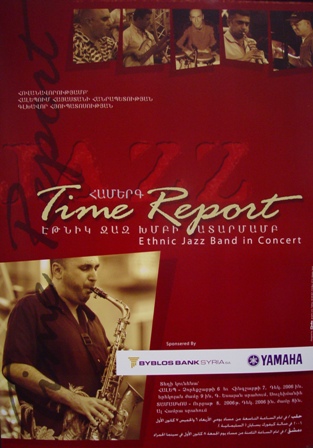 Armenian music has traversed a millennial road, expressing the feelings and emotions of its people. Progressing from century to century, it has been enriched by fresh nuances and sealed with the stamp of successive eras, without relinquishing its traditionally accumulated patrimony. For the fortuitously significant and pivotal time period was distinguished in 301 A.D. with the acceptance of Christianity as the state religion. Hence, the development of Armenian music took a new direction and a new impetus, rooted in the rich experience of its pagan heritage. And through time, Armenian music has flourished according to its own inherent rules, thus creating and preserving its unique national character.

I chose the title “A Journey of Passion” because most of the people, who witnessed the concert of the ethnic jazz group “Time Report” on the 7th of December 2006 in Aleppo, Syria, returned the next day to enjoy another two hours of great music. And as they had a big passion for Jazz music, they came once again to ride the magic carpet and be a part of this Journey.

Through the concerts, “Time Report” brought to the listeners music from different ages, cultures and directions in a totally new synthesis of a far reaching kind and a magnificent blending. There were music from Gomitas, like “Gakavik” (The Quail) and “Raining” represented together with the European saxophone, the electronic keyboard and the traditional folk duduk and zurna. The audience enjoyed folk music like “Shoushiki” with a special arrangement of Armen Hyusnunts and “Yerangi” or what is known as “Vagharshabadi bar” (Dance of Vagharshabad). There was appreciation to the music created by composer Khatchig Sahagian such as “Dance of solitude” and “Delirium Caravan” and a very special track “Huys” (Hope) composed by a dear friend, famous pianist David Azarian, who passed away two years ago. 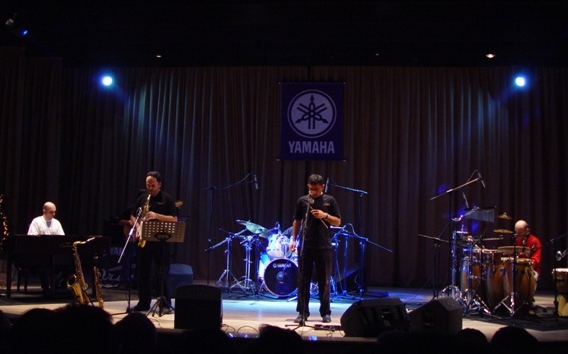 I met the group and had this little conversation with Armen Hyusnunts, one of the founders of the band.

Back to early years, how did the group members get together?

I used to play together with Khatchig Sahagian in other bands for a long time, but it was in the years 1984 ? 1985 when we decided to form our own band because we had the same taste and genre of music and we felt the need to reflect what we had in common. Through years the image became clearly enough, I mean the style and even the way of our thinking. Vartan Arakelian was the first addition to the group. At that time we had another drummer, but now Arman Jalalian is replacing him. Then Edward with his magnificent percussion skills joined the group.

For many years we had concerts as a quintet band and we were well known to the public as a quintet, though there were some guests who played with us during the studio recordings, one of them namely Vartan krikorion, who played with us as a guest in some concerts, but then he decided to join the band and I can say now that he is our official sixth member for the last 2-3 years.

We released our first two albums as a quintet. Then we made an album with a selection of works from these two CDs, but this time with six members, adding also some of our previously unreleased tracks, especially those that used to grab the attention of the audience.

You have been in before, how did you find the city and the appreciation of the audience to your music this time?

My first visit to was in 1990, when I was playing with the Jazz Quartet of Ardashes Kartalian. The band was accompanying “The Chamber Theater“. At that time we had a chance to perform couple of jazz concerts separately from the theater shows, and I remember the warm welcome of the audience and their appreciation to our music. I returned to with this good impression about and its people. I even made some friendships during my nearly one month stay in Aleppo. Since then I visited Aleppo once more in 1995 (I guess) when I participated, together with other Armenian musicians, in the “Jazz Caravan Festival” organized by the French Cultural Center (of the French Consulate) in Aleppo, but the visit was very short. We had one concert in and another one in , and since I was playing with other people within a collective work, I didn?t have the chance to introduce the kind of music that I like. The appreciation was not bad, but not as I was expecting; not as I experienced during the current visit. I feel that, through our music, we succeeded to reach out to the people and touch their souls. 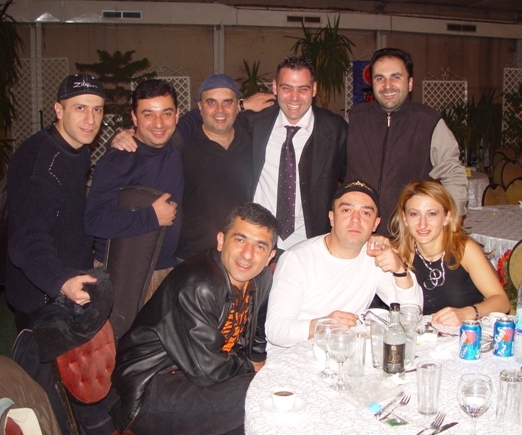 And what about the concert?

It was perfect and we had a chance to meet foreign people too. There were some Arab students of the State Conservatory in and some foreign musicians too. The audience was more refined. We felt that there was a special elite, who came to listen only to a quality music, which excited us more. Our preformance was at its best after we felt the positive respond of the audience. At the end of the show we exchanged email addresses with some musicians, who came to congratulate us and to introduce themselves as well.

What are the future plans of the band?

We are working now on releasing our fourth album, from which we played few tracks during the recent concerts. We are trying to give our fans something new, different from the previous works but within the “Time Report” flavor and style.

There are some offers to participate in different Jazz festivals and activities. We are still negotiating; nothing is confirmed yet as long as our music is the kind of art that needs technical support on one hand, and sponsoring on the other.

In the name of all Azad-Hye staff we wish you all the best in your plans and have a safe trip back home.