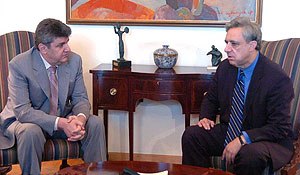 Conference title: “The challenges of the 21st century and the Armenian youth”

Ara Abrahamian: “We should cooperate with Armenian and foreign youth organizations”

“Young people not only speak of current issues, but also offer concrete mechanisms to solve those issues”, announced the President of World Armenian Congress (WAC) Ara Abrahamian in a press conference at the end of the All Armenian Youth International Conference. He mentioned that various proposals were made during the 2-day works of the Conference.

Abrahamian informed that youth organizational branches would be opened in the provinces of Armenia. It is foreseen also to hold an International Festival in 2009, where young people of different nations will take part. He expressed the wish that the Armenian youth would be involved in international organizations and become ambassadors of national interests of the Armenian people in the countries they live.

On 11 July 2007 in Catholicos of All Armenians Karekin II received the representatives of more than 40 Armenian Youth Organizations of 25 different countries who took part in the Conference. The Catholicos emphasized on the role of the Armenian youth in the society. He mentioned that the challenges discussed during the Conference are the most imminent ones and they would shape the future of Armenia in the coming decades. This is why those issues should be solved with the sense of national unity, he commented.

“The national spirit wakes up and it is the guarantee of the nation?s preservation”, His Holiness mentioned. He gave his blessing to the young people saying, “May each of you become an honest citizen of our country, reach heights in your spheres and be of use for the welfare of the Armenian nation”.

The Diaspora and the Cold War

A few days ago, tourism in Armenia drastically increased. About 250 young people from 25 foreign countries have arrived in Yerevan to participate in the pan-Armenian international conference. The organizer was the chair of the International Armenian Congress (more correctly the Armenian union in Russia), Ara Abrahamian. The man has done a good thing to unite the Armenians living in different corners of the world. These young people have socialized, discussed the challenges of the 21st century, visited Tsitsernakaberd, Garni-Geghard? Shortly said, it was all good.

The conference even had a slogan. It approximately sounded this way: ?We are strong when we are together.? In general, strength is a good thing. You just need to know what to use it on. What issues are the young people going to solve after they unite? Unfortunately, this question didn?t get a concrete and satisfactory answer during the conference.

Of course, many senseless ideas were heard. For example, withstand the challenges of the 21st century, resolution of the Karabakh conflict on our behalf, becoming ambassadors of Armenian interests in the countries where the young people live, etc.

But don?t rush to underestimate the activities of the Armenians of the Diaspora. There were extremely concrete recommendations on how to resist the challenges of the 21st century and how to maintain one?s Armenian identity. For example, in one of the sections they were suggesting to persistently fight against globalization, and in this framework prohibit the sale of Coca-Cola, potato chips and American films. We of course understand how dangerous potato chips are for our national identity and how Coca Cola deforms the genetic code of our biblical nation, but nevertheless it?s strange when, for instance, a young man from Orenbourg or Beirut gives himself the right to decide what the local Armenians must or must not eat in the Republic of Armenia. Although, on the other hand, the intentions of the crusaders against this American product are quite understandable.

Ara Abrahamian wasn?t able to include the US Armenian community in his Congress. Besides, he is a Russian citizen (and not a regular citizen), and at present the relations between Russia and the US are quite tense. Simply said, tensions between the two countries are gradually increasing, more and more resembling the cold war period.

Theoretically, this opportunity exists. For that, we only need one thing. Armenia as a country must clearly define its state interests and guide itself exclusively by its state values and interests. This will enable the Diaspora to unite around those interests and understand exactly what they need to do. But as the definition of state interests is not used any more and instead the term ?national interests of the Armenian people? is used, the Diaspora really gets confused. That?s the reason some of them are offering to ban the sale of Coca Cola and some days others may suggest to ban showing Russian soap operas in Armenia or the sale of vodka, etc. It?s not known how Armenia can possibly benefit from it. The important thing is to be together and strong.