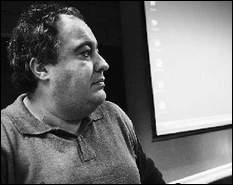 
An internationally influential center for Armenian studies in is changing the guard this week and installing only the second director in the center's nearly two decades of scholarship.

This week, the 's founder, Dennis Papazian, officially retires as he welcomes Ara Sanjian, an Armenian historian from , to run the facility at the University of Michigan-Dearborn.

“It's wonderful that we're finally making this move in a formal way,” Papazian, 74, said last week. “My wife and I moved to two years ago and I've been running the center since then by e-mail, telephone and frequent visits. But now I'm formally leaving it to this first-class scholar who we actually searched around the world to find.”

Sanjian, 38, was born in the large Armenian community based in . He studied in and , then earned a doctorate in Middle Eastern history from the of in . He moved to from earlier this year. He is fluent in English and also works professionally in Armenian, Arabic, Russian, Turkish and French.

“In coming to the center, I do represent a kind of bridge in a number of ways,” Sanjian said last week. He is settling into , the heart of 's Arab-Muslim community, already familiar with Middle Eastern issues from his many years in . Plus, he has dedicated his scholarly life to bringing cross-cultural lessons from Armenian-Christian history to the larger world.

“ has centuries of experience to share with the world,” Sanjian said. “Armenians have been around as an identity for more than 2,500 years, as a Christian nation for 1,700 years and as a written language for 1,600 years.”

However, the future of was in doubt for much of the 20th Century from the Turkish government's massacre of Armenians in the early part of the century, through decades of domination by the .

Papazian recalled, “When I founded the center for Armenian research in the late 1970s, I really was helping with the worldwide effort to preserve Armenian heritage and prepare for the day when could reemerge onto the stage of world history.

“Since 1991, has been an independent state. Now, 's economy is growing. We've just built a new American embassy in and it's become a very pleasant place for tourists.”

Plus, Papazian said, will continue to play a small but crucial role in global politics because “ walks a tightrope between the , and .”

“We estimate there are about 1 million Armenians now living in the , most of them concentrated in ,” Papazian said. “No one has an exact count in the area, but we think there are 30,000 Armenian Americans living there.”

More than 60 students have enrolled in history courses taught by Sanjian, including general history classes. But the center reaches scholars far beyond campus.

At this point, Sanjian said, the center's nearly 40,000 books, maps, articles and artifacts related to are drawn upon by people around the world.

Showing a visitor through the rows of steel bookshelves in the center's archive, Sanjian said, “People do come here regularly to do research in person. But constantly, we're also getting e-mail inquiries, too.

“So, and our center now are an important part of the virtual world, too.”

Photo: Ara Sanjian, 38, of speaks at the University of Michigan-Dearborn last week. His doctorate is in Middle Eastern history. “ has centuries of experience to share with the world,” he says. (KATHLEEN GALLIGAN/Detroit Free Press)