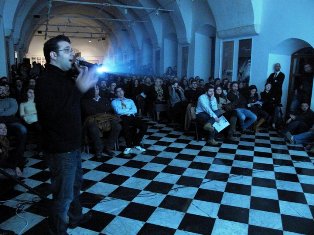 At the end of year 2010, Aleppo became the 273rd city to join the Pecha Kucha (PK) events around the world. But what does Pecha Kucha stand for?

The Japanese term pecha kucha means chit chat and it rests on a presentation format based on a simple idea: 20 images x 20 seconds; a format that makes presentations concise, and keeps things moving at a rapid pace. So the presenter shows 20 images, each for 20 seconds. The images forward automatically and he/she talks along to the images.

PK Nights are informal and fun gatherings where creative people get together and share their ideas, works, thoughts, holiday snaps – just about anything really, in the 20×20 format.

The key to a great presentation is to present something you love. Most people use PK Night to present their latest creative projects or work. Good presentations are the ones that uncover the unexpected, unexpected talent, unexpected ideas. Some PechaKuchas tell great stories about a project or a trip. Some are incredibly personal, some are incredibly funny, but all are very different making each PK Night like 'a box of chocolates'.

First Pecha Kucha Night was held in Tokyo in February 2003 as an event for young designers to meet, socialize and show their work in public. Soon it has turned into a massive celebration, with events happening in more than 230 cities around the world including Damascus, Amman, Beirut, Doha, Yerevan and others, inspiring creative people.

Aleppo joined this global chain of events on 12 December 2010. Organizers were Harout Ekmanian, Peno Mishoyan and Angelique Sanossian. All of them have attended Pecha Kucha events in different cities and they strongly wanted to bring Pecha Kucha to Aleppo.

Harout contacted the main company Klein Dytham Architecture studio, which is based in Tokyo and owned the Pecha Kucha. After few discussions the studio granted Harout the license and the right to organize those events in Aleppo.

The first Pecha Kucha Night Aleppo had a motto called “Arreb jarreb“, a common slang phrase which means “come closer and give it a try“. It was held in Art River, a caf? library and a perfect venue for many cultural events in the city. There were seven presenters, among them a caricaturist, an astronomy fan, a fashion designer, graphic designers and photographers.
Prior the event, the organizers had doubted about the people reaction. They even worried they could face some difficulties. But after the big success of the first night it turned out that PK was a piece of cake, just like a Falafel sandwich. This concept lead them to the idea of setting the second PK night motto; “Falafel“.

Falafel is a Middle Eastern food consumed by everybody; the poor and rich, young and old, just like Pecha Kucha stage. It is open to everybody without any barrier.

However, they made a promotional video about the event and it was posted on youtube (see youtube clip here) and their facebook page “Pecha Kucha Night Aleppo“. The video, which was a scene taken from a Lebanese movie, emphasized the idea that people should think of becoming unique and genuine, to be creative and far from copying others. Just like the runaway piece of falafel that unlike the other pieces it separates from the group and floats on top during the frying process in the hot oil. You should see the youtube video to understand this idea.

What Angelique, Harout and Penig tried to tell people via Pecha Kucha 2 was to think of coming up with new ideas, very creative and positive ones, and share them with the others. Sharing will only enrich those ideas and it will help to get moral support for this creative people from the others. Maybe it will also help finding partners and supporters as well.

The second Pecha Kucha Night Aleppo was held at the historic Shibani building in the Jalloum Street of the Old City on 27 February 2011. The building was a home of many cultural and development organizations like Goethe institute and Aga Khan. Besides, many local and international cultural events were also being held in the same place.

Goethe institute was a co-organizer. They helped in organizing the event by providing all the necessary equipments. “Zahra Theatre” sponsored the catering during the event. 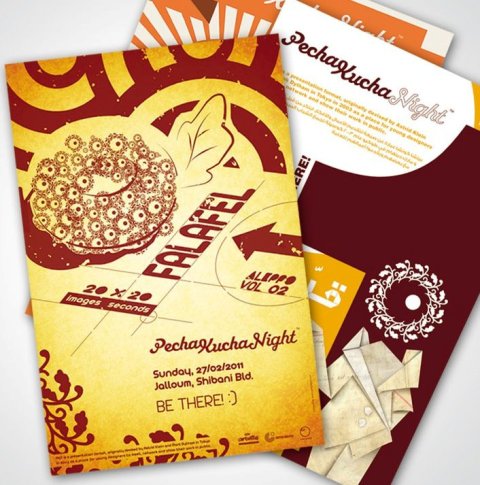 The Third event?s date is already announced April 3, 2011. Anyone who has a creative idea or work can fill an inquiry through the official webpage or directly contact the organizers.