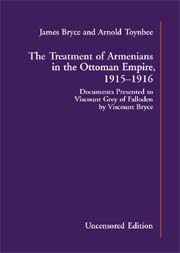 We are responding to the letter to the British Houses of Parliament contesting the integrity of a British Parliamentary Blue Book published in 1916, signed by Members of the Turkish Parliament in April 2005 (?the letter?)

According to the letter, the report in question, ?The Treatment of Armenians in the Ottoman Empire 1915-16? (?the Blue Book?) was a wartime fabrication, which harmed Turkish interests during World War I and continues to do so today. The central thesis of the Blue Book was the argument that starting in 1915 Armenians were subjected to a policy of mass annihilation in the . The letter claims that the Blue Book was the source of allegations that the massacres and deaths of Armenians during the forced deportations of 1915-16 constituted a Genocide, which the letter says is untrue.

The letter says that:

1.? the 1916 report has no supporting documentation;

2.? the report is contrived in essence, and

3.??the main compiler and editor of the report admitted that the Blue Book was simply a propaganda tool fabricated against Ottoman and its German allies.

The letter insists that the core of the Blue Book was a set of eyewitness accounts which were unreliable, and that the work was composed in such a way as to conceal the flawed character of these key reports. It maintains that withholding the names of some informants and locations, supposedly to safeguard sources still in the , was in reality, to conceal the weaknesses of the reports themselves.

We are satisfied, from our knowledge of the Blue Book itself and of many other contemporaneous accounts by eyewitnesses which have since been published, and? from consideration of the following report from the Gomidas Institute (UK) that:

1.? the Blue Book? was compiled from first-hand testimonies which were scrupulously reported by the distinguished editor, Arnold Toynbee;

2.? the supporting documentation is readily accessible, a point overlooked in the letter

3.? Toynbee did not say that the Blue Book was flawed as claimed by the letter.

4.? the letter wrongly asserts that the War Propaganda Bureau was the sole source for all information regarding the situation in the Ottoman Empire ? there were hundreds of neutral consular officials and missionaries;

5.? the reports by neutrals have been reinforced and corroborated by other United States and German consular reports, now in the public domain, and by numerous accounts in the diaries and letters of survivors;

6.? the sources of the 150 eyewitness accounts published in the Blue Book were not discovered recently in a War Propaganda Bureau document, but have been known and published for many years

We do not believe that the letter reflects opinions of Turkish scholars who know this subject; on the contrary, it shows that the Turkish Parliament is not properly informed about the Blue Book. We invite them to a round table discussion, with our academic advisers, in the hope that we can formulate a common statement on the historical?facts, and in the meanwhile we invite them to withdraw their letter to the British Houses of Parliament, in the light of this Response.

Earl of Mar and Kellie