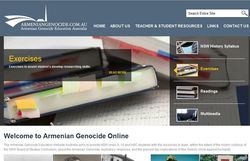 SYDNEY: The Armenian Genocide Education website (click here to see website), designed to assist Australian history studies teachers and their students to respectively teach and learn about the Armenian Genocide, was launched at the ANC Australia Annual Banquet on 25 November 2011.

A project of the Armenian Historical Society of Australia (AHSA), the website provides more than 280,000 NSW students from years 9, 10 and HSC students with the resources to learn about this historic event, its relevance to Australia and its present day implications, within the extent of the history syllabus of the NSW Board of Studies Curriculum.

The Teachers Resources page describes those areas in the history syllabus where there is scope for the teaching of the Armenian Genocide.

The information is supplemented with video, images, maps, reading lists and student exercises to provide NSW history teachers and students with the necessary academic tools for teaching about and studying this tragic event in the history of the world.

ANC Australia Executive Director Varant Meguerditchian who announced the launch at the ANC Australia Banquet, highlighted the importance of the website.

?In recent years, students from across New South Wales studying the Armenian Genocide as part of their history curricula have approached our office to attain additional student resources,? said Meguerditchian.

?This led us to the conviction that genocide education is a fundamental responsibility of descendants of Armenian Genocide survivors.?

?Subsequently, we set to work, closely with our colleagues from the Armenian Historical Society of Australia, to create the Armenian Genocide Education website.?

?In addition to information relating to the Armenian Genocide during which the systematic campaign of mass deportations and killings adopted by the Ottoman Turkish authorities resulted in the annihilation of about 1,500,000 innocent Armenian men, women and children, the website contains resources relating to Australia?s response to this crime against humanity.?

Impressed by the educational value of the website, Mr Heros and Mrs Kate Dilanchian signed up as the 2012 Research Sponsor for the Armenian Genocide Education website.

The website was populated with content by education professionals and genocide experts, including Dr Panayiotis Diamadis and Mr Vicken Babkenian of the Australian Institute for Holocaust and Genocide studies.

Founded in 2008, the AHSA is a not-for-profit organisation established with the objective of gathering and recording the contributions of the Armenian-Australian community, researching the mutual history of the Armenian and Australian peoples and promoting and educating the Australian public about major episodes in the history of Armenia.

AHSA is a member of the History Council of New South Wales.