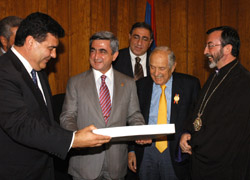 Kevork Hovnanian, a long-time leader of the Diocesan community (Diocese of the Armenian Church of America  – Eastern, Etchmiadzin related), was honored on June 26, 2007, during a ceremony in Yerevan, Armenia.

A delegation led by Archbishop Khajag Barsamian, Primate of the Diocese of the Armenian Church of America (Eastern), that included members of the Diocesan Council and the Board of Directors of the Fund for Armenian Relief, attended the ceremony.

In presenting the honor, the Prime Minister recognized Hovnanian's years of service and stewardship to the Armenian people.

Hovnanian is the founder and honorary life chairman of the Fund for Armenian Relief (FAR), the Diocesan-affiliated development organization which is one of the preeminent relief organizations working in Armenia.

“Mr. Kevork Hovnanian is an example of one man taking action to improve the lives of others,” Archbishop Barsamian said. “Through his efforts the people of Armenia today have more hope, access to increased opportunities, and are empowered to strengthen their own civil society.”

Hovnanian joined Archbishop Torkom Manoogian, then-Primate of the Eastern Diocese, and Dr. Edgar Housepian in traveling to Armenia shortly after the devastating 1988 earthquake. The trio led the Diocese's immediate efforts to provide shelter, food, water, and medical care to the Armenian people hardest hit by the tragedy — an effort that led to the creation of an independently operated Fund for Armenian Relief (FAR).

Since then, FAR's mission has evolved from assuring survival to providing hope, opportunity, and empowerment. Under Hovnanian's leadership, FAR has served millions of people through more than 220 relief and development programs in Armenia and Karabagh. It has channeled more than $265 million in humanitarian assistance by implementing a wide range of projects including emergency relief, construction, education, medical aid, and economic development.

Hovnanian stepped down as chairman of FAR last year, but was unanimously named Honorary Life Chairman by the FAR board. 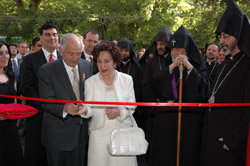 During the joint tour of Armenia by the Diocesan Council and the Board of Directors of the Fund for Armenian Relief (FAR), the leaders of the Eastern Diocese attended a moving ceremony opening the newly renovated FAR office building in Yerevan, which was named in honor of Mr. and Mrs. Kevork and Sirvart Hovnanian.

More than 100 guests attended the dedication service on Friday, June 29, 2007. His Holiness Karekin II, Supreme Patriarch and Catholicos of All Armenians, presided over the event.

Armenian Foreign Minister Vartan Oskanian told the assembled guests that the newly renovated building was a testament to FAR's commitment to staying in Armenia and working for a strong future.

Prior to the evening's celebration, the Foreign Minister Vartan Oskanian, Archbishop Khajag Barsamian, FAR Board Chairman Randy Sapah-Gulian, and Kevork Hovnanian met. During the session, Hovnanian pledged to donate $500,000 so FAR could adopt the village of Zankakadoon in the Ararat region of Armenia.

The money will go towards providing infrastructure upgrades and supplies to the village, the hometown of beloved Armenian poet Baruyr Sevag. The village adoption is part of the Rural Poverty Eradication Program being conducted by the Armenian Foreign Ministry and the All Armenia Fund.