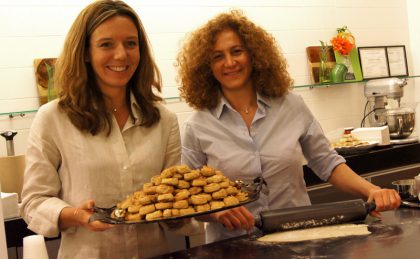 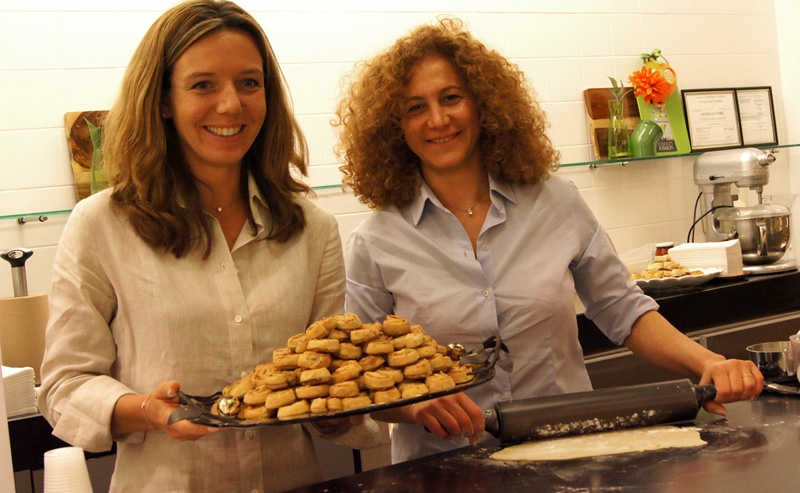 New Armenian Cookbook Sells Out on Tour Across U.S. and Canada

In April (2012), co-authors Aline Kamakian and Barbara Drieskens from Lebanon wrapped up a month-long, AGBU-coordinated tour across the U.S. and Canada to promote their widely acclaimed publication “Armenian Cuisine.” Equal parts cookbook, photo essay, and oral history, the recently released hardcover is quickly finding its place on kitchen counters and coffee tables in homes around the world.

The book's concept was developed by Kamakian, who, as a Lebanese-Armenian chef and owner of the renowned Beirut restaurant, Mayrig, had two goals for the project: the first, to record her mother's cherished recipes, and the second, to resolve her clients' questions about why the Armenian foods listed on Mayrig's menu were known by Turkish names. Her quest for answers took her to the ancestral Armenian land of Cilicia (present day southeastern Turkey). Knowing her talents lay more in cooking than writing, she forged a collaboration with Drieskens, a trained anthropologist who had recently left the academic world. The two embarked on an emotional three-week journey across almost 2,000 miles to trace the roots of both Armenian food and people, in a place where neither seemed to have survived. The result is a striking volume filled with 139 classic recipes and hundreds of photographs of landscapes and natural foods that have made it a 2012 New York Photo Festival contender.

As Kamakian and Drieskens chronicle throughout their trip, they struggled to reconcile the land's beauty with the horrific atrocities that had been committed there. They were alarmed to see centuries-old Armenian churches in ruins and the Armenian language completely unspoken. However, they soon found that the region's Armenian history was being preserved through traditional cooking. While they spent time with local families, many the survivors of the Armenian Genocide who are profiled in the book, the authors realized that the kitchen was where the past was recounted. It was “a place where people told the most depressing stories, the ones that would be very difficult to discuss under any other circumstance, but somehow were easier to tell through cooking, because the food was a way of escaping the tragedy,” as Drieskens described at a recent presentation in the AGBU Central Office, organized by the AGBU Young Professionals of Greater New York (YPGNY). Through traditional dishes, such as mante, urfa kebab and dolma, some of the many highlighted in the book, they discovered that the people of Cilicia have kept Armenian culture alive for generations.

Before the “Armenian Cuisine” tour culminated at the 2012 Los Angeles Times Book Festival on the weekend of April 20th, it brought Kamakian and Drieskens to various cities, including Montreal on April 15th, Boston on the 18th, New York on the 19th, and New Jersey and Philadelphia on April 20th. At each stop, groups had the opportunity to listen to the women's stories from their trip, watch them prepare food, and sample various dishes. In Montreal, Kamakian and Drieskens guided participants through making recipes, while in Hackensack, New Jersey, at the Bloomingdale's department store, over 60 attendees purchased all the available copies of the book after watching them demonstrate both an appetizer and dessert. That was the case at every venue, with some guests purchasing several copies to help spread awareness of the valuable publication. Karina Ambartsoumian, YP Philadelphia Chair, commented, “The audience was absolutely captivated by Aline and Barbara's journey, experience and findings. We saw that the food truly brought people together, sparking conversations among Armenians, non-Armenians, and foodie enthusiasts.” Everyone, she described, enjoyed fresh plates of Armenian Nut and Olive Salad, Bride Fingers, and the Philo Dough Pastry with Walnuts.

For their next endeavor, Kamakian and Drieskens plan to translate the book for the Turkish public. Kamakian sees its great potential to initiate a dialogue about the past, because “it is a way to learn about what has happened without having to read a history textbook, which makes it very accessible to everyone,” as she noted at the recent New York event. Until then, the current edition will continue to draw families around the dinner table to enjoy all it has to offer.

For free recipes and more information on “Armenian Cuisine,” please visit: http://www.armenian-cuisine.com/index.htm. To purchase copies in the US, please email [email protected].

Author Barbara Drieskens and Aline Kamakian sign copies of 'Armenian Cuisine,' which sold out at many stops on the book tour.

Newer PostMashtots Park kiosks being dismantled before the elections
Older PostArsen Julfalakyan: Sportsman with a degree in international relations