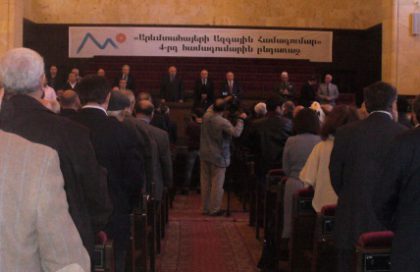 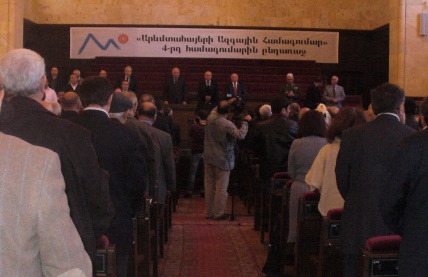 Meeting in Yerevan ahead of the upcoming conference in Paris

It initiates and supports activities to safeguard the Armenian culture and heritage, assists in defining the losses and damages suffered by Western Armenians in Turkey since 1915. It also establishes contacts and working relationships with civil society organizations dealing with issues related to human rights, minority rights, genocide and crimes against humanity.

In preparation for the 4th conference scheduled to take place in Paris, in April 2015, a preliminary meeting was held in Yerevan on 19 October 2014, attended by members of national patriotic organizations, public figures, official personalities, etc. Azad-Hye representative was there too.

?The first two conferences of the Western Armenians were convened in 1917 and 1919 with eminent focus on dealing with the conditions of refugees at that time. The , 3rd conference took place many years later in Sevres, Switzerland in 2011, during which it was decided to register the organization in Paris and at relevant United Nation bodies. The main purpose of the organization is to defend the rights of the Western Armenians who are descendants of the Armenian subjects in the Ottoman Empire?

The upcoming conference will call upon all the people living in Turkey, the world community and international public opinion to adopt clear initiatives in favor of reinstating the rights of the Western Armenians

Member of National Assembly (Parliament) of Armenia Edmon Marukyan said: ?For 100 years we have emphasized the violation of the rights of the Armenians. We need to strengthen our country first, and then work on transferring the issue related to Western Armenians into the legal field?.

Sevak Artsruni, Secretary General of NCWA, referred to the formation of a small coordinating body in Turkey to aid the activities initiated by the descendants of Western Armenians who are still surviving in Turkey. There is a need to research their current situation, he underlined.

Deputy Aragats Akhoyan underlined that the Congress has been extremely active in the past few years. It has sent 18 delegations to Turkey, trying to come into contact with the local Armenian elements there,

The Conference scheduled for April 2015 will result in a declaration on the legal and political rights of the descendants of the Western Armenians. It will call on Turkey to restore the rights of Western Armenians after one hundred years of continuous violations.

Newer PostArman Manukyan introduces a new Armenian perfume
Older PostKhachik Asryan: From the standpoint of our security, it was the right decision to join the Eurasian Customs Union