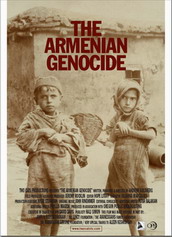 New York, NY (January, 2006) — “The Armenian Genocide” is the complete story of the first Genocide of the 20th century ? when over a million Armenians died at the hands of the Ottoman Turks during World War I.?This unprecedented and powerful one-hour documentary, scheduled to air April 17th on PBS, was written, directed and produced by Emmy Award-winning producer Andrew Goldberg of Two Cats Productions, in association with Oregon Public Broadcasting.

Featuring interviews with the leading experts in the field such as Pulitzer Prize-winning author Samantha Power and New York Times best-selling author, Peter Balakian, this film features never-before-seen historical footage of the events and key players of one of the greatest untold stories of the 20th century. The Armenian Genocide is narrated by Julianna Margulies and includes historical narrations by Ed Harris, Natalie Portman, Laura Linney and Orlando Bloom, among others.

?What the word ?Genocide? connotes is a systematic campaign of destruction. If you simply call the horrors of 1915 ?crimes against humanity? or ?atrocities,? it doesn?t fully convey just how methodical this campaign of slaughter and deportation really was, and I think that?s why historians look at the record and they really can come to no other conclusion but that this word, Genocide, applies to this methodical campaign of destruction,? says Samantha Power.

Filmed in the US, France, Germany, Belgium, Turkey and Syria, the program features discussions with Kurdish and Turkish citizens in modern-day Turkey who speak openly about the stories told to them by their parents and grandparents.

To this day, denies the Genocide occurred and maintains this position steadfastly. The film includes testimony by former Turkish Diplomat Gunduz Aktan to lawmakers in the year 2000, where he explains the official Turkish position on the issue.??The Turkish people firmly believe that what happened to the Armenian people was not Genocide,? Aktan says.

?As seeks to join the European Union, 90 years later, this film can give people a much better understanding of why this issue is such an important and current part of the international conversation about 's role in the world today,? said Goldberg.

-Two Cats Productions is a documentary production company in led by Andrew Goldberg. His television credits include PBS, ABC News, E!, CNN, and countless others. In addition to documentaries, he has also written and produced commercials for such companies as Bell South, Sephora/Louis Vuitton, AT&T and PetSmart. Goldberg and Two Cats? recent documentary productions include, A Yiddish World Remembered for PBS which won an Emmy in 2002, and The Armenians, A Story of Survival, which aired on PBS stations nationally in 2002 and was awarded the CINE Golden Eagle.

Above text is circulated for immediate release by Hali Simon of Hali Public Relations: http://www.halipr.com/

Comment: We recommend circulating the document in several languages including Arabic.