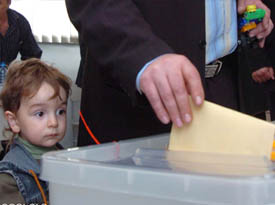 Today, European Commissioner Benita Ferrero-Waldner “commended the people of Armenia and their leaders” on the fact that the May 12 parliamentary elections were conducted largely in accordance international standards for democratic elections.

This declaration followed the publication of a joint statement by the OSCE's International Election Observation Mission, which concluded that the elections “demonstrated improvement from previous ones” and were “largely in accordance with international commitments”.

Ms Ferrero-Waldner added that “Armenia has thus made an important step forward in fulfilling a key priority of the EU / Armenia Action Plan under the European Neighbourhood Policy. I am confident that the new parliament, together with the new government, will continue firmly on the path of reform. This is vital for the Armenian people as well as for the future of our relationship.”

Marie Anne Isler Beguin, who headed the EP delegation in Armenia, concurred: “with their participation in these elections, Armenian citizens have made a further step towards European democratic values as foreseen and promoted by the EU Neighborhood Policy. The EU delegation encourages the Armenian people to continue in this direction in view of forthcoming elections.”

Leo Platvoet, the Head of the delegation sent to Armenia by the Council of Europe's Parliamentary Assembly, shared in the general enthusiasm: “we congratulate the Armenian people on showing the will to hold democratic elections. Some challenges remain, such as intertwining between political and business interests and improvements are still needed to the electoral complaints procedure. The Council of Europe and its Assembly continue to stand ready to assist Armenia in this process.”

Europe's positive assessment of the electoral process in Armenia should be of considerable importance to the future of the relationship between the EU and Armenia.

The party that obtained most votes in the elections was the ruling Republican Party, followed by Prosperous Armenia, the Armenian Revolutionary Federation, the Rule of Law Party and the Heritage Party. Other parties did not pass the 5% threshold.

Armenia's largest vote-monitoring organization echoed on Monday international observers' largely positive verdict on Saturday's parliamentary elections which it said were more democratic than the previous ones.

The non-governmental organization It's Your Choice (IYC) monitored the election campaign and deployed about 4,000 observers in most of the polling stations across the country on voting day.

“These elections were better and took place in a more civilized atmosphere than the past elections,” the IYC chairman, Harutiun Hambartsumian, told RFE/RL, presenting their preliminary findings. “Of course, there were shortcomings, violations. But there was a clear improvement.”

Hambartsumian said the Armenian authorities failed to create a level playing field for all major contenders and used their control of election commissions and other “government resources” to retain a comfortable majority in the National Assembly. He said IYC observers did not witness instances of vote buying which opposition parties claim were widespread. But he said they did see busloads of people transported to polling stations.

“There was busing of individuals to polling stations that became overcrowded, complicating the voting process,” Hambartsumian said. “Besides, our observers saw ballot stuffing attempts in a number of polling stations. There were also instances of multiple voting.”

“Since those violations were not widespread, they could not have affected election results,” he added.

However, representatives of two coalitions of civic groups that monitored the vote in the northern cities of Gyumri and Vanadzor were far more critical of the authorities' handling of the polls as they spoke at a news conference in Yerevan. Levon Barseghian, chairman of Gyumri's Asparez Press Club, said he and other local NGO observers found clear indications of widespread vote buying in Armenia's second largest city.

“Groups of four to five people went from house to house and took voters to polling stations throughout the day,” Barseghian said. “I presume that it had to do with vote buying. This was a very good mechanism for dishing out vote bribes. They thereby managed to involve a large number of people in the process.”

Artur Sakunts, a human rights campaigner from Vanadzor, claimed that an “atmosphere of fear” reigned in the city and all over the northern Lori region even before the vote. “The so-called administrative resources were broadly used in schools and other public institutions,” he said. “As well as enlisting voters in the Republican and Prosperous Armenia parties en masse, [local authorities] warned people not to support or vote for other parties.”


Opposition leader Stepan Demirchian accused Western powers on Monday of turning a blind eye to what he called a repeat of serious electoral fraud in Armenia.

While noting that the alleged irregularities were mainly “invisible” and “difficult to detect” this time around, Demirchian said: “This is not the first time that big powers subordinate democratic principles to geopolitical interests.” He would not specify what those interests are.