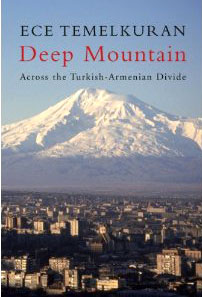 The project — which was borne from conversations the author had with Hrant Dink, the assassinated editor of Agos newspaper – draws on interviews with a wide-range of Armenian writers, thinkers and activists including poet Silva Kaputikyan (who passed away in 2006), musician Arto Tuncboyaciyan and filmmaker Serge Avedikian.

A well-known journalist and political commentator in Turkey, Temelkuran writes regularly for the online Turkish newspaper Haberturk and has won numerous awards for her work, including the Pen for Peace Award and Turkish Journalist of the Year.

On May 21 Temelkuran sat down with Taleen Babayan for an interview about Deep Mountain which was recently translated into English by Verso Books.

Taleen Babayan: You interview so many amazing and influential people in this book, including Arto Tuncboyaciyan, Silva Kaputikian, Patrick Devejian, Vartkes Yeghiayan, and they each have their own way of looking at not only the Turks but at themselves as Armenians. Was there a common thread among your subjects and the people you spoke with?

Ece Temelkuran: Although they expressed it in completely different ways, the main question that was eating them was this: Why don't Turks feel anything? Even Ara Toranian (editor of Nouvelles d'Arm?nie Magazine and past ASALA sympathizer). He wants to tell his story to the Turks, not to the French or Americans. But the one who he wants to tell the story to doesn't want to listen.

I think, although the Armenian community is extremely mature, they have this wounded child in them, whatever their ages are. That is the common thread I guess.

You interviewed French politician Patrick Devedjian, who was the architect of the genocide legislation in France, which had an amendment that would criminalize the denial of the Armenian Genocide in France. He felt Turkey would change under heavy pressure. And you felt the opposite: that this kind of legislation would cause Turkey to retreat and make it more difficult for open dialogue to ensue.

Do you still hold this viewpoint? Don't you think the recognition of the genocide by the world will cause Turkey to finally face its past since the rest of the world is doing so?

There are two levels of this issue.

One of them is the diplomatic side. Of course Turkey will change under diplomatic pressure, and it started changing as we all witnessed recently. We have seen Turkish and Armenian leaders shaking hands and two foreign affairs ministers signing protocols. Behind them were the world leaders as if these politicians were the children and the leaders of the world were the parents who are guarding them.

But this is not real. It's something artificial. When people don't feel it within them, it doesn't matter if diplomatic progress has been made. If the peoples on both sides aren't genuinely integrated to the process the diplomatic progress can be easily sabotaged.

After Hrant [Dink was assassinated], Armenians became an easier topic to talk about. His death became a human shield on the issue. People even created the slogan ?We are all Armenians' in his funeral. I always feel as if Hrant was sacrificed. After his death, it became relatively easier for people to talk about Armenian issues and openly say they have Armenian friends.

It's tragically ironic. Even the diplomatic progress would be completely impossible without what people felt after Hrant's death. Bottom line is, Hrant has done more than any world leader or any legislation could do.

How has the reception been for Deep Mountain amongst both Armenians and Turks? Was it written for an Armenian audience?

It was received very well in Turkey, to my surprise. The book sold over 60,000 copies and [that is a high number] for a country like Turkey, which clings to amnesia. I think it was because of the attitude of the book. In most cases, intellectuals are trying to push and slap this issue into people's faces. They expect people to feel guilty rather than remember. I tried to make them remember first and then leave it to them to figure out what they feel about it.

Most of the people felt, not necessarily guilty, but touched for the first time, and without even questioning what really happened in 1915 they were eager to understand the humane side of the history. They admitted that they have feelings about Armenians which Turks are taught not to have. I guess, for the first time, Turkish people were trying to put themselves in the place of Armenians.

I wanted the audience, especially the Turkish audience to put themselves in this character, who in the beginning doesn't feel a thing about Armenians, who rejects to feel anything and who by time understand the reason of her numbness. I suppose that numbness is what intimidates Armenians most, and they have a point. They say, “We feel so much about this ancient conflict and you feel nothing. How come you feel nothing?”
That's the biggest question of the Armenians.

That is why I wrote the book for both audiences, Armenians and Turks, just to create a new path of communication. Because there are Turkish people who feel for Armenians and there are Armenians who are not just furious.

Have there been any consequences for you or your career since you wrote and published a book that discusses the Armenian-Turkish relationship and the Armenian Genocide?

The positive reaction was more of a whispering, not out loud. Recently, a middle aged woman stopped me on my way and said that she thought I was betraying my country and countrymen.

I think that's an exception because most of the people thought that this book tells the true stories of people. Deep Mountain was never after proving some historic reality, or never took a side in the genocide discussion. It was more about a human story.

The book is defending that we should share our stories before labeling the story and if labeling the story is an obstacle let's leave it aside and talk our minds. I got some threats of course but that is… [but] you know, [that is] kind of daily life in Turkey.

When was the first time you heard about the Armenian Genocide?

And if you don't want to really get involved in the subject, you don't have to because you can't find information about Armenians. It's not easy to blame Turkish people about not knowing about 1915 because there are no sources that are out there and legal in Turkey.

Hrant was killed and that changed everything, for not only me but his family, friends and the Turkish people. For the first time they saw that this Armenian was an amazing man, so it changed all of our questions. But on the other hand, after his death, after I finished the book, my journey continued. He was killed because he was Armenian, that's for sure.

But there's something else. He was a friend of mine. And all of a sudden you see that a normal friend of yours is killed and has turned into a symbol and someone you can't define. So it changed my life in that respect as well. It was the first time I saw a friend dying. I saw him when he was lying on the ground in the street. So it changed a lot.

But then it became like keeping a promise because he wanted me to write this book and he wanted the Diaspora to read it. It was a promise to him.

In the postscript of Deep Mountain you apologize to the Armenians and invite them to have a glass of raki with you and to visit Turkey. Don't you think this is a bit idealistic?

That's what Hrant was after, and I know there are people who take it seriously which I would love to see. And there are homes of Armenians in Istanbul so they should really come. Even if it sounds idealistic or na?ve, I feel that it's important for Diaspora Armenians to hear this from Turkish people. What's done is done but the current psychological problem is feeling homeless, in a way, even for those wealthy Armenians with big estates in the U.S.

In your opinion, what does the future hold for Armenians and Turks? You said in your book that neither the Turks nor the Armenians are homogenous. With this many different viewpoints, will there ever be a resolution? Will there ever be reconciliation?

I think there will be. There is a crack in the wall of numbness. We cannot go back. There is a new wave now in Turkey among Turkish people. They are talking about finding their Armenian roots. It's everywhere and people are happy about this. It is interesting to observe this new, deep wave. Since Hrant died three years ago, people are searching for their Armenian roots.

You encountered many Armenians while you were writing this book. How did the process change your ideas of Armenians?

ET: People in Turkey are brought up with the idea that there is a giant monster called ?Diaspora' and then there are ?our Armenians'. It is mostly believed that ?the monster' is doing the evil (bringing up the recognition issue, etc.) and that “our” Armenians are actually “well behaved” enough to forget about what happened in 1915.

After speaking to the Armenians abroad I came to know and actually wrote about how deceiving this perception was. Most of it all, seeing that all those “furious Diaspora Armenians” were actually the ones were most easy to talk to made me think about the “heart of the Armenians.”

I thought about this especially when I talked to Ara Toranian in Paris. Over all, I never knew that the Armenians, even those whose fathers were born in the US missed Anatolia with such passion. I think the Turkish audience was most touched by this reality.

Speaking to the readers in Turkey I can say that Deep Mountain changed the image of Diaspora in Turkey in every sense.

While conducting your interviews and research for Deep Mountain, you spent time in France, U.S. and Armenia and got to know the Armenian communities there. Do you now see a difference between Armenians in Armenia and Diaspora-Armenians in terms of how they perceive Turks?

As you go West, the subjects I met became less emotional I can say. Such generalizations never represent the whole truth though. Yet again I can say that in Europe the issues of memory, 1915 and dialogue are more intellectualized.

As for Armenia, I observed an eagerness to “forgive” Turks, even though there has been no apology. I even heard a couple of Armenians in Yerevan saying this: “It wasn't the Turks, it was Jews who killed the Armenians.”

As someone who knew and respected Hrant Dink, what do you think people should do to honor his memory?

Rather than proving that they were killed, Hrant wanted to prove that the Armenians actually lived in Turkey. So I think putting this reality forward might be the first thing to do. Besides, he was saying that, “We should learn to talk about today, and then we can find a way to talk about the past.”

That is why I tried to describe the Armenians and Turks of today, rather than going to the archives. This is an attempt which requires a collective effort. I hope Deep Mountain can help us start a journey together that Hrant long dreamed of and sacrificed himself for.

How to keep your kids Armenian