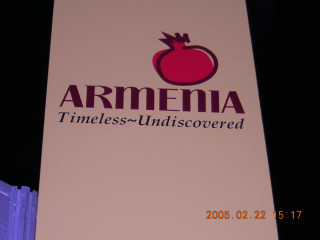 Armen Matosyan, Senior Marketing Advisor at DAI-ASME said that “it is very significant that is occupying a separate stand in this international exhibition. Our Agency has encouraged Armenian companies to take part in this exhibition. We have sent informative bulletin long before the due date. We have also created incentives for participation, by covering 50% of the expenses of the Armenian stand. Thus the average cost for exhibition space for each company has been about 2000 dollars instead of 4000 dollars”.

Talking about future participation he said that his Agency might not be sponsoring next Gulfood exhibition (due to take place from 19-22 February 2006). “We are effectively asking Armenian companies to get used to the idea of bearing the cost of the marketing of their own products, especially that now they have already achieved a degree of penetration into the market”.

Lyudmila Hovahnnisyan of “Vordi Armen LLC” expressed initial satisfaction about the UAE market. “We have received many inquiries. I am collecting business cards in a separate folder and will answer to all requests once I am back in . We produce many types of cheeses. Our packaging system has been developed now and it is up to the international standards”, she insists.

From what we noticed the packaging of Armenian products have really improved. Eight out of the ten exhibiting companies had attractive labels. Only two (Tamar Tatik and Gamma) need to revise their packaging and labeling methods.

Armen Hakobyan of “SIS Natural Cannery Ltd” said that his company intends to participate next year even if it has to pay all the participating expenses. “It is extremely important to meet our clients in and discuss ways of improving our exporting capabilities”. He had hired this year an Armenian translator and coordinator from , to assist him in dealing with the flow of customers.

Edward Dilanyan, President of “Vitamax-E LLC” said that his dietary product Narine is truly unique and is the result of laboratory work in . Referring to the Exhibition he said “ is a place where you can meet clients from many countries. This is why we concentrate on this Exhibition”.

The DAI-ASME stand was hosting tourist material provided by the Armenian Tourism Development Agency. People were so much interested to know this new destination that the printed material on expired on the very first day of the exhibition. Newcomers were still asking for material and were even satisfied with the remaining Italian and German language brochures.

“Very few Armenians from the UAE made the effort to come and see our products” concluded Armen Matosyan his interview with Azad-Hye.com. “We are sad that Armenians did not have the curiosity to see our stand and to encourage our producers”.

Philip Smith, Senior Area Manager of the influential “Khaleej Times” English language daily of visited the Armenian stand and received the attention of the organizers. They invited him to visit to see the beauty of the country and to confirm the purity of the Armenian products. From his side he expressed belief that will benefit from its proximity to the UAE market and will improve its exporting record.

Upper-Left picture: The pomegranate, symbol of the Armenian stand at the Gulfood 2005. See the rest of photos (total 17) in the photo gallery on your right side.