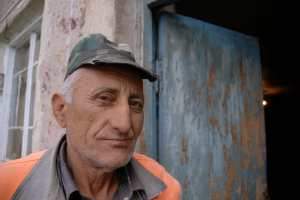 ASHNAK, ARMENIA // Nearly a century after her family fled what was then Western Armenia, Haykanush Manukyan does not have any good words to say about Turks.

The 75-year-old great-grandmother, who lives in this village 70km from the Armenian capital, Yerevan, describes them as ?traitors?.

?I think only bad things about Turks,? she said through an interpreter. ?They killed us, they committed genocide.?

Her comments indicate how charged emotions are in Armenia regarding Turkey, even though the government has held talks with its neighbour about establishing diplomatic relations and opening their shared border.

Armenia, however, said it would establish diplomatic relations with Turkey even without the latter recognising the Ottoman-era massacre as ?genocide?.

Mrs Manukyan, a widow, said her own grandparents died amid the killing of Armenians under the Ottomans during the First World War.

?Only my father and uncle [escaped],? she said. ?My father was only three years old and he managed to end up here. My uncle ended up in Syria or Lebanon.?

Many of the other residents of Ashnak are also descended from residents of Sason or Sasun as it used to be known, a district of what was then Western Armenia. This area, which is now in eastern Turkey, south-west of Lake Van, contained dozens of Armenian villages.

Every year on April 24, the date on which Armenians remember what they describe as a genocide, the people of Ashnak light a fire on the top of a hill near the village.

In another indicator of the attachment villagers have to what they call their homeland, upstairs in the village church is a museum to Gevorg Chaush, a celebrated former Sason resident who led the resistance to the Ottoman authorities and was killed in 1907. There are countless paintings of the mustachioed fighter, in some of which he is posing with his rifle.

Among the many in the village who admire the resistance of Chaush is Ghazaryan Husik, 51, a gardener. He said his grandparents ?escaped the massacres? and eventually ended up in Ashnak.

?We speak a lot about it,? he said, referring to the genocide, which has been recognised as such by more than a dozen countries, although not by Turkey, much to the disquiet of Armenians.

?Every day we speak about it. Armenians suffered like Jews, but our case is more difficult because we lost our historical homeland.? Another villager keen to visit the former Western Armenia is Aharon Ghukasyan, 32, also the descendant of a former Sason resident. His feelings about the possible opening of the border are mixed, though.

?Armenia maybe wants this border reopened because of economic conditions, only for this reason.?

?Also, many people want the border to open so they can see the country of their grandparents.?

If Turkey and Armenia do strike a deal, Mr Ghukasyan said he would definitely ?go to see the country of my grandparents. But I don?t know how I would feel if I got there and saw Turks around me.?

In the nearby village of Davtashen, Rafik Sargsyan, 61, said ?it will be good? if the blockade, which dates to 1993, is lifted. ?If they recognise the genocide and we have the opportunity to go and look after our lands, it?s something,? he said, speaking in the front room of his spartan home. ?It will moderate my feelings.?

Living where they are now is harder than it would have been in the former Western Armenia, Mr Sargsyan said, because the land is less fertile than he was told it was there.

?We heard from our grandparents the land was very good there. They missed the land there. They would say: ?we wish we could just drink the water of our country and die?.? The family, like most of those around them, are poor and their houses simple.

While some descendants of those who fled what is now eastern Turkey are keen for the border to open so they can visit the area, others are angrily opposed to any rapprochement with Turkey.

Among them is Mrs Manukyan in Ashnak. She fears the consequences if more Turkish people visit Armenia.

?No question, I don?t want the border to open. Whatever bad things they have will come here.?

Rafik Sargsyan, from the village of Davtashen, would like to see the border opened. Onnik Krikorian for The National