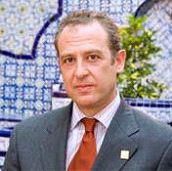 Washington – In an October 9, 2008, interview with Arturo Sarukh?n Casamitjana, Mexico's ambassador to the United States, the Armenian Reporter's Washington Editor Emil Sanamyan and intern Lusine Sarkisyan asked him about his unique family history and his thoughts on Armenia, etc.

How does someone of Armenian descent get to lead one of the most important embassies in Washington, representing Mexico, a country of more than 100 million?

Hard work! I'm a career diplomat. I have been in the Foreign Service for 14 years. This is my second tour duty in Washington. I was here earlier as chief of staff to the ambassador. I arrived as a chief of staff to the ambassador in 1993 and stayed on with the next ambassador, and then [in 1998] I went back to Mexico. How did I arrive to this specific post? Well, I was consul general in New York and I asked for a leave of absence from the Foreign Service, resigned my commission as consul general in New York, and joined [then presidential candidate] Felipe Calder?n as his chief foreign policy advisor and his international spokesperson. I then headed the transition team on foreign policy and became ambassador in 2007.

Can you tell us your family story, particularly the Armenian part?

My grandparents arrived in Mexico in the early 1930s. My grandfather was a Russian-Armenian also named Artur Sarukhanian, but when he arrived in Mexico, he tried to make it easier on the Mexican authorities [and cut the “ian”]. He was an aide to Alexander Kerensky [head of Russia?s “Provisional government” in 1917]. After Kerensky was overthrown by the Bolsheviks, he left Russia and came to Venice, where he was trained at the Armenian seminary. My grandmother fled the Genocide in 1915. Most of her family was killed in the Genocide, but she was able to escape to Thessaloniki in northern Greece. From there she went to Venice and my grandparents met and were married in Venice.?At the time, Benito Mussolini came to power [in Italy and was establishing his Fascist government] my grandfather said: “This smells bad.” So, they went to Mexico with the idea of coming to Canada. My grandfather spoke 9 languages, English among them, but he had read a lot about Mexico, so he decided to stop in Mexico on their way to Canada. They never left. My grandparents fell in love with Mexico and they stayed in Mexico. That's how I was born in Mexico.

What is the Armenian presence in Mexico?

It's a very small community. A lot of those who arrived as a result of the Genocide actually did end up doing what my grandfather wanted to do, which was move north to the U.S. or Canada. So, a lot of the Mexican-Armenian families after World War II – most of them ended up in Fresno, California . The Armenian community in Mexico is very small.

Although at a distance from Armenia, I imagine you over time have followed the events in Armenia. What is the most striking thing about Armenia for you?

I was [in Armenia] once with my father when I was a teenager, when it was still a part of the Soviet Union. I have not been back to the independent Armenia. It is certainly what I look forward to because it is important to, number one, understand one's roots. But also, [even though] I am a Mexican diplomat and I represent my country in the most important country for Mexico, which is the United States, there is such a thing as a global citizenry. These pasts and origins have the ability to connect and create networks regardless of passport, nationality, ethnicity, and color. [Such networks] are the only response to some of the challenges that many countries like ours face. Challenges like security in the post-September 11 world, environmental degradation, social-economic development that is also just and fair. Armenia and Mexico have lived next to big, powerful countries. Armenia is near Russia and Mexico near the U.S. We've both had traumatic historical experiences with our neighbors: Armenia with Turkey and to certain extent Russia, Mexico with the U.S. after the war of 1847. Therefore, I think there is a lot of common ground that can be built on by engaging. There are two things that surprise me. One is the resiliency of the Armenian people and culture. I see that at home with my father and mother. (She is also a refugee, but from another side of the Mediterranean. She is a republican refugee from the 1930s Civil War in Spain.) The other thing that surprises me is how the Armenian diaspora has not had the ability to forcefully portray and make its case as the Jewish-American community has. How the resources and the capital, manpower, and even the celebrities – even though some of them do it very actively – has not been translated to a full-fledged recognition, explanation, coming to terms with what happened in that part of the world.

Has Mexico been confronted with the Armenian Genocide issue either in the context of international organizations or directly, and how does it perceive the issue of genocide?

I think Mexico is one of the countries that have supported resolutions condemning genocide. For reasons that have to do with geographical distance and the fact that there is a small Armenian community in Mexico, it is not an issue that is on top of Mexican diplomatic agenda.

But is the Armenian Genocide debated in Mexico?

No, not really. Some people know, some people are interested, some people have written about it, but again it's not a top issue. We don't have the size that other countries like Argentina, France, and others have in terms of the Armenian population. It's not something that comes from the grassroots.

For example, earlier this year there was a United Nations General Assembly vote on the Karabakh conflict, an issue of key concern to Armenia. And Azerbaijan relied on support from Islamic countries, most of which basically joined in support of Azerbaijan's position, while the vast majority of countries, including Latin American ones, abstained or did not vote.

Is there a similar solidarity among the Latin American countries in the UN or elsewhere?

There is a Latin American group and they usually vote en bloc, but not always, depending on the issue. The closer the issue is to the core diplomatic priorities in the region it becomes more difficult to vote en bloc. The farther away you get, whether it is an issue of security or development, it will change, but there isn't a paradigm that forces the group to vote in block. Many times on many issues in nations decide to go their own way.