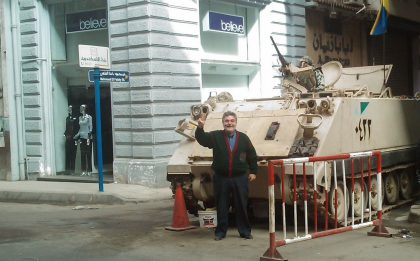 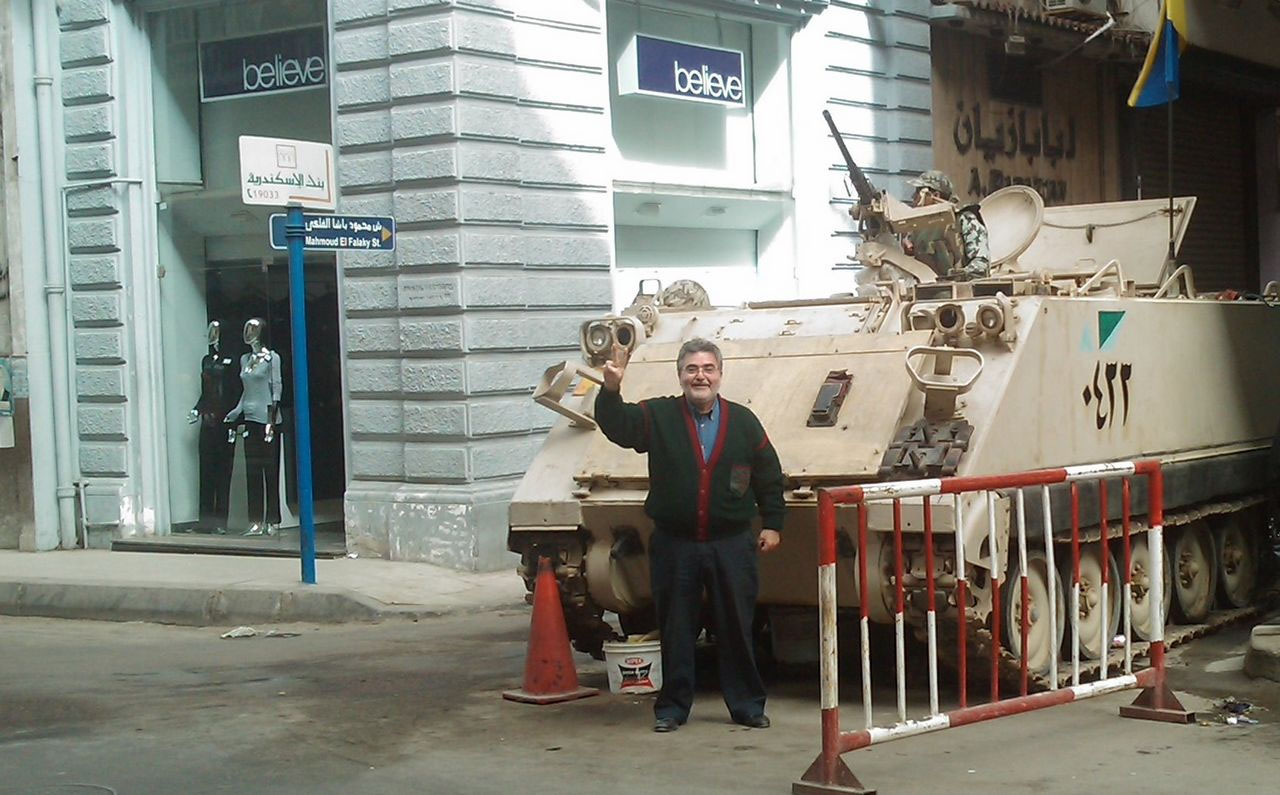 Emerging from the recent revolt that ended Hosni Mubarak?s 30-year dictatorship is a jolted Egypt at a crossroads. Amid uncertain times and powerful currents, the small Armenian community of Egypt stands to weather the winds of change. Mostly willing to adapt to whatever rolls its way, a mix of cynicism, skepticism and optimism pepper its discourse. The sea of people that overtook the streets chanting ?Down with Mubarak!? voiced concerns afflicting Egyptians from all walks of life, including Armenians. ?The grievances that gave way to this revolution cannot be ignored or denied. Corruption, poverty, an economy that benefits only a handful, limited freedoms, inequality, lawlessness, and the need for basic human rights?these are problems that directly or indirectly affected the Armenian community,? Dr. Armen Mazloumian, a physician and the head of Cairo?s Hai Tahd (Armenian Cause) Committee, told the Armenian Weekly.

On Jan. 25, in what became known as a ?day of rage,? Egyptians poured onto the streets of Cairo, Alexandria, and elsewhere, demanding an end to the rule of President Mubarak. They called for an end to poverty, unemployment, oppression, and corruption. They wanted dignity and social justice. The seeds of the protest were planted on Facebook and Twitter, spreading like wildfire online and offline.

?By midnight, the Muslim Brotherhood and their supporters joined in, and that was the provoking factor,? Joe Papazian, an Armenian jeweler from Alexandria who holds a degree in economics, told the Weekly. ?That?s when security forces started using gas and water to disperse the crowd. For the next three days, the crowd got bigger and bigger, supporters and anyone who was unhappy with anything joined in, and the violence [from Mubarak sympathizers] escalated dramatically.?

?The wood was ready and dry. They simply threw a match on it,? Der Krikor Mouradian, the Armenian Apostolic Church?s Vicar to Alexandria, said in an interview with the Weekly.

Even a few years back, the time was ripe?not just in Egypt, but the entire Arab world, he explained. All that was needed was a spark from the West, the U.S. The signal came, and the Arab world caught fire. ?The leaders in Tunis, Yemen, and Syria, Mubarak and [Muammar] Gaddafi?they were stale and rotten, they didn?t fit the equation anymore. And the people, they didn?t want despots,? he said.

The harsh realities under Mubarak?s regime were reason for many Egyptian-Armenians to chime in, mostly in the form of opinions displayed on Facebook pages by Armenian youth. However, Mazloumian notes that if 10-15 million people took part in the demonstrations, 70 million remained silent. After all, fear and uncertainty were present in everyone?s minds, both Egyptian and Armenian.

Even so, Armenians, like many fellow Egyptians, considered it their duty to guard the streets, residences, institutions, stores, and neighborhoods against looters and criminals in the absence of law enforcement bodies.

When thousands of prisoners were let loose from Alexandria?s prison, citizens found themselves facing hordes of bandits. Hrant Vartzbedian, a lawyer, who serves as secretary of the Armenian General Benevolent Union (AGBU) Alexandria Chapter, painted a vivid picture of his community?s defense efforts in face of prison outbreaks.

?I was in a group of 70 men and some boys with only eight shotguns and pistols, manning a stretch of two parallel streets. Like other neighborhoods, we had to barricade our street, use lookouts such as the mosque tower, passwords, and nametags to secure our streets,? said Vartzbedian.

On Jan. 29, a group of around 500 armed looters approached Vartzbedian?s neighborhood. Overwhelmed, the locals dispersed and hid in their homes. Luckily, they were saved by three military armored vehicles that had come to protect the empty residence of the admiral of the navy, who lived in the area. According to Vartzbedian, the governor?s mansion and the police commissioner?s villas were looted and set on fire that same night.

In response to the escalating violence, public institutions began locking their doors to prevent looting and crime. Armenian Schools closed their gates per order of the government (classes will resume on March 13). Alexandria?s Armenian Church, however, never turned a worshipper away amid the turmoil. The government has assigned a handful of soldiers to protect the church. Thus far, there have been no incidents, and no Armenians have been reported hurt.

Despite the appointment of a new prime minister, Essam Sharaf, on March 3, and the formation of a new cabinet four days later, protests continue. Uncertain of what the future may hold, some fear that anarchy will continue spreading.

Now the protesters are in control of the situation, explained Papazian. They reject anyone with ties to Mubarak?s regime. However, without clear leaders representing the people?only coordinators and organizers?dialogue with the provisional government is difficult. Therefore, every important decision that is made by the new government is leaked the night before to test public opinion. ?There are no polls, just demonstrations in Tahrir Square: for or against. Is it a revolution? Is it a coup d??tat? No, it is Tahriration!? he said.

If anarchy prevails, Papazian believes the Brotherhood will emerge victorious. ?Maybe or probably [anarchy] is what the coalition of progressives, liberals, socialists, Marxists, and the Muslim Brotherhood long for, but take a moment and think: Which of these groups is the more organized, powerful, politically experienced, resourceful, and active since the ?40s?? he asked.

While Mazloumian doubts the Brotherhood will assume power in the near future, the real challenge, he said, is carrying the revolution through to the end?and the next few months are a critical period. There is a fine line between revolution and chaos, and caution is required to move forward, especially because a counter-revolution exists. ?It is the role of the wise to use sound judgment and to deal with the day?s on-the-ground issues and difficulties,? he said. ?Otherwise, it is possible to lose all that has been gained.?

Founded in 1928 by the Islamic scholar Hassan al-Banna, the Muslim Brotherhood has a strong footing in most Arab states. A group that has renounced violence, the Brotherhood aims to lead society through the Koran, following the path of Prophet Muhammad.

Christians in Egypt, predominantly Coptic, make up roughly 10 percent of the population. And while the Copts have been the target of hate crimes, including church bombings, Fr. Mouradian believes that Egypt?s Muslims and Christians have strong relations, and that tensions may have been instigated by those looking to maintain control over the population. ?There?s speculation that Mubarak?s men were behind religious tensions, like the Jan. 1 church bombing, to keep the people in fear,? he said.

Whether or not Mubarak was indeed fueling religious strife is up for debate. According to Al Jazeera, around 1,000 people, mainly Christians, protested in Cairo on March 8 against the burning of a church in Helwan. The demonstration turned violent and 11 people?six Copts and five Muslims?were killed.

Although acts of violence do occur against Egypt?s Christian minorities, there are also acts of love and altruism. On Jan. 6, days after the Saints Church bombing in Alexandria left 21 people dead, thousands of Egyptian Muslims turned up at Coptic churches around the country to offer their bodies as human shields during Coptic Christmas Eve mass services, under the slogan, ?We either live together, or we die together,? reported the Egyptian newspaper al-Ahram.

Fr. Mouradian says Christians acted in a similarly altruistic manner in Tahrir Square, where they formed a human wall around praying Muslims, for protection.

Regardless of who holds power, Fr. Mouradian believes Egyptian Armenians will remain safe. An Alexandria resident for 16 years, he says he has never been made to feel different. ?Now, our Muslim church-guards have vowed to protect our church. They say they?ll skin anyone who tries to harm us. The Armenians are safe,? he said.

What?s next for Egypt and its Armenians?

In recent years, the Egyptian Armenian community has been proactive in rekindling the once-vibrant relations it had with Egyptian entities, both Christian and Muslim, said Mazloumian, who is also a member of the Armenian Cairo Diocesan Council.

Armenians have played an active role in Egypt?s history. From the 11th-12th centuries, Armenians held prominent positions in government, including the role of vizier. More recently, in the 19th-20th centuries, Armenians once again reached top offices. Egypt?s first prime minister (1878) was an Armenian by the name of Nubar Pasha, and filled that post three times during his career. Later, Egypt?s wealthy Armenian community helped organize and support the post-genocide communities in the area.

After the Egyptian Revolution of 1952 led by Muhammad Neguib (first President of Egypt) and Gamal Abdel Nasser (second President of Egypt), large numbers of Armenians began to emigrate. The community of 50,000 shrunk significantly. Today, its numbers are estimated to be between 6,000 and 8,000. Regardless, Egypt?s Armenians remain a tight-knit community. According to Mazloumian, they have stayed away from the country?s political discourse, especially after 1952, when the country?s overall mentality and ideological discourse changed. They are not indifferent, just disengaged, he said, instead focusing on cultivating the image of ?exemplary citizens.?

?It is high time for members of the Egyptian-Armenian community to actively participate in the upcoming elections, as well as all political, cultural, and various other activities, and to reestablish the important role the community has played in the past,? said Mazloumian.

Firm in his faith and determined to raise the new generations to retain the Armenian identity, Papazian believes the community will weather any change. ?We have survived Nasser, and we will survive any kind of regime as long as our children and grandchildren remain Armenian, speak Armenian, and follow Christ wherever He takes them.?

For a country that?s been under the thumb of a dictator, democracy seems more like a far-fetched daydream rather than a real possibility. Like Papazian, Fr. Mouradian is skeptical of any radical changes, outright rejecting the notion of a democratic Egypt. ?No, what democracy!? he said, sizing up his cigarette. ?That?s not possible. With the lack of awareness of individual rights, how can you create a democracy??

Fr. Mouradian, who lived in Armenia before moving to Alexandria as Vicar, also finds similarities between the grievances of Egypt and those of Armenia. ?Armenia is in a similar boat. Five people eat, 5,000 starve! But in Armenia, if such a [revolution] happens, catastrophe will follow,? he said. ?We?re a nation surrounded by enemies who won?t miss an opportunity like that.?

Mazloumian, in contrast, not only thinks that democracy is attainable, but that Armenians can have a place in the new Egyptian chapter. He has faith in the country?s resources, especially its educated and ?wise? activists, who appear to have the army?s backing. He hopes the army will act as guarantor in achieving the goals of the protesters in the establishment of a civil and democratic state, and that the new Egypt will be founded on laws and respect for human rights.

?I can assure you that Egypt is not the same as it was before Jan. 25. The Egyptian people have shed the feelings of fear and terror. If most of the goals of the revolution are realized, I see a bright and promising future for Egypt,? he said.

?In this mosaic, Egypt?s Armenians must have their place and imprint.?

Photo: ?My personal military vehicle?the protector of our shop and defender of our civil liberties. Hallelujah! Who needs the police when we?ve got tanks!? said Papazian.

Nanore Barsoumian is the assistant editor of the Armenian Weekly. She earned her BA from the University of Massachusetts (Boston), majoring in Political Science and English. Nanore is a passionate anti-war activist and deeply committed to making an impact on issues of contemporary relevance. She speaks several languages, among them Armenian, Arabic, and French. She has been a volunteer and a group leader with the Land and Culture Organization, working with the refugee community in Shatvan, Armenia, renovating the local school. She can be reached at [email protected].