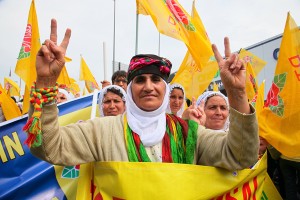 The inheritance of my generation of Armenians is the legacy of our parents and grandparents who survived the genocide, especially the atrocities committed by the Kurds. Even after almost a century, talking to the post-genocide Armenians about the Kurds generates anger, hatred, belittlement, and at best indifference. However, today?s realities mandate a cool, close look at these people who share land with us in southeastern Turkey, which we call Western Armenia and they call Northern Kurdistan. So are they our friends or foes, or both?

The stories passed on to us speak of the criminal, at least hostile, acts perpetrated against Armenians throughout the centuries, especially in the late 19th century by Kurdish tribes leading to the Great Genocide of 1915.

Who are these people who have historically influenced our way of life, threatened our existence, and continue to shape our future?

Ethnic jokes and anecdotes portray the Kurd as an ignorant group of nomads, who are Muslims (just barely so, according to the Turks, who consider the Kurds Muslim only when compared to the giavour (the infidel): Giavoura bakarak Kurd Musluman).

Historic accounts document their profile as tribes who, for the last five centuries, have survived in Anatolia through extortion, robbery, individual killings, mass killings, rape, kidnapping, and in general, by collaborating with the Ottoman authorities to oppress the Armenian nation and the other Christian minorities.

So, who are the Kurds? What is their genealogical origin? Where did they come from?

All that really matters not! What matters is that they have lived with us for 4,000 years and have sometimes been our friends, often our foes, not to say enemies. Our histories have intermingled; we have allied ourselves with the Ottomans against them, they have done the same against us, and at times we have joined forces with them against the Ottoman government. An example: the 1845 armed uprising of Prince Badrkhan, in a coalition with the Armenians, against the Sultan. Prince Badrkhan believed that ?The Armenians and the Kurds are Arians, belonging to the same race. One tribe accepted Islam and the other remained Christian.? He even allowed intermarriage, though it is doubtful that any Armenian man married a Kurdish girl.

I met his great grandson Saif Badrkhan, who lives in California. He?s a highly educated decent human being who even gave a brief speech in one of the April 24 gatherings in LA condemning the genocide. He arranged for me to deliver speeches in Kurdish American conferences in California and Maryland. I did! The meetings were crowded by people, whose appearance and existence alone changed my view of the Kurds. Perhaps it is not an exaggeration to say that whomever I met had a Ph.D. or master?s degree in some scientific or business field. Polite mannerisms reflected civility during the official speeches, and during dinners and social hours. Ladies, graceful in their charm and traditional Kurdish gowns, mingled with men and danced shoulder to shoulder.

I was given a seat in the front row. There was an empty chair to my left; I thought it might have been planted there deliberately, because Kurds, all from Turkey, came to shake my hand, and sit on that chair to share thoughts and ?secrets? with the ?representative of the Armenian people,? which I was not, nor claimed to be. A few of them posed a rhetorical question: ?Why are the Kurds Muslims? What have we gained by being Muslims?? At least a dozen or so told me?on the promise of anonymity?that their grandmother is Armenian. I was not shocked. A few years later I heard the Kurdish explanation of kidnapping our girls, which I will discuss later.

The theme of these meetings was inarguably political and inarguably nationalistic and designed to advance the cause of a ?United, Free Kurdistan.? It was an eye opener! For, the issue was not limited to Iraqi Kurdistan, the liberation of the Kurds from the atrocities of Saddam Hussein, but to Pan Kurdism and the establishment of a united, free, and sovereign Kurdistan expanding from the Araratian planes in present-day Turkey to Kirkuk and Mandali, deep into Iraq. Needless to say, it includes the six Armenian vilayets, the jewel of which was Van.

I said my word, loud and clear, from the podium, the gist of which was: Yes, we have the same cause. Yes, we have a common enemy. Yes, there should be an alliance between us. But each group has its own interests and rights, for which they must struggle. There should be no dispute between our two nations. We are partners in destiny. Our rights were spelled out, in detail, in the provisions of the Sevres Treaty, which was then refined and mapped by U.S. President Woodrow Wilson. It is to our advantage, and to the detriment of Turkey, to stick to this map and the provisions in the Sevres Treaty.

I got standing ovations all three times, but not necessarily as an endorsement of my expressed ideas. They were, I believe, happy for my having exposed Turkey for what it is: an occupier, an oppressor of other nations, and a violator of human rights.

In one of the meetings, I met Nijyar H. Shemdin (Agha) the son of Hajji Shemdin Agha of Zakho, Iraq. My uncle, Dr. Krikor Astarjian, was one of Shemdin Agha?s close friends and his family?s physician. Through the Agha, and other Aghas whom he canvassed, he was instrumental in tipping the League of Nation?s plebiscite held in the early 1920?s in favor of Iraq. In this plebiscite, the Kurds of Mosul voted not to join Kemal Ataturk?s Turkey, thus joining the newly formed Kingdom of Iraq. We both were happy to find each other and recall the memories of yesteryear.

Events guided me to participate in the festivities of the first anniversary of the incorporation of the Kurdish Parliament in Exile, which was incorporated in the Hague, and which established itself physically in Brussels. Ten European countries had recognized it and/or lent their support to this democratic institution. The parliament was established by Turkey?s Kurdish exiled parliamentarians. They had fled Turkey when other Turkish ?deputan? were stripped of their parliamentary immunity and arrested?like Leyla Zana?for supporting the ?Kurdish Cause.?

The organizers had elected Yasar (Yashar) Kaya as president of the parliament. I had met him in one of the Kurdish meetings in California, where he also had delivered a speech calling for Kurdish unity. He, together with Zubeyir Aydar, the chair of the Executive Committee (originally representing Siirt in the Turkish Parliament) came to welcome the representative of the Tashnag Party (which I was not). They took me to dinner in an Italian restaurant. I let them initiate the conversation. They apologized for Kurdish tribes? criminal acts against the Armenians. They said, ?These killers were of certain tribes who are doing to us what they did to you: They are killing us, raping our women in front of assembled villagers, they are burning our villages and hamlets, and they are deporting the civilians into internal exile. The difference is that they did not send them to Der Zor. You had the Hamidiya Alaylari, and we have these criminals, the Korujus. They are on Turkish government?s payroll.?

They further developed the conversation to talk about Kurdish kidnapping of our children. They said, ?We don?t dispute that, but look at it from our view: We knew that those kids would face a certain death in the desert of Der Zor, so we saved their lives. And we always told them they are Armenians.? They did not say that they converted them to Islam.

They went into the litany of the genocide, expressing profound sympathy to the survivors and their offspring. I listened and listened to this sincere mea culpa, until it became repetitious, at which time I told them what I told the parliament in a televised speech the following day. The gist of my speech was simple: I am not here to demand sympathy or demand apology from the Kurds. I am here to affirm the Armenian nation?s right to some of the land you are living on, and to our adherence to the provisions of the Sevres Treaty. Our relationship with the Kurdish nation is not based on ideology, but on land rights and demands in Western Armenia. Both the Kurdish and Belgian televisions televised the proceedings.

Our relationship with the Kurds is a complex one: (1) We are allies by necessity: The enemy of my enemy is my friend. (2) They look up to us, yet we look down upon them. And we are wrong. The Kurds have advanced in every imaginable field beyond anyone?s imagination, certainly beyond mine. (3) Whether we like it or not, they are our neighbors. We better understand them. (4) Other than Western Armenia, there is, for them, the issue of ?Red Kurdistan,? that is, Lachin, Kelbajar, and Fizuli. For us, the case is closed.

So, are the Kurds our friends or foe? Probably both. A smart approach to this seemingly impossible situation will make them, in my opinion, our friends much more than our foes.

(One caveat: Though I kept our leadership fully informed, I had no endorsement nor any kind of support from them. In this endeavor, I was not representing anyone but myself. Others may have had a different impression.)

Newer PostPrime Minister’s 1919 letter describes Armenia as destitute, yet full of hope
Older PostList of events in the Armenian Community in 2009