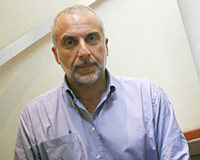 “There has been talk that the Turkish government should do something about the border with Armenia. Some say Armenians should do something before Turkey does something. There are people in this country dissenting from the official version of what happened in 1915.

Those people would have much more credibility than any of the official people that we send around. Have the historians work on the issue and have the dissenters on the historical committee,? ?zel said.

Recently, the US-based Anti-Defamation League (ADL) reversed its long-time policy concerning the killings of Anatolian Armenians in the early 20th century and said the killings of Armenians by Ottoman Turks ?were indeed tantamount to genocide.?

Armenians claim up to 1.5 million of their kinsmen died in a genocide campaign by Ottoman Turks around the time of World War I, but Ankara rejects the label, saying both Armenians and Turks died in civil strife when the Armenians took up arms for independence in eastern Anatolia, siding with Russian troops that were invading the crumbling Ottoman Empire.

And there is a non-binding ?Armenian genocide resolution? pending at the US Congress, likely to pass next year. ?zel said there might be a crisis over the Armenian issue with the US.

For Monday Talk, ?zel told us the circumstances that prompted the ADL?s stance, what the Turkish government can do at this point and how Turkey?s relations with the US have been affected.

How should we put the ADL?s decision into perspective?

First we have to distinguish the position that the ADL now wishes to take vis-?-vis whether or not what happened in 1915 should be considered genocide. And second, whether or not the ADL should support a genocide resolution in the US Congress. In terms of Turkey?s political demands of the Jewish agencies? not supporting the resolution in the US Congress, their position remains the same, but obviously the fact that they are changing their position in terms of how to judge the events of 1915 undermines that political position, at least vis-?-vis some Congress people who may be susceptible to their pressures.

Do we need to talk about the internal dynamics of the organization?

Whether or not this is purely an internal affair or it is to be understood in a context, these two are linked, but I think the immediate crisis that we?ve seen was a function of an internal ADL development. When we look at the chronology of events, what we see is the New England chapter elects a new president, Andrew Tarsy. He decides to call what happened in 1915 genocide, and he is summarily dismissed from his position. There is an upheaval within ADL, so Abraham Foxman says, yes indeed, we consider these brutalities and violence as genocide; we?ve changed our position in terms of how we?re going to be naming what happened.

Foxman had also an announcement after that. Was it a step back?

The second announcement by the ADL was not a step back. However, one has to take into consideration ? [that] the Jews are the most liberal community in the American political system; they take the lead in every humanitarian cause. And when even the entire country was in favor of a war against Iraq, most Jews had been against it as a community, in spite of the fact that many of the neoconservatives themselves were of Jewish origin. So you could not really as Turkey go on indefinitely expecting from such a liberally minded, sensitive constituency to go against its own better judgment in an age when the term genocide has been a bit depreciated, has been ?desanctified,? if you will, not to really go the extra mile and say what happened really is genocide.

Did some of Turkey?s foreign policy steps, like becoming friendly with Syria and Iran, have an effect on the ADL?s decision?

There are circumstances that make it easier for an internal dynamic within the organization to make it possible for the organization itself to change course. And that is of course the recent events during the term of the Justice and Development Party (AK Party): the invitation of Hamas, Turkey?s reluctance to accept it as other Western countries do as a terrorist organization, cozy relations with Syria, and far more importantly very cozy relations with Iran, which Israel sees as a mortal enemy — and obviously many American Jews share that perception of the Israelis. The fact that Turkey has not been very vocal in protesting the holocaust denying conference in Iran, and Turkey has not been against the nonsensical remarks of [Iranian President Mahmoud] Ahmadinejad who questioned the holocaust and called for wiping Israel off the world map, these are strong words, as far as the Israelis and the Jewish community in America were concerned, Turkey?s reaction was not at a desired level.

The American Jewish Committee took a political stand too when its head wrote, ?Picture a day when a muscle-flexing Iran or Saudi Arabia seeks to make denial of the Holocaust a condition of doing business with other countries.?

What in my view is far more politically oriented was an editorial written in The Jerusalem Post by David Harris, national executive director for the American Jewish Committee, a much more hard-core, politically engaged organization in Jewish affairs, probably more attuned to Israeli sentiment. I cannot suggest that Israel has asked these organizations to do what they?ve done. It was [Israeli President] Shimon Peres? intervention which led Foxman to equivocate rather than take a step back. But in the context there is enough circumstantial reasoning to suspect that there has been some give and take.

Why did Peres step in?

Because Turkey asked him to step in. Turkey basically threatened that Turkish-Israeli relations would suffer gravely and instead of calling the American ambassador, we called in the Israeli ambassador, and in my judgment we made a mistake there by erasing the distinction between the American-Jewish community and American domestic politics, and Israel. I personally don?t see why Israel would overtly offend Turkey and push those organizations. Also I wouldn?t think that these organizations would act only when Israel told them to do something. I think in that particular case, they?ve acted on their own, fully knowing how Israel would react and the repercussions.

Have the Jewish organizations been really willing to fight Turkey?s fight?

Over the last few years the Jewish organizations have been more reluctant to go out to fight Turkey?s fight. Because let?s admit it, this is a losing fight because of the way we choose to fight this resolution issue. We made many mistakes that weakened our position and made our believability suspect.

What type of mistakes?

At a time when you?re discussing whether genocide took place, and your argument is, no it was reciprocal and the Armenians did the most harm, the head of your historical association comes up with an idea, which is anathema to anyone let alone the Jews, of having lists of people based on their ethnic origin. And the government has not disassociated itself [from this].

What should have been done?

So the Turkish strategy has failed?

Obviously the strategy to stop this momentum, to stop the US Congress from passing a non-binding resolution, has utterly and miserably failed. Let?s just recognize this, a congresswoman elected from California who is the speaker of the house today cannot afford — unless extraordinary circumstances are present — not to bring the resolution to the floor of Congress before the 2008 elections. There are more than 225 co-signatories already. Unjustly perhaps, but this is the battle Turkey has lost.

How could Turkey change the terms of the debate?

What the Armenian diaspora wants is to call it genocide. We don?t have to accept that. Nobody in Turkey will accept that. But we have played along in this name game. It?s not the naming game what is important; the real issue is to get into the bottom of things. You can take what [Yusuf] Hala?oğlu [head of the Turkish Historical Society (TTK)] had said and turn the table around. You can say this is really a multireligious and multiethnic land. We have people who felt compelled to convert to Islam, obviously to save their lives. Use the same fact for a different narrative. By accepting the name game, you basically put the entire population face to face with a major threat. By putting the issue in an ethnic and nationalistic discourse, you made an emotional interpretation of what happened. First, you have to change the air, and then you can discuss things.

How would normalizing relations with Armenia help Turkey?

The only reason I could see why Turkey would not do such a thing is because of Azerbaijan and sensitivities among the Turkish public that 20 percent of Azerbaijan proper, in addition to Nagorno-Karabakh, is under occupation; people are refugees in their own countries and the Armenians are doing nothing about it, the world community is not doing anything — then why open the border. If Turkey were to open the [border] gate with Armenia, it would have much more influence on Armenia than it has today. Secondly, it will be better able to explain its position, because many foreigners do not know of our unofficial flights between Yerevan and Turkey; there are about 30,000 Armenians who actually work here. And finally, border towns want the borders to be opened because they suffer economically. I think we should also reason it out with the Azeris as well and get on with life. This would be enough to help Turkey with the Armenian resolution.

If the resolution passes next year, would Turkey close İncirlik base?

Turkey will have to respond to this. I don?t think it will necessarily close down İncirlik altogether but it may not allow supplies to be sent from İncirlik. Which, by the way, may be the only way for the Bush administration to convince Congress — if that is the case then the lives of American soldiers would be jeopardized. The Bush administration may then put the blame on the Democrats and say, ?You jeopardized the lives of American troops.? It may also backfire on the Republicans and the Democrats may say, ?We always told you Turkey was an unreliable ally — at a time when our troops are suffering they?re doing this to us.?

What are the other foreign policy priorities ahead of the new Turkish government?

*Soli ?zel: A senior lecturer in international relations and political science at İstanbul Bilgi University, he is also a columnist for the daily Sabah. He has also taught at UC Santa Cruz, Johns Hopkins University School of Advanced International Studies (SAIS), the University of Washington, Hebrew University and İstanbul?s Boğazi?i University. He has received fellowships from St. Antony?s College, Oxford University, the EU Institute of Security Studies and the Woodrow Wilson Center for International Scholars. His pieces have been published in international publications.