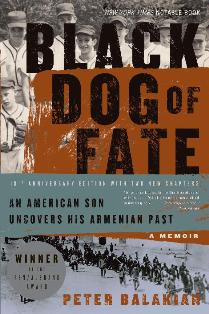 Reflections upon reading the 10th anniversary edition of ?Black Dog of Fate?

I first read Peter Balakian?s memoir Black Dog of Fate as an undergraduate student at Haigazian University in Beirut almost a decade ago. In January 2009, when I received an advance copy of the 10th anniversary edition of the memoir?which now had two new chapters on the author?s trip to Lebanon and Syria in 2005?I decided to suppress my lazy urge to only read the new chapters, and instead reread the entire book.

If you have read the book, I would advise you to do the same. The author?s visit to Aleppo?which he calls his grandmother?s ?lost world of refuge??and the Syrian deserts where hundreds of thousands of Armenians were massacred in 1915, will have deeper meaning if the reader walks, again, on the path that led a young American living in New Jersey to discover his Armenian roots, his Ararat, and his Der Zor.

After reading the new edition of the memoir that received wide critical acclaim when it first came out a decade ago, I felt that it was incomplete until those two final chapters were written. The first edition of Black Dog of Fate was the story of a pilgrimage that ended with many questions answered, but the site of the pilgrimage was only reached intellectually and emotionally. Only now, after passing through Aleppo and Der Zor, does the author?s journey of discovery seem fulfilled, his pilgrimage complete.

?For Armenians, Der Zor has come to have a meaning approximate to Auschwitz. Both, in different ways, epicenters of death in a systematic process of mass killings; both symbolic places, epigrammatic names on a dark map,? Balakian writes. As he tells the story of his journey through that epicenter, the author has as companions his great uncle Grigoris Balakian, Ambassador Henry Morgenthau, Armin T. Wegner, and others who wrote about the horrors of Der Zor in the immediate aftermath of the genocide.

But Balakian?s chapter on Der Zor is not a story of the past and the story of a visit to the past alone, as we see the author in the Syrian desert thinking not only about the Armenian Genocide but also ?the [U.S. presidential] election of 2000, of the incompetent, usurping men who had come to power and undermined democracy.?

Having lived in Syria?s neighboring Lebanon, Der Zor was all too real for me. The Armenian Catholicossate in Antelias, my native town, has a small memorial where the bones of genocide victims from Der Zor are displayed. As a schoolchild, I remember going there every year on April 24 with my schoolmates, lighting a candle and laying wreaths.

Der Zor was all too real also because of the stories I had heard from genocide survivors growing up in Lebanon.

And Der Zor was all too real in the memoirs, research papers, and history books published on the Armenian Genocide.

But for me, too, it was only an intellectual and emotional reality. Because I always avoided the pilgrimages to Der Zor that were organized by the schools or Armenian organizations in Lebanon. Living only hours away from the site where my people were massacred, I never felt ready to go there.

Because Der Zor is the end of a journey, just like it was for the hundreds of thousands of Armenians?mostly women and children?who perished there.

Yet, it is also the beginning of a journey, just like it was for the survivors of the Der Zor massacres. That journey, that end and new beginning, materialized for Peter Balakian in 2005.

I do not know when it will for me. But I know I will go there, one day, with a group of Turkish citizens who would like to honor the memory of the victims of Der Zor. It will probably not be a large group at first. But the group will grow year after year. And one day, thousands of Turks will visit the site, just like thousands of Armenians do today.

One day, as the ever-growing group of Turks walk with me in the Syrian desert, my journey, too, will end.