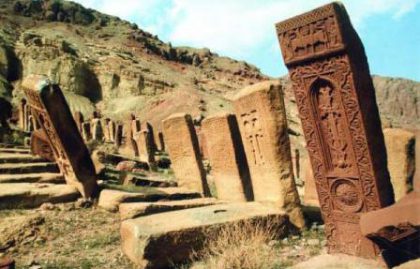 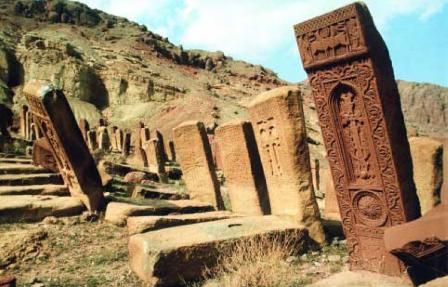 Scottish researcher Steven Sim reported about his troubling experiences in Nakhichevan, a historic Armenian territory now occupied by Azerbaijan. Since Sim's 2006 revealing report has not been adequately publicized in the international media, I would like to present here some of its highlights.

Sim stated that he entered Nakhichevan by land from Turkey and traveled to the village of Abrakunis at Yernjak valley. When he asked a 12-year-old about an ancient church there, the boy pointed to an empty piece of land.

Sim next visited Bananiyar, known to Armenians as Aparank, where he reported that ?at least until the 1970s there were some ruins of a large medieval church located on high ground in the middle of the village. Now a mosque is built on the former church grounds.? At Norashen, two Armenian churches and a graveyard had existed at the north-western edge of this village. He found no trace of either churches or the graveyard.

On his 3rd day in Nakhichivan, while traveling by train to Julfa, Sim observed the remains of the Jugha graveyard. He reported seeing ?a hillside covered by stone slabs, spread out over three ridges. All of the gravestones had been toppled, without any exceptions.?

In Ordubad, Sim was taken to the police station where his bag was searched, as he was interrogated about the purpose of his visit. He was then placed on the next bus back to Nakhichevan city. From there he went to Shurut which used to be ?a small Armenian town during the late medieval period, with churches, schools, monasteries, scriptoria and several tens of thousands of inhabitants.?

At the neighboring Krna village, there were no traces of the local Armenian Church. The same was true about the village of Gah. When he asked a passerby about the church in Shurut, he was told that it had been destroyed.

In Shurut, Sim was confronted by a group of villagers. When he said that he had come to see the old church, they told him that there was never a church in their village. As he left Shurut, the taxi driver told Sim that the villagers had phoned the police in Julfa and that law enforcement officials would probably be waiting for him somewhere along the road.

A car was indeed waiting for Sim. ?A policeman got into the back of the taxi and asked me if I had a topographic map, and an ethnographic book.? When Sim answered that he did not, the policeman made a cursory search of his bag. In Julfa, Sim stopped at the police headquarters, where his bag was searched again. After waiting in a corridor for a while, Sim was taken to the town?s Araz Hotel. He was escorted to a garden in the back of the building. Sim was finally allowed to leave after 3 hours. Everything in Sim?s ?bag was taken out and carefully looked at, and the bag itself was examined for any secret compartments. This lasted for about 15 minutes, without a word being spoken.?

Sim was asked about his job. How much did he earn, who paid him to come to Nakhichevan, and why would he spend his own money to come here? The officers examined carefully Sim?s notebook and checked through all of his photographs stored in his digital camera. They showed most interest in a photograph he had taken in Nakhichevan city. ?It was of a stone slab that I had seen in the gardens opposite the Momina Hatun mausoleum, surrounded by a large collection of ram-shaped gravestones. On this stone was carved a cross rising from a rectangular base.?

The Azeri officials told him that it was not a cross. Sim told them that he had read about the church in an Armenian book. They angrily responded: ?It is wrong. It is lying to you. You see, Armenians are always lying — they are lying to everyone.? They also stated that ?there never were any Armenian churches anywhere in Nakhichevan. There were no Armenians ever living here — so how could there have been churches here?? The Azeris told Sim: ?We think that you are not here with good intentions towards the Azerbaijan republic.?

Sim stated that his unpleasant experiences in Nakhichevan shed ?some light onto the attitudes that Azerbaijan holds about Armenians and anything Armenian.? The report shows why it is impossible for Armenians of Artsakh (Karabagh) to live ever again under oppressive Azeri rule. If a Scottish visitor is treated so poorly, imagine how much worse Azeris treated their Armenian subjects in Artsakh until its liberation.

Note by Azad-Hye: An historical Armenian land, Nakhichevan is currently under Azerbaijani rule. Officially it is called “Nakhchivan Autonomous Republic” (Azerbaijani: Nax?ıvan Muxtar Respublikası). It is a landlocked exclave of Azerbaijan that covers 5,363 km? and borders Armenia (221 km) to the east and north, Iran (179 km) to the south and west, and Turkey (15 km) to the northwest.