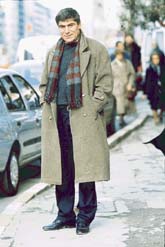 Upon completing his secondary education at the Armenian Dpravank school in Istanbul, he took Philosophy and History course at the Philology Department of Istanbul University.

While at the university, Dink had become sympathetic with the Turkish leftist movement, as a result of which he was often persecuted by Turkish law enforcement agencies and on several occasions even jailed.

In Istanbul, Dink established the bilingual (Turkish/Armenian) weekly Akos, of which he has been the editor-in-chief.

He was assassinated on 19 January 2007, in Istanbul in front of the building where Agos is published.

He was married and had two children.