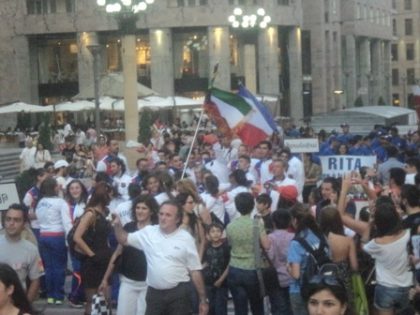 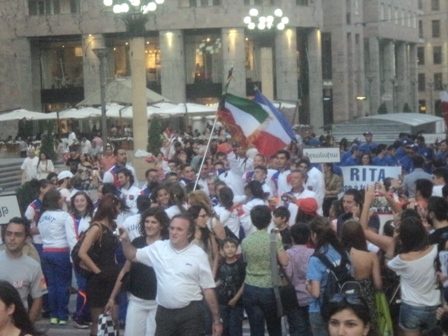 9th Pan-Homenetmen games started in Yerevan on 27 July 2013. The opening ceremony was held last night in the “Liberty Square” in the center of Yerevan. The Games will last to August 3.

600 athletes from 17 countries paraded to the square through the Northern Avenue, chanting national songs and team mottos.

Regrettably, the level of interest in the celebration was modest, and, apart from the athletes themselves, their families and immediate supporters, the ceremony was only observed by occasional onlookers. Anyway, this did not lessen the enthusiasm of the competitors.

The opening ceremony featured welcome speeches by Harutyun Shmavonian, the head of the organizational committee of the games, Vahan Hovhannesyan, member of the ARF-D Bureau, Firdous Zakaryan, head of staff of the Ministry of Diaspora and Gagik Tsarukyan, head of the Armenian National Olympic Committee.

The games were kicked off by lighting the Olympic torch. The honor to finish the torch relay was trusted to Tvin Carole Moumjoghlian, Lebanese female table tennis player, who participated at the 2012 London Olympics.

The ceremony was followed by a variety of live performances, beginning with the performance by the Armenian Orchestra of the Folk Musical Instruments, led by prof. Norayr Davtyan.

Previous games of Homenetmen (Armenian General Athletic Union) were held in July ? August 2009 in Yerevan. The first games took place in 1981 in Montreal and Toronto.