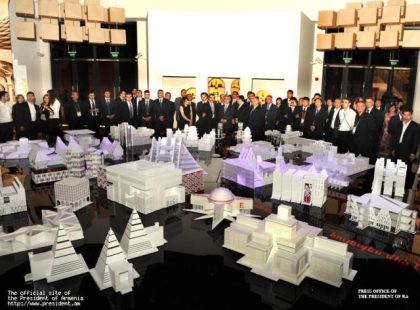 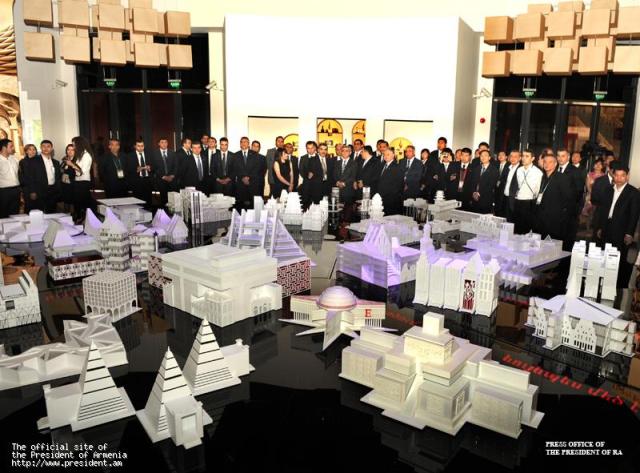 On 30 April 2010, President Serzh Sargsyan officially opened the Armenian pavilion at the Expo 2010 Shanghai, China. The exhibition will last till 31 October 2010. Armenia is participating in the exhibition with a pavilion that grabbed the attention of the visitors.

Ani Chapkinyan, PR Manager of the organizing committee, is inviting Armenian businessmen from all around the world to visit the exhibition and make use of the available facilities in the pavilion's business office. Businessmen can also register their services and products at the Armenian virtual commercial centre, thus making them available to millions of visitors.

The Armenian pavilion is offering the visitors a look at the “City of the World” project, which represents the construction of a city (Geopolis) at the foot of Mount Ararat (see explanation below).

After eight years preparing, Shanghai opened Friday the largest in its history Expo so far with a lavish show of lights and fireworks. A total of 189 countries and 57 international organisations are taking part in the World Shanghai Expo 2010, including Armenia.

Armenia?s President, who is on a visit to China at the invitation of the Paramount Leader of the People's Republic of China, Mr. Hu Jintao, along with Armenian delegation to China, including county?s Foreign Minister Edward Nalbandian, Minister of Economy Nerses Yeritsian, Minister of Energy and Natural Resources Armen Movsisian, Assistant to Prime Minister Ruben Shatvorian and other officials and numerous guests participated in the opening ceremony of the Armenian Pavilion.

The theme of the Armenian Pavilion, which is located within Zone C of the Expo Site, is ?City of the World?; it aims to invite people of the world to construct the City (Geopolis) at the foot of Mount Ararat. Submitted models by famous architects across the world are exhibited on the booth in the middle of the pavilion to listen to opinions from all sides. The motto of the Geopolis is ?Time is not power over it.? City?s crystalline model is presenting the Tree of Life ? one of the key symbols of the Armenian Pavilion. Another one is the ?Round Table of Nations,? wreathing the City?s model.

Armenian group has also equipped the exhibition with projectors to present a 3D Interaction Show of the Geopolis at the Experiencing Pavilion. According to Shanghai World Expo 2010?s sponsors, the Interactive Shows are first-ever being so widespread represented; and Armenia is one of those rare nations who successfully are presenting a 3D shows.

It?s worth mentioning another interesting feature of the Armenian Pavilion: door-stones, similar to Armenian Cross-Stones, are put in the circle, screening images of various Armenian ancient and modern architectures.

There is a commercial zone at the Armenian Pavilion, where visitors can buy Armenian goods and test Armenian food.

Armenian Pavilion will host various events. In particular, it will hold the Apricot Garden event, at which visitors can embrace the blossoming apricot trees, taste the unique apricots of Armenia and enjoy the magical sounds of Armenian Duduk flute made of wood from the apricot tree.

During the Gold & Silk event, visitors can discover many interesting facts about ancient trade relations between Armenia and China, enjoy the unique mastery of Armenian jewelers.

On September 21, the Armenian National Day, some festivals are expected to take place within the expo with participation of the Armenian delegation.