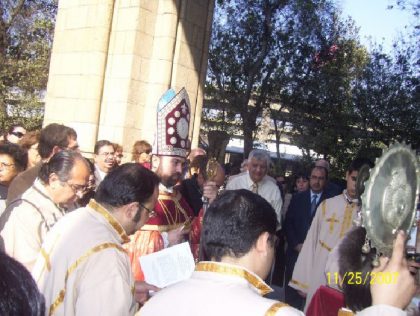 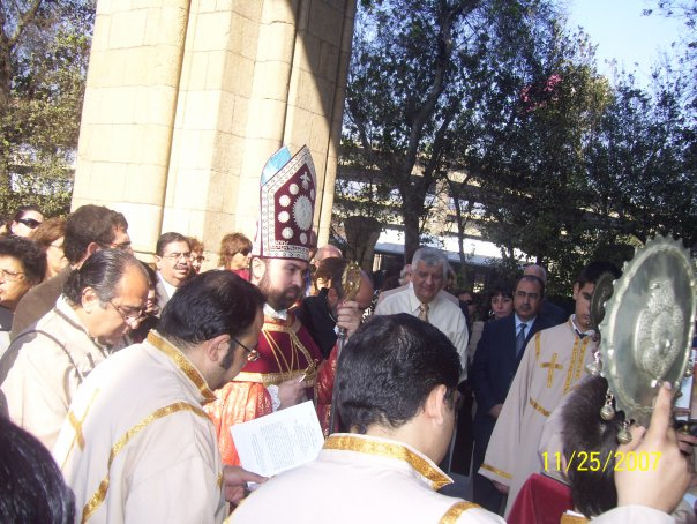 I just returned from a fascinating trip to Egypt. The Primate of the Armenian Church had invited me on behalf of the Diocesan Council to deliver the keynote address at the annual commemoration of the Armenian Genocide. I accepted the invitation with some trepidation given the on-going turmoil in Egypt since the toppling of the 40-year despotic rule of Pres. Hosni Mubarak.

Bishop Ashot Mnatsakanyan had reassured me that the situation in the country was peaceful, and that the community was looking forward to my visit, as they have been reading my weekly columns in local Armenian newspapers.

Upon my arrival in Cairo, I visited the Diocesan headquarters and the Armenian Embassy where I encountered a familiar face. Amb. Armen Melkonian, an old friend, had served as the Consul General of Armenia in Los Angeles a decade ago. After a pleasant lunch with the Primate and the Ambassador on a restaurant-ship on the Nile, I spent the afternoon at a massive shopping mall in Cairo buying new clothes as my suitcase was left behind in London by British Airways. I refrained from purchasing items that carried the “Made in Turkey” label.

Cairo is a highly congested city of 17 million. It takes more than an hour to travel a short distance. Most traffic lights do not work and no police are seen in the streets. The most shocking site in Cairo is the “City of the Dead” — a cemetery where tens of thousands of people live among the tombs. Amazingly, thousands of satellite dishes are perched on the tombs! One wonders how the destitute residents of the cemetery can afford satellite TV?

In the evening of April 28, I spoke at the Armenian Genocide commemoration in Cairo on the topic of “Genocide Recognition or Pursuit of Justice?” The next day, I traveled to the historic city of Alexandria where I delivered similar remarks at the commemorative event organized by the Armenian community.

Returning to Cairo, I participated in a town-hall meeting on May 2, during which community members questioned me on contemporary Armenian issues. The inevitable question that almost always comes up during my talks, not surprisingly was also raised in Cairo and Alexandria: “Do Armenians lose their rights for genocide restitution after 100 years?” My answer was a firm NOβ ?. There are no statutes of limitation on the crime of genocide under international law!

One of the highlights of the trip was the reception dedicated to the printing of my Arabic book in Cairo, originally published in Beirut, titled: “The Armenian Genocide: The World Speaks Out — 1915-2005, Documents and Declarations.” The book signing ceremony was held at the Armenian Embassy in the presence of representatives from other Embassies, members of the Egyptian media, scholars from local universities, Armenian community leaders, and members of the clergy. Brief remarks were made by Amb. Melkonian and Prof. Mohammad Rifaβ  at al-Imam who wrote the introduction to the Egyptian edition of the book, followed by my concluding comments. While in Cairo I gave a number of interviews published in Arabic, English, and Armenian in the local press.

I had the pleasure of visiting colleagues at Housaper and Arev Armenian newspapers. I also paid a heart-breaking visit to the Kalousdian School which was days away from shutting its doors due to a shortage of students after serving the educational needs of the community for more than 150 years. The Kalousdian School will be merging with the Noubarian School in Cairo.

While the Armenian community is safe in Egypt, it is struggling to cope with the uncertainties of a country slowly transitioning from military to civilian rule. The newly formed Parliament, dominated by the Muslim Brotherhood and Salafists, may be disbanded and replaced with a more representative body. Later this month, Egyptians have the opportunity to elect a president who could take bold initiatives to begin healing their ancient and glorious countryβ  s many ills.

In recent years, a large number of Armenians left Egypt for greener pastures in the United States, Canada and Australia. Yet, those who have remained are doing their utmost to cling to their language, religion and ethnic traditions. Fortunately, local Armenian organizations can benefit from vast real estate holdings bequeathed to them decades ago by Armenians who were wealthy businessmen and high ranking Egyptian government officials.

It is incumbent on the Government of Armenia and Armenians worldwide to extend a helping hand to their compatriots in Cairo and Alexandria and not allow these once vibrant communities to turn into ghost towns with extensive resources that only a few would enjoy.