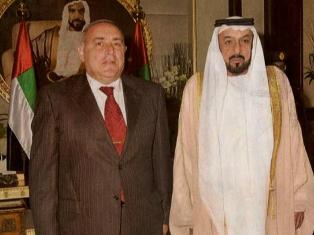 Just two days after his arrival to the United Arab Emirates, the new Ambassador of Armenia His Excellency Gegham Gharibjanyan presented his credentials to President Sheikh Khalifa bin Zayed Al Nahyan at Al-Diyafa Palace in Abu Dhabi on 10 April 2012.

During the ceremony which was attended by newly appointed 12 resident and non-resident Ambassadors, President Khalifa reiterated the UAE's interest in extending bridges of friendship, cooperation and tolerance among peoples of the world, building balanced relations with all friendly countries as well as in promoting its economic, cultural and tourism relations with other countries.

At the sidelines of the ceremony Ambassador Gharibjanyan extended best wishes from President Serzh Sargsyan to Sheikh Khalifa who, in his turn, underscored the importance of further expansion of bilateral cooperation and reciprocated best wishes to President Sargsyan.

Ambassador Gegham Gharibjanian is born in Yerevan in 1951. He is graduate of the Department of Oriental Studies, Yerevan State University (1968-73) and has attended higher courses of Public Administration at the University of California (1994). During the Soviet times he was active in the Committee of Cultural Relations with the Armenians Abroad. On the diplomatic front he served as Ambassador of Armenia in Iran (1999), Deputy Minister of Foreign Affairs (2005) and Chief of Staff of the National Assembly (2009). He speaks Persian, Russian and English, besides his mother tongue. He is married and has three children.

2) Ambassador Gharibjanyan follows the launching ceremony of the Armenian Church in Abu Dhabi (04 May 2012).