on 18th of January, 2007, His Beatitude Nerses Bedros XIX, Catholicos Patriarch of Cilicia of Armenian Catholics, has appointed Gregoire Kaloust as Principal of Mesrobian High School.

On Tuesday, 6th of February 2007, Mesrobian High School welcomed Jean Boghossian, the President of the Robert Boghossian and Sons Foundation, along with Patrick Faradjian, the representative of the Foundation in Lebanon.

The honorable guests were welcomed by Principal Gregoire Kaloust. During the meeting, Kaloust informed the guests about the whereabouts and the latest news of Mesrobian High School. Boghossian, who was interested in general about the situation of the Lebanese Armenian schools, received information concerning the latest benevolent visit of Harout Sasounian, President of the United Armenian Foundation, to Lebanon.

After the meeting, Kaloust invited the guests to have a tour within the Mesrobian campus. Boghossian was especially excited when he saw the showroom, the laboratory, the chapel, and the Intermediate and Secondary students' library, all built through the contribution of the above mentioned Foundation.

Furthermore, the guests visited the new students' court on the roof of Mesrobian. They also saw the auditorium and the new library for Kindergarten and Elementary students, which are currently under construction.

Finally, Jean Boghossian and Patrick Faradjian congratulated the Principal of the school for the ongoing work. They hoped to repeat their visit very soon in order to see the auditorium and the new library completed. 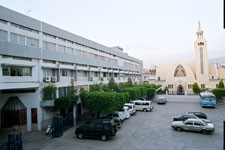 Mesrobian school was founded in 1939 by the collaborative efforts of His Beatitude Krikor-Bedros XV Catholicos Patriarch of Cilicia of Armenian Catholics, Father Boghos Ariss and Father Boghos Bezdiguian. In 1973, the school opened its secondary section.

Mesrobian Technical College was founded by Father Yeghia Yeghiaian in 1983. It was reorganized and modernized in 1993.