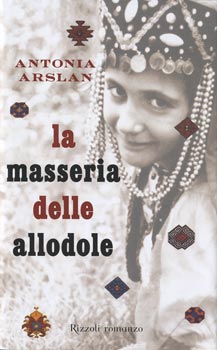 A new Italian movie by Paolo and Vittorio Taviani will be presented at the Berlin Film Festival on 14 February 2007. It will hit the cinemas around the world in May 2007. It is a movie about the Armenian genocide and is based on the book “La masseria delle allodole” (Skylarks Farm) by the Italo-Armenian writer Antonia Arslan. The movie carries the same title in Italian, while the English title is “The Lark Farm”.
?
Antonia Arslan based the book on her family memories. The movie is in Italian with English subtitles. The actors are mainly Italian, French, Spanish, Turkish, etc (Paz Vega, Tcheky KAryo, Moritz Bleibtreu, Yvonne Scio, Angela Molina) including Canadian – Armenian Arsinee Khanjian, the wife of the known director Atom Egoyan (Ararat movie). The production is joint Italian, French and Spanish.
?
The Taviani brothers (Paolo and Vittorio) are considered to be directors of the scale of Fellini. They have already won the Palma d'Oro at the Cannes Film Festival. They were asked to present this movie at the Cannes film Festival, but they opted instead to present it at the Berlin Film Festival, in order to sensitize other European countries other than France on the Genocide subject and also because of the high presence of Turkish population in Germany.
?
The movie depicts the story of Yerwant and Sempad, two Armenian brothers from Anatolia. Yerwant at the young age of 13 decides to leave his family and go to Italy to study in Venice. Sempad, instead, stays in Anatolia to work in a pharmacy store. At the age of 40, Yerwant finally plans a visit to his brother back home. Sempad prepares to celebrate the arrival of his brother. It is the year 1915, and events develop differently than planned. The movie at this point shifts from the celebration to the large scale disaster befallen on the Armenian population in this little village, where the two brothers live. Yerwant will never make his way back to the village.
?
Movie critics in Europe say that this Italian movie by the Taviani brothers will strongly upset the present Turkish government of Erdogan, especially now with the debate going on in Italy and other countries over having Turkey in the European Union.
?
Movie critics also say that “la masseria delle allodole” will be more strongly received by the public than earlier movies about the Armenian genocide (namely “Ararat” by Egoyan and “Le voyage en Armenie” by Robert Guediguian), due to its vivid portrayal of the genocide.
?
It will be also different? from the documentary “Screamers” by the American-Armenian heavy metal band The System of the Down.
?
The Taviani brothers said in an interview that they don't want to be judgmental with this movie but they think that Turkish people need to face history and “fare i conti” with it (admit it happened), like the Italian people admitted the brutality of fascism a long time ago.
?
Combined sources