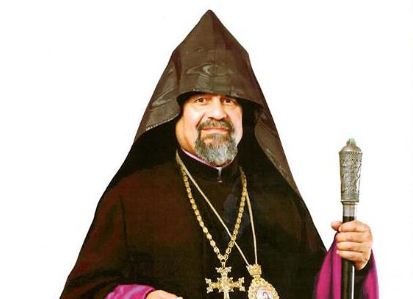 It is with deep regret that the Mother See of Holy Etchmiadzin announces the death of His Eminence Archbishop Aghan Baliozian.  His Eminence entered his eternal rest on September 22, while in Sydney Australia.  He died suddenly of a heart attack at 66 years old.  His Eminence was the Primate of the Diocese of Australia and New Zealand.

His Holiness Karekin II, Supreme Patriarch and Catholicos of All Armenians; the members of the Supreme Spiritual Council of the Armenian Church; the Brotherhood of the Mother See of Holy Etchmiadzin; and the entire class of clergy and faithful; deeply mourn the untimely death of Archbishop Aghan, and pray for the repose of his soul.

Blessed be the memory of the righteous.

CANBERRA: The Prime Minister of Australia, Julia Gillard, Minister for Immigration and Citizenship, Chris Bowen, and Minister for Multicultural Affairs, Kate Lundy issued the following joint statement on the occasion of the passing of His Eminence Archbishop Aghan Baliozian, Primate of the Armenian Apostolic Church of Australia and New Zealand.

The Prime Minister, Minister for Immigration and Citizenship and Minister for Multicultural Affairs, today paid tribute to His Eminence, Archbishop Aghan Baliozian OAM, Primate of the Diocese of the Armenian Church of Australia and New Zealand, who has died in Sydney aged 66.

His Eminence served as the head of the Armenian Apostolic community in Australia for 30 years, and won widespread regard for his spiritual guidance, scholarship and his key role in building understanding between different churches and faiths.

Archbishop Baliozian was awarded the Medal of the Order of Australia in 1995 and the Centenary Medal in 2001 for his community leadership.

His Eminence will be remembered as a wise and gifted pastor who led the Armenian Apostolic Church during a period of significant expansion and growth, especially in the area of education.

On behalf of all Australians, we honour the memory of Archbishop Baliozian and extend our sincere condolences to all members of the Armenian Apostolic Church and the wider Armenian Australian community.

Newer PostA seminar for the teachers of Armenological subjects
Older PostConference on Armenian, Jewish, and Tutsi Genocides held in Rwanda