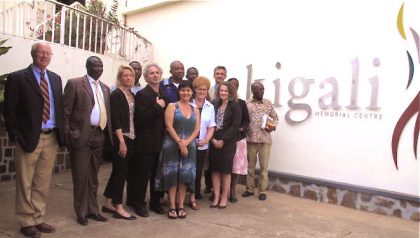 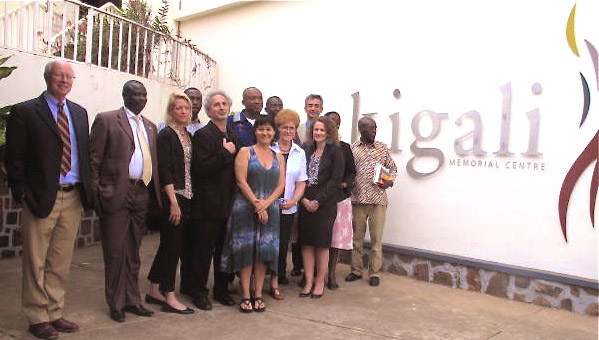 KIGALI, Rwanda?”Genocide and Denial: The Armenian, Jewish, and Tutsi Genocide” was hosted by and held at the Kigali Genocide Memorial Centre in conjunction with CNLG (National Commission for the Fight Against Genocide) in Kigali, Rwanda from July 17 to 18.

The Memorial Cenre houses a museum that includes exhibits on the Armenian genocide, the Holocaust, the Cambodian genocide, the Bosnian genocide, and genocide in Darfur. The two-day conference featured papers by distinguished scholars from the United States, Europe, and Rwanda. Its primary focus was the analysis of denial as a facet of genocide's aftermath. The Rwandan media including Rwanda TV covered the conference and The Rwandan New Times ran a feature article “Scholars Discuss Impact of Genocide Denial.”

The Master of Ceremonies and conference co-organizer, playwright Bianca Bagatourian, called the conference to order on Tuesday morning July 17, noting that many things, including “the legacies of denial perpetrated by the Turkish state, anti-Semitic groups, and Hutu nationalists, connect the three unambiguous cases of genocide in the twentieth century.” Because denial is always an issue following genocide, Jean-Pierre Karegeye, Tom Ndahiro, Jose Kagabo, and Hadley Rose all discussed various dimensions of the denial issue in Rwanda today, and Rose discussed the problems that arise in drafting genocide ideology laws.

Noted Holocaust scholar and conference participant, Deborah Lipstadt emphasized that: “Denial of genocide whether that of the Turks against the Armenians, or the Nazis against the Jews, or the Hutu against the Tutsi is not an act of historical reinterpretation. Rather, the deniers sow confusion by appearing to be engaged in a genuine scholarly effort. The abundance of documents and testimonies that confirm the genocide are dismissed as contrived, coerced, or forgeries and falsehoods. . . . Denial of genocide strives to reshape history in order to demonize the victims and rehabilitate the perpetrators.”

Conference co-organizer Peter Balakian later stated that “denialism is the final stage of genocide, as it attempts to falsify history and create a counterfeit universe for the survivors and their legacies, and it must be studied and analyzed in order to be exposed for the ethical problems it creates.”

The conference included a dynamic combination of lectures and presentations that dealt with facets of genocide and dimensions of denial: Dr. Peter Balakian, Colgate University, US: The Armenian Genocide and Modernity; and A Fetishized Foreign Policy: Turkish State Denial of the Armenian Genocide. Dr. Jos? Kagabo, Ecole des hautes ?tudes en sciences sociales, France: On Genocide Against the Tutsi in Rwanda: Different Forms of Denial; Dr. Jean-Pierre Karegeye, Macalester College, US: Denying the Tutsi Genocide: An African Paradigm? Dr. Deborah Lipstadt, Emory University, US: To Debate or Not To Debate: Strategies for Addressing Genocide Denial ? Like Trying To Nail a Blob of Jelly to the Wall; Dr. Wendy Lower, Claremont McKenna College, US: Landscapes of Destruction and Refuge?Topography of Genocide in Killing Fields of Eastern Europe; Tom Ndahiro, Researcher, IGSC, Rwanda: When Racial Hatred is Fashionable, and Bigotry Eulogized; Dr. Donald Miller, University of Southern California: The Role of Survivor Testimony in Countering Genocide Denial: Comparing Oral History Testimony of Armenian and Tutsi Genocide Survivors; Hadley Rose, Esq.: Re-Drafting Rwanda's Genocide Ideology Law; Dr. Gregory Stanton, George Mason University, US: Tactics of Denial: A Comparison of Denial of the Armenian Genocide by the Turkish State and Denial of the Tutsi Genocide in Rwanda by Hutu Power Genocidaires.

During both days, audiences that included Rwandans, Europeans, and Americans showed great interest in the presentations at the Kigali Genocide Memorial Centre, which is now central to the cultural life of the city and is also visited by thousands of tourists annually. The Kigali Memorial Centre was established by the Aegis Trust, founded by Dr. James Smith, who also created the Holocaust Memorial and Education Centre in the UK. The staff of the Centre, led by Ms. Solange Umulisa, Deputy Director, did a superb job of making the conference a groundbreaking international event. “Having a scholarly symposium on Armenian, Jewish, and Tutsi genocides and their aftermaths,” Balakian noted, “in an important sub Saharan African country like Rwanda opens up new pathways for intellectual work.”