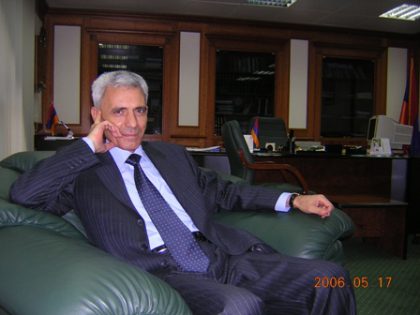 Your Excellency, Could you please give us an idea about the progress of diplomatic ties between the Republic of Armenia and the United Arab Emirates?

Diplomatic relations between and the UAE were established in 1998. Two years later opened an Embassy in Abu Dhabi. I came here first in April 2000. The official opening of the Embassy was on 23rd September 2000, with the presence of the Foreign Minister Vartan Oskanian, members of the diplomatic missions accredited to the UAE, senior members of the UAE Ministry of Foreign Affairs and a considerable number of Armenians.

The opening of the Embassy was a significant event. Armenians from UAE, and have come to witness it. There was great enthusiasm in the air.

Six years have passed since then. We can say that the initial two years were the foundation years, the formation of the legal framework for our activities. Generally speaking the countries of the Gulf Cooperation Council (GCC) are very important to us, not only for economic reasons but also due to the geopolitical proximity. was the first country with whom we established diplomatic ties in 1992, followed by in 1994 and the rest of the countries followed few years later (except ).

There is intensive cooperation between Armenia and the UAE within the international organizations such as the United Nations. In economic and commercial terms, the solid legislative base has been formed between the two countries, favoring more economic exchange in the future. Until 2002, the size of the exchanged goods between the two countries was not very high, but today it has reached the level of 100 million dollars. Compared to other counties this is not a huge sum, but having in mind our situation the figure is encouraging.

We have a feeling that the cultural ties are even more developed between the two sides.

In the cultural domain we had many achievements. We organized cultural days in two separate occasions. We signed cultural agreement with Sharjah, the cultural capital of the UAE. In September 2005 we hosted for the first time the Sharjah Cultural Days in , an event that will be remembered for long, as the Ruler of Sharjah Sheikh Dr. Sultan Al Qasimi himself attended some of the activities. These were magical days in and several other locations outside the capital.

Did the visit of the Ruler of Sharjah to result in any specific agreements, besides the moral value of a visit paid by the first high ranking Gulf personality to ?

In fact it was a very successful visit. During Sheikh Sultan?s visit educational and scientific agreements were signed between UAE and and scientific centers (including the Armenian National Academy of Sciences and the Public University of Yerevan). Immediately after the departure of the Sheikh his educational consultant returned to to finalize the agreements.

We would like to express our gratitude and thanks to this great humanist Sheikh Sultan who is really a noble Muslim. His plan to renovate historical monastery of Haghardzin is a great expression of the historical ties between the Arabs and the Armenians. This 10-11 centuries monastery would be renovated with the whole surrounding infrastructure. It is a great project. Already the project has been agreed upon and is officially ratified. Some technical issues are remaining before the eventual start up. In fact it is a series of projects, not a mere architectural renovation. There are plans related to the development of the transportation routs, sewage systems, residing locations of the monks, etc. This will bring a lot of change to the whole area of Dilijan.

During the visit of President Kocharian to (2002), an initial understanding was reached regarding a long term loan to be provided by the Abu Dhabi Development Fund. I will not elaborate on this issue, but would only say that it is being followed up by the concerned authorities.

Summarizing the status of our relations, I would like to say that UAE and enjoy excellent relations. Since 2002 the relations have reached to the level of exchanging Ambassadors. UAE has appointed also its (non-resident) Ambassador to , based in .

Our relations cover all domains. Generally speaking I am satisfied with what have been done, but I would like to see further development.?The Embassy has developed multi-profile activity. Most GCC countries have their own envoys appointed to . also has designated a non-resident Ambassador who happens to be in these days and would be presenting his credentials to the officials in .

The Speaker of the National Assembly (Parliament) Arthur Baghdassarian visited and in 2005 and signed agreements with the parliaments of those countries. In March 2006 a cultural event was organized for the first time in Kuwait directly by our Embassy. Armenian painters participated and the local press wrote extensively about it.

What about the relations with the other GCC countries?

The excellent relations with the UAE are affecting positively on the other GCC counties. The only country we have problems with is . I would like to mention here with regret that there are no diplomatic relations between and . We believe that the problem behind this is political and related to the issue of Nagorno Karabagh. We hope to solve this political problem, especially that our overall policy clearly shows that we do not have any sort of disputes with the Arab World.

We know that there have been some excellent articles about in the local press. Could you inform us about the media contacts?

There has been also some publications, including 5 books that I personally wrote about (culture, history, politics, etc) during my tenure. I noticed that there was a big information gap and tried to prepare some handy publications on Armenian life for general and specific reference. My aim was to introduce to the public. All books were in Arabic language. The Embassy has also arranged to send journalist to . They have returned back and published their impressions in the local press. We have done all what we could to represent our country in the most proper way. Armenia has a long history but still it is considered as a newcomer on the world political stage.

What about the relations with the Armenians living in the Gulf countries?

The relations with the Armenian community in the UAE (and the other Gulf communities) were excellent from the first moment. The opening of the Embassy was a great change in the community life. The Armenians of the Diaspora found themselves in front of a live presence of the motherland . This really created a kind of enthusiasm in all sectors. I would like to thank the community for being united in supporting us.

I would like to convey my sincere thanks to the spiritual leaders of the community and the members of the Diocesan Council. The decision of the later during a meeting in in 2000 to support the opening of the Embassy had really encouraged us to go ahead with the plan.

I would like to especially thank the Chairman of the Embassy Caretaking Committee Varujan Narguizian (Chairman of Bank of Sharjah), who was very active supporter of the Embassy. Through his help and the commitment of the other members we achieved our goals. The overall outcome was a very great impetus for the diplomatic progress of in the region. We have cooperated also with the Prelacy and the Diocesan and National Bodies. I would like to express my thanks to all who played a role in this.

Back in 2000 the construction of an Embassy building was almost like a dream, but it seems that soon it will be a reality.

Yes. During the visit of President Kocharian to the UAE (2002) and as a result of the meeting with the then President Sheikh Zayed bin Sultan Al Nahyan, Armenia was granted a piece of land in the diplomatic quarter (some 7.000 square meters). Based on reciprocity also gave similar piece of land to the future building of the UAE Embassy in .

Finally, Your Excellency, we would like to know more about your future plans and career prospects.

I have finalized my mission in this country and I depart tomorrow with great satisfaction. I have achieved warm contacts on all levels. I have devoted myself to this cause. From the first moment I had great desire to fulfill the mission of building a new Embassy. This is the gift that I can give to our newly independent state.

I will work in the Ministry for a while. During the course of time it will be clear where I would be heading for the next mission. As an orientalist and expert in the Arab world, my diplomatic activity can best realize in the Arab World.

I would like to thank the people and the leadership of the UAE headed by the President Sheikh Khalifa Bin Zayed Al Nahyan. I have good feelings towards this country and its people. They supported me from the first moment.

My warmest feelings also to the Armenian community. I would like to thank Azad-Hye for the cooperation during all these years. You have personally arranged my first official contacts in this country from the modest room in the Park Hotel on , where I used to stay in the first few months of my mission in , UAE.

Ambassador Arshak Poladian took the Armavia plane from to in the early hours of 20th May 2006.

New Ambassador Vahagn Melikian has been earlier this month. He is expected to report duty soon.

Below is a circular on this occasion by the Council of the Armenian Community of Abu Dhabi.? 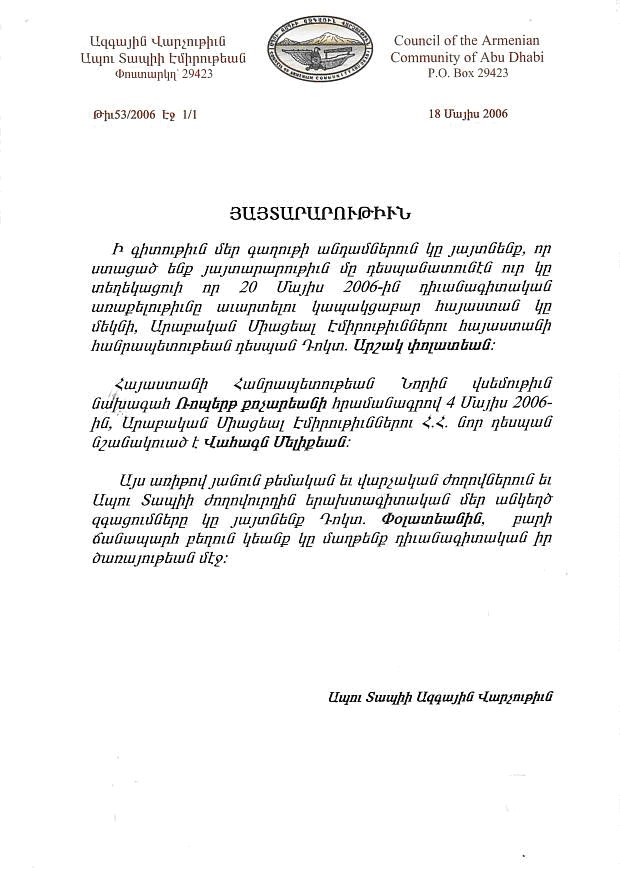