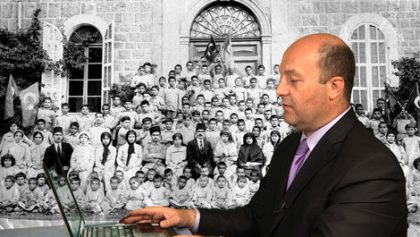 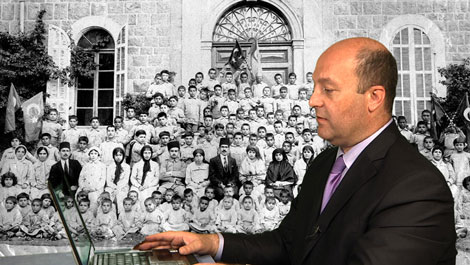 Five years ago Maurice Missak Kelechian discovered a mass grave in Antoura (Lebanon) in the location of an old Turkish orphanage, in the premises of St. Joseph Antoura French College.

On 22 September 2010 a Stone-Cross (Khachkar) and a bronze statue was inaugurated in the Antoura College cemetery in memory of the orphans who were buried there.

Azad-Hye interviews Maurice Missak Kelechian to find out more about the orphanage and the mass grave:

Since 2005 you have been involved in the discovery of Antoura Orphanage. You showed investigative spirit and perseverance. What are the lessons that we should learn from your experience?

It continuously boggles my mind every time I think what if I did not pursuit the Antoura college entrance to find out where did actually Jemal Pasha and & Khalide Edib Adivar stood; to discover that Turkification of Armenian children was forcefully implemented in that college during the years 1915-18. I am sure thousands of people have read Stanley Kerr?s ?Lions Of Marash? book where that photo was published. Why others did not go and I went on a chilly day in December 2005 chasing where Jemal Pasha stood? Why did historians 20, 30, 40 years ago did not go there when Antoura orphanage memory and survivors were still around?

Article II of the 1951 UN Convention on the Prevention and Punishment of the Crime of Genocide specifically states that the definition of Genocide ? “to destroy in whole or in part, a national, ethnical, racial or religious group” ? includes “forcibly transferring children of one group to another group.? This is exactly what the Ottoman Turks did to the young survivors of the Genocide under the pretense of providing care to the orphans in Antoura.

Do you think there are other details about Antoura Orphanage that can come out into light through further research? Are there others like Karnig Panian who would be able to testify or have left any testimony about the orphanage and the turkification program there?

Research is an endless process; it helps putting together small pieces to makeup the larger picture. The more I look the more there is! It never crossed my mind that the father of famous Las Vegas singer Manuel Melenguichian was an Antoura orphan. Who would have thought Sarkis Kerekezian (Arnavoud) in Kevork Apelian?s latest book was an Antoura orphan. In Dr. Verjine Sevazlian?s ?The Armenain Genocide & Historical Memory? Harutyiun Alboyadjian from Fendedjak tells his life in Antoura as well. These are valuable testimonies and yet another proof of what was going on in St Joseph Antoura College.

Even from Turkish source; Halide Edib Adivar the directress of Antoura College assigned by Jemal Pasha himself writes in her 1926 memoires in English as she conversed with Jemal Pasha.

Halide: ?Why do you allow Armenian children to be called by Moslem names? It looks like turning the Armenians into Moslems, and history someday will revenge it on the coming generation of Turks.?

Jemal: ?The Turks and the Kurds have that orphanage. When I hear of wandering and starving children, I sent them to Antoura. I have to keep them alive. I do not care how. I cannot bear to see them die in the streets.? Well there you go Jemal is describing the reality.

?Orphans of Gencocide? is not focused only on Georgetown boys and Antoura Orphanage, the focus is on 130,000 orphans scattered all over the Middle East. The short 18 minutes version of the film also covered, the Armenian orphans which were taken from Jerusalem by the late Ethiopian king Haile Selassie where the Armenian orphans became the official band of the King who played for visiting dignitaries.

The Armenoid team specially flew from United States to capture the inauguration of the Antoura memorial as well as to interview survivors of the Armenian Genocide which we were able to find a 106yrs old Babig from city of VAN. I also took them to capture the Orphanage of Ghazir and Birds Nest as well.

Is there any project to publish book about Antoura orphanage?

I have been encouraged by few friends to write a book and I have considered it, although I am worried about finding free time, in my hectic work travels.

In 2007 at Ras al-Ain, in north eastern Syria, a mass grave was unearthed in archaeological site of Tell Fakhriya with about 80 bodies. This kind of evidence combined with Antoura's mass grave and other locations (such as the most famous extermination location in Der ez-Zor) can form a Middle Eastern map of Armenian Genocide?s physical traces. What benefits would it bring encouraging pilgrimages to such sites and how can this be organized?

The mass graves of Ras Ul Ain & Deir Zor are totally a different category. Both places were the final destination of Armenians mainly the old & women. The Ottoman Turks knew the unbearable conditions of both places where exactly defenseless people were forcefully driven.

As for the Antoura Turkish orphanage Armenian children were specifically brought from Armenian & foreign orphanages for Turkification who eventually mostly died of starvation, Cholera, Typhus and neglect. Children ageing 3 to 14 were not cared properly, they were drinking ink! They were eating paper & fly?s! They were even grinding the bones of their dead orphan friends and mixing the bones with soups to have something to eat & survive!

This was Genocide without sword and blood! This was forcibly transferring children of one group to another group exactly as stipulated by the UN Convention on the Prevention and Punishment of the Crime of Genocide.

This was not Islamisation this was Turkification because Kurds are already Moslems! As you know even to date Kurds are denied their nationality, their language, their culture and traditions! To the extent that they call them ?Mountain Turks? avoiding the word ?Kurd? which shows how intentions of the past are still implemented even today!

Pilgrimages to similar sites give respect to victims who were denied & forgotten under tough circumstances. It teaches new generations history! It shows what humans could do to other humans! Without acknowledgment, regret or punishment the ugly face of Genocide could happen to any people, like we have seen it happen in Darfur, in Cambodia or even Srebrenica where Bosnian Serbs killed unarmed Moslems.

How receptive do you find the Arab and in particular Lebanese mass media in highlighting Antoura monument inauguration and other related topics?

The Arab and particularly Lebanese media attended in force the inauguration of the Antoura Memorial, which was shown on local TV channels; newspapers carried the news the following day. Even one of the newspapers said from now on Armenians will not only commemorate their dead on April 24, but Sept 22 will be another day as Antoura will be their Dzidzernagapert in Lebanon!

Are you planning to provide the Genocide Museum in Yerevan with information and material about the Antoura orphanage and the fate of the children?

On May 13th 2006 The Armenian Genocide Museum-Institute received a copy of
– Aztag Antoura special (Turkification of Armenian children after the Genocide)
– Karnig Panyan memoires book
– CD-R containing a copy of all current & Archival Antoura photos & material
– DVD Prepared by Yergir Media on Turkification of Armenian children.
– I received an acknowledgment letter that all the Antoura material have been registered in the Armenian Genocide Museum-Institute register File # 183 dated May 15 2006.

On July 10, 2010 after my presentation of Turkification of Antoura children at the Ararat Eskidjian Museum the City of Los Angeles surprised me with the prestigious Certificate of Recognition presented to Missak Kelechian reading ?Although 95 years have passed since the start of the Genocide, there is still an abundance of pain felt by the Armenians worldwide as a result of the Republic of Turkey?s persistent denial of the events that transpired under the guise of the World War I. Acknowledging and properly documenting the events of the 1915 is a key component for a successful and meaningful healing process. Your invaluable efforts to document the fate of the Genocide orphans help Armenians across the globe move a step closer towards attaining justice for the memory of the 1.5 million who perished.?

Photo: A scene from the documentary “Orphans of the Genocide” with Muarice Missak Kelechian who re-discovered the Antoura orphanage.

Orphans of the Genocide: a documentary film by Bared Maronian