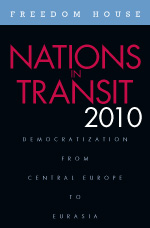 Click here for the Freedom House report on Armenia:

“Nations in Transit 2010” is the 14th edition of Freedom House?s comparative study of democratic development in 29 countries from Central Europe to Eurasia. The overarching conclusion is that 2009 was a year of broad, cross-regional pressures on democratic developments: scores declined for 14 of the 29 countries. In the non-Baltic former Soviet Union, the ratings for six countries eroded, and only one improved.

Armenia in the “Nations in Transit” report:

The report about Armenia was prepared by Alexander Iskandaryan, Director of the Caucasus Institute, a think tank and educational center in Yerevan.

The report evaluated Armenia in the following domains (see score out of ten for the last three years):

Brief comments about the evaluated domains in 2009:

Civil society: Since NGOs remain concentrated in the capital and major cities, and are still largely dependent on foreign funding for their sustainability, Armenia?s civil society rating remains at 3.75.

Independent Media: Owing to the limited reach of print media and few genuinely independent outlets, which exist for the most part only online, Armenia?s independent media rating remains at 6.00.

Local Democratic Governance: The Council of Alderman in the capital Yerevan were elected for the first time in 2009; while the elections were competitive, they were also marred by violations, thus Armenia?s local democratic governance rating remains at 5.50.

Judicial Framework and Independence: Owing to the incomplete implementation of PACE resolutions in 2009, Armenia?s rating for judicial framework and independence remains at 5.50.

Corruption: Given that the anticorruption campaign failed to reach high-level public officials in 2009, Armenia?s corruption rating remains at 5.50.

Outlook for 2010: Armenia will continue to work toward neutralizing the consequences of the global economic crisis. In the event that relations with Turkey are not normalized and the border with Turkey does not open, Armenia can expect poorer economic prospects. Rapprochement with Europe will continue in the framework of the Eastern Partnership project. The unresolved conflict over the breakaway region Nagorno-Karabakh is likely to stagnate while stakeholders continue to make optimistic statements regarding progress in negotiations. In domestic politics, the main challenge for Armenia is the creation of a level playing field in politics and the emergence of a viable opposition, which was marginalized and nonfunctional at the end of 2009. Given the absence of national elections in 2010, this goal will probably not be achieved during the coming year.

About Freedom House (from Wikipedia)

Freedom House is a international non-governmental organization based in Washington, D.C. that conducts research and advocacy on its conceptions of democracy, political freedom and human rights. It publishes an annual report assessing the degree of perceived democratic freedoms in each country, which is used in political science research. The organization was founded by Wendell Willkie and Eleanor Roosevelt in 1941, and describes itself as “a clear voice for democracy and freedom around the world.”?