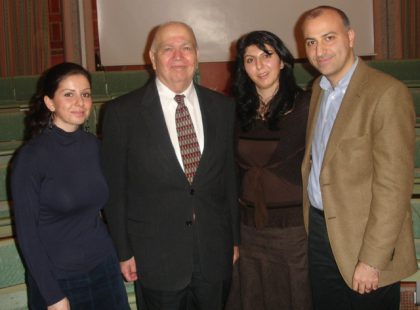 During the first quarter of 2007, Professor Richard G. Hovannisian, AEF Chair in Modern Armenian History at UCLA, has continued to maintain an intense schedule of lectures, conferences, and interviews relating to the Armenian Studies. He has at the same time maintained a full teaching load in his popular UCLA courses in Armenian history and on the comparative study of genocide.

Hovannisian attended the annual conference of the American Historical Association in Atlanta, January 4-7. As president of the Society for Armenian Studies (SAS), he also took part in meetings of groups affiliated with the AHA and laid plans there for SAS participation with organized panels in the next AHA conference which will be held in Washington, D.C. in January 2008.

The following weekend, January 12-13, Dr. Hovannisian was in Stockholm, Sweden, where he spoke to the Council of Swedish Armenian organizations on the changing landscape of historic Western Armenia. The community is made up of Armenians speaking a variety of languages, including those who know only Kurdish, Turkish, or Swedish. Hovannisian's bilingual presentation and illustrated talk helped to reach all segments of the audience. At the same time, he became better acquainted with the translation into Swedish and placing on the worldwide web of his selected works, an initiative of Mr. Vahagn Avedian, a computer specialist in Uppsala. He is the web master of the informative web site www.armenica.org.

On January 27, Dr. Hovannisian spent an hour on Horizon Television in a cultural program, Gragan Yeter, hosted by Ms. Monet Airian, a former student and poet. The following day he was at St. John Armenian Church in San Francisco at the invitation of Father Sarkis Petoyan for an all-community luncheon and his presentation on impressions of the historic homelands now in eastern Turkey.

On February 3, Richard Hovannisian was in Zurich for a talk to the Switzerland-Armenia Association. The event was coordinated by Mr. Sarkis Shahinian, an architect who was highly instrumental in the release by Time Magazine in Europe of the DVD on the Armenian Genocide and who with several others is currently leading a campaign in Switzerland against genocide deniers. Among his collaborators is Mr. David Ekchian, who with his wife Lilit hosted Hovannisian and the conference organizers at a post-lecture dinner and discussion.

On February 9-10, Dr. Hovannisian was an invited guest at the historic Clark Library in Los Angeles for a conference on Imperial Models in the Early Modern World, during which the management of differences in the Ottoman, Hapsburg, Iberian, and other imperial states was the subject of exploration and discussion.

On February 11-12, Hovannisian was a featured speaker at an international conference Genocide and Religion: Victims, Perpetrators, Bystanders, and Resisters, sponsored by the Pepperdine Law School Institute on Law, Religion, and Ethics. Addressing a large audience of legal scholars, academics, human rights activists, and students, Hovannisian assessed the degree to which religion was a contributing factor in the Armenian Genocide, the religious components of pre-genocidal Ottoman society, and the exploitation of religion by the Young Turk nationalists.

On the evening of February 16, Professor Hovannisian was honored by Archbishop Hovnan Derderian and the Western Diocese of the Armenian Church in a rich cultural and culinary event, with analyses of Hovannisians life and work by former students and now professors, Barlow Der Mugrdechian of California State University, Fresno, and Vahram Shemmassian, California State University, Northridge. The immediate occasion for the event was the publication of the sixth volume in the series, Historic Armenian Cities and Provinces, with the papers for each volume revised and edited by Hovannisian. The volumes now include Van/Vaspurakan; Baghesh/Bitlis and Taron/Mush; Tsopk/Kharpert; Karin/Erzerum; Sebastia/Sivas; and Tigranakert/Diarbekir and Edessa/Urfa. Professor Der Mugrdechian adeptly presented Hovannisians life from his youth in the San Joaquin Valley to his past and present academic pursuits. Shemmassian discussed the importance of each province and volume in the series, before Hovannisian himself reflected on his career and the advances and challenges in Armenian studies.

Richard Hovannisian flew to Boston on February 23 to present an illustrated lecture sponsored by the National Association of Armenian Studies and Research in a standing room audience at the First Armenian Church in Belmont, Massachusetts. He was introduced by NAASR president Ms Nancy Kolligian and the director of programs and publications, Mr. Marc Mamigonian. Hovannisian's recent books were featured at the NAASR bookstore during the post-lecture reception.

Professor Hovannisian returned to UCLA on February 25 for a memorial tribute and program on dedicated to the life and works of Hrant Dink. On Hovannisians initiative, a collective of Turkish students, the Organization of Istanbul Armenians (OIA), and the UCLA Armenian Studies Program, Near Eastern Languages Department, Center for Jewish Studies, and Center for Near Eastern Studies participated in the memorial program: Hrant Dink: His Legacy and His Challenge. The overflow audience of more than 500 students, faculty, and community members participated in a moving program that was opened by Richard Hovannisian followed by a minute of silence with accompanying memorial music. Speakers included Mr. Simon Acilac of the OIA, Ms. Zeynep Turkyilmaz of the Initiative of Turkish Students, Professor David Myers, Director of the Jewish Studies Center, Professor Ayse Gul Altinay of Sabanci University in Istanbul, and UCLA alumnus Dr. Rupen Cetinyan. A video tribute was prepared by Stepan Partamian and a moving musical program with violin and duduk was followed by the traditional “helva” in memory of the departed.

The pace of activities has continued into the month of March, with presentations in the Kensington Library of London sponsored by the Armenian Institute on March 3. The Institutes president, Dr. Susan Pattie, discussed the importance of the series that Hovannisian edits on Historic Armenian Cities and Provinces, and then invited the professor to recount first hand experiences and impressions in those regions. A post-lecture dinner was hosted by Mr. Adom and Mrs. Sella Tenjoukian.

On March 4, Richard and Vartiter Hovannisian flew to Geneva to take part in a gathering sponsored by the Armenian Church and nearly all the Armenian organizations of Switzerland. As the event came on the eve of the test case in the Swiss courts involving a denier of the Armenian Genocide, Hovannisian outlined the typical denial arguments in a comparative perspective and pointed to the continuing harm that denial causes to survivors and successive generations. He also reflected on issues that still need to be resolved in the study of the actual decision-making processes and execution of the genocide. The afternoon program was attended by Armenians from all parts of Switzerland as well as numerous city and canton officials from Geneva and the ambassador of the Republic of Armenia, Mr. Zohrab Mnatsakanyan. The initial verdict of the court that tried the case in Lausanne two days later found the denier guilty and imposed a token symbolic fine, although there is little doubt that the perpetrator side will take the case to courts of appeal and continue to mount pressure on the federal government of Switzerland. (see photograph)

Returning to Los Angeles, Hovannisian was in the Avedissian Hall of Ferrahian High School on the evening of March 9. The program sponsored by the Anahid chapter of the Armenian Relief Society featured his power-point presentation with historical commentary on the sites visited in historic Western Armenia with Dr. Vartiter K. Hovannisian, Professor Fatma Muge Gocek, and the Armenian editor of Agos, Mr. Sarkis Seropian, during the summer of 2006.

The Armenian Communities of the Indian Ocean

On the weekend of March 16-18, Hovannisian organized with Dr. Sebouh Aslanian the sixteenth in the UCLA series on historic Armenian cities, provinces, and communities. The conference, Ebb and Flow of the Armenian Communities of the Indian Ocean, brought together scholars from Armenia, Europe, Mexico, and the United States to consider the active and colorful commercial, intellectual, and philanthropic history of the Armenian communities of India and South Asia. During the conference, which was sponsored by UCLA's AEF Chair in Armenian History, International Institute, Near Eastern Center, History Department, and AGBU Southern California District Committee Professor Hovannisian presented the story of a number of prominent Armenian civic leaders in India and introduced a film about Sir Catchick Paul Chater, who rose from humble origins in Calcutta to become a towering figure in the development of the Hong Kong colony, where even today a park and street bear his name. His large bequest to the Armenian Holy Church of Nazareth in Calcutta has helped to maintain the church and the Armenian College and Philanthropic Academy (Mardasiarkan Jemaran). All conference participants were hosted to special dinner with AEF members by Mr. and Mrs. Hacop and Hilda Baghdassarian.

Richard Hovannisian completed his engagements of the first quarter of the year on March 28-29 with meetings with students and faculty and a public lecture at St. Mary's College in St. Marys City, Maryland (the states first capital) at the invitation of Professor Bjorn Krondorfer of the Department of Religious Studies. Hovannisians presentation in the college's distinguished lecturer series, titled “Must We Still Remember? The Armenian Genocide as Prototype,” addressed many of the issues with which students in the fields of religion, philosophy, and history have been confronting.