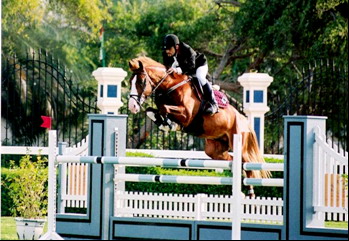 Azad-Hye,  , 9 June 2006: Karen Hakobyan has been living in the most of his life. He graduated from the , Jumeirah (2002) and is following now his career as equestrian sportsman, specifically show jumping rider.

The equestrian sport is unique in its beauty and grace. The combination of rider and horse provides emotion and excitement that no other sport offers. The Olympic sport of Grand Prix Show Jumping is best described as a cross between the excitement of horse-racing and the sheer daring of the downhill slalom. The rules of the game are simple: jump an obstacle course of fences set on a twisting, turning course without dropping a rail or falling off. The horse with the fastest time and the fewest jumping faults is declared the winner.

The sport emphasizes profound values such as dedication, courage, confidence and commitment, especially in terms of the relationship between the human and the animal (rider and horse). This remarkable sport has gathered rapid momentum over the past decade and has become an immensely popular and highly visible spectator sport.

Some of his achievements include finishing 4th in the UAE seniors rankings (2003) and wining the title of the Emirates Championship in Group C  (2004). Hakobyan is member of the Armenian Show Jumping Team since 1998 and the UAE Equestrian Federation from 1994. He took part also in the team competition for the Caucasus Cup in (2000), achieving the first position.

It is a known fact that top level sports competitors require financial support to be able to enter highest contests. This is particularly true in show jumping. In order to conquer highest levels Karen Hakobyan is seeking for a sponsor who will provide stability of funding, which will enable him to optimize his combined knowledge, experience and talent and realize his full potential in the national and international show jumping arena. In return the sponsor will receive benefits through the publicity, advertising and status of being associated with a highly popular equestrian sport. 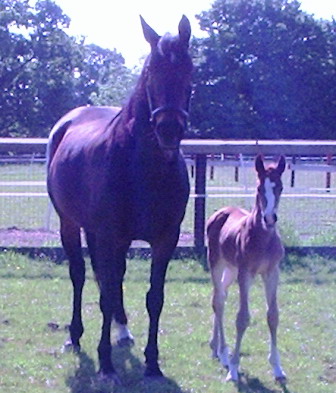 Sponsoring Hakobyan has another dimension that is to promote a newly emerged independent in international occasions such as being one of the first to represent in the Olympic Games in the near future, besides several well-known international Championships.

Summarizing his goals, Hakobyan mentions to Azad-Hye that his aim is ?to be able to ride and compete as much as possible, and as well as possible?.

His current active show partner is a Dutch warm blood 8 years old stallion called Rezah, which has been with him for the past 4 years. Rezah has started his first breeding in 2005 and his latest offspring is a two weeks old filly (see photo).

1- Karen Hakobyan with Rezah in action.

You can reach Karen Hakobyan at: [email protected]

Azad-Hye wishes Hakobyan the best of luck. We  would be forwarding to his attention any suggestions or support proposals received by readers.