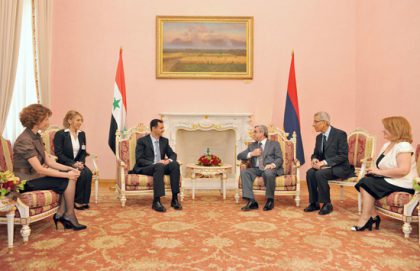 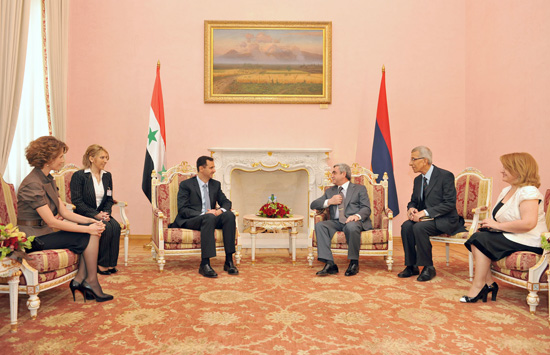 The official welcoming ceremony of the high guest took place at the Presidential Palace and was followed by a private meeting of the two Presidents.

Welcoming the visit of the Syrian President to Armenia, Serzh Sargsyan said, ?Armenia attaches great importance to her relations with Syria one of the most influential countries of the Middle East. We assess the Armenian-Syrian relations as advanced and friendly, but at the same time we believe that there is great potential for their further development.?

Serzh Sargsyan recalled that in 2001, as the Minister of Defense of Armenia, he had an opportunity to visit Syria and has the best recollections regarding that beautiful and hospitable country. He said that Armenia was deeply interested in elevating relations with Syria on a qualitatively new level, paying special attention to economic cooperation and this visit is an excellent opportunity to identify areas for enhanced cooperation.

According to Serzh Sargsyan, success of the bilateral economic relations will be greatly conditioned by the activities of the Armenian-Syrian intergovernmental commission.

The President of Armenia spoke with appreciation about the thoughtful attitude of the Government of Syria toward the Armenian community, recalling also Syria?s assistance to the Armenian people in the direst times of our history. 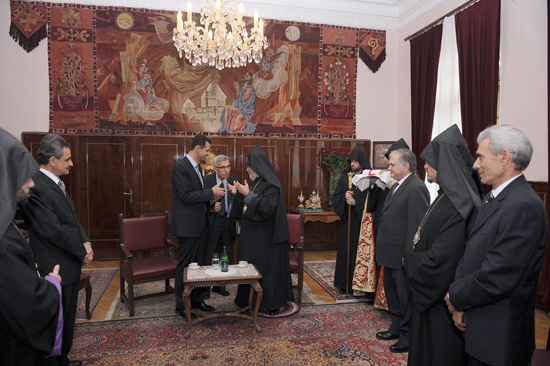 The President of Syria said that the Armenian community was that powerful potential which would allow the two countries to find the ways to implement objectives set during this meeting. He highlighted also the importance of establishing encouraging environment for the businessmen of the two countries.

Statement of the President of Armenia Serzh Sargsyan:

My wife and I are greatly honored to welcome the President of the Syrian Arab Republic Bashar Al-Asad and Mrs. Asad in Armenia.

Our nations have been walking down the intricate and difficult road of history side by side, constantly supporting each other and creating common cultural heritage. The people of Syria lent a hand to the hundreds of thousands of the Genocide survivors in the direst time in the history of our nation. Forefathers of many of the Armenians spread today all over the world had found their refuge behind the Syrian gates. With this regard, I would like to recall the words by the blessed memory President of Syria Hafez Al-Asad pronounced here in Armenia thirty years ago, ?Syria is the Armenians? second motherland.? 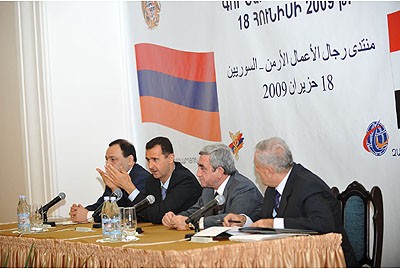 After Armenia regained independence, the Armenian-Syrian relations have acquired a new quality and new content. Development of our relations with the countries of the Middle East and with Syria in particular has been among the priorities of Armenia?s foreign policy. Armenia and Syria have been cooperating extensively in the political area and particularly in the international structures. However, it is necessary to undertake decisive steps to raise the level of our economic and trade relations. In this area, despite existing difficulties, we are ready to exert necessary efforts to solve pivotal issues that would promote cooperation. The Armenian-Syrian Business Forum, which is opening in Yerevan tomorrow, will help to move this issue forward. Agreements have also been reached related to the cooperation in the area of transportation, especially land transportation. In addition, a number of documents fostering the bilateral cooperation have been singed today. Among them I would like to underline the Agreement on Encouragement and Protection of Investments, which is a major document for the promotion of bilateral cooperation in the economic and trade area. Equally significant are the documents on cooperation in the humanitarian area.

Speaking about our today?s meeting, I would like to note that it was conducted in the atmosphere of openness and mutual understanding. We have discussed with the President of Syria issues pertaining to bilateral relations, as well as regional and international issues of mutual interest. I would also like to mention with satisfaction that we share total understanding regarding all the discussed issues. We have also reached agreement to continue high level contacts and discussions.

I am happy to once again welcome President Al-Asad?s visit to Armenia, viewing it as a historic visit of the President of a friendly nation.

Statement by the President of the Syrian Arab Republic Bashar Al-Asad:

?I am happy to visit this beautiful country and meet with President Serzh Sargsyan.

This is the first visit of the Syrian President to your country after Armenia?s independence. Certainly, relations between our two countries are not confined to formalities. These relations should be observed from a number of viewpoints: historical, existing mutual sympathy, peoples? viewpoint, and cultural perspective. During the last two centuries both nations were walking down a difficult road and those difficulties helped them to stick together to overcome those difficulties. The interaction of the two nations was facilitated by those Syrians, by those Armenians, who were living in Syria, who were highly respected in that country and were true to their obligations. Those Armenians came to Syria, entered that society, adopted its ways, preserving at the same time their own national traditions and their culture. It would be fair to say that a unique kind of individuals was born, those who while living in a different civilization, can create their own, new civilization. To the already existing diverse Syrian culture they added their own.

I can say that these relations have strong foundations. And as a result of today?s discussions and after future meetings we should be able to move forward more decisively and faster. Our meeting with President Sargsyan encompassed many topics. We have spoken about many issues related to the Middle East, Caucasus, and Central Asia.

In Syria we greatly appreciated all the steps directed at the normalization of the Armenian-Turkish relations. I told President Sargsyan about our readiness to assist in that process also since close relations exist between Syria and Armenia and also between Syria and Turkey.

President Sargsyan told me about Armenia?s position on the NK issue. Of course, it is a very complicated issue and we would not like to see it becoming even more complicated, because our experience in the Middle East shows that, unfortunately, whenever the issue becomes more complicated so does its resolution. I asked for President Sargsyan?s opinion regarding that issue because next month I will be visiting Azerbaijan and would like to know some concrete details of this problem. 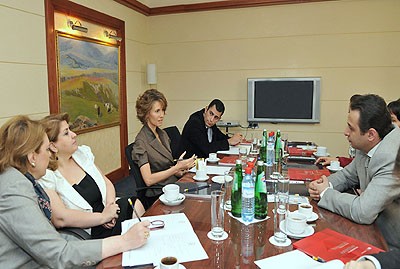 When we talk about peace we cannot disregard Palestinians and especially sufferings of the Palestinian people in Gaza, the difficult situation which exists there, which provides no opportunities for living, which results in children?s death. All these leave a negative mark on the entire process.

Together with President Sargsyan we spoke in detail about our bilateral relations, and I will not dwell on that issue again. Of course, tonight we?ll have another opportunity to continue our discussions.

I express my deep gratitude to President Sargsyan for the invitation to visit Armenia, and I am looking forward to his visit to Syria.

Photos:
1) Presidents Serzh Sargsyan and Bashar Al-Asad.
2) President Al-Asad visits Etchmiadzin and meets with the Catholicos of All Armenians Karekin II.
3) Armenian-Syrian Business Forum with the participation of the Presidents Serzh Sargsyan and Bashar Al-Asad.
4) Syrian First Lady Asmaa Al-Asad visit All Armenian Hayastan Fund to learn more about the activities of this fund in the development sector in Armenia.

Source: The official website of the President of the Republic of Armenia
http://www.president.am/