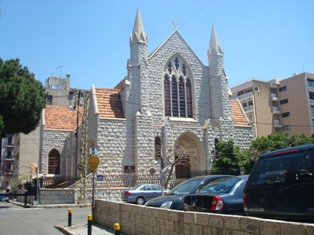 In the latest Lebanese parliamentary elections (07 June 2009) the Lebanese-Armenian community turned out in unprecedented numbers in the hope of securing true representation for the six seats allocated to the Armenians, according to the Lebanese Constitution.

Armenians voted heavily in the Metn district, which includes Bourdj Hammoud, as well as in other Armenian-populated areas. About 80% of the votes went in support of the Armenian Revolutionary Federation (ARF) candidates. The ARF was part of an opposition group known as “March 8”, led by retired General Michel Aoun, in coordination with the Lebanese Hizbollah party and other allies.

The 20% of the Armenians (Hunchak, Ramgavar and others) sided with the ruling “March 14” group, led by billionnaire Saad Hariri, prominent Sunni Muslim leader, wealthy businessman and son of Rafik Hariri, ex-Prime Minister of Lebanon, who was assassinated in 2005.

As a result of the peculiar Lebanese electoral system, the 20% of the Armenians that sided with Saad Hariri received 4 seats out of the 6 seats, apparently through non-Armenian votes.

In an effort to create a foothold in the Armenian electorate, Hariri has funded several Armenian organizations in Lebanon, including the Free Lebanese Armenian Movement and Radio Sevan.

On the other hand Hariri has huge investments in Turkey. His representatives (including the head of the Government, who is traditionally a Sunni Muslim) attended the opening of the Turkish Cultural Week in Beirut on 27 April 2009, an event that was greatly publicized in affiliated media, while the 94th anniversary of the Armenian Genocide (which came few days before that event), went almost unnoticed in the same media and no official from Hariri?s ?Future? movement visited the Armenians on that particular occasion.

Returning back to topic of the Armenian votes, the question which highly disturbs the Lebanese ? Armenians (and should disturb any honest Lebanese citizen) should be: how can the Lebanese Armenians be fairly represented in the Parliament when four of their six deputies owe their success to non-Armenian votes and are therefore subject to the dictation and political will of those who have brought them into the political scene in the first place.

The 2009 Lebanese parliamentary elections are over. But the problem caused by the 2005 election which defrauded the majority of the Armenian Lebanese of their right for true representation still lingers.

The disastrous policy that is still haunting the Armenian Lebanese community began in 2000 when the government of the late Prime Minister Rafik Hariri changed the established parliamentary election laws, and stripped the Armenian Lebanese majority (75%) of its right to directly elect its representatives.

During the ?09 election, the hijacking of the four out of six Armenian seats in the  parliament from the Armenian Lebanese majority by Mr. Hariri?s Sunni voters in Zahl?, Beirut I, Beirut II, and Beirut III districts, has raised several eyebrows in Lebanon and around the world.

The four Hariri-controlled seats are filled by Armenian individuals that were hand-picked by Hariri?s son Saad. These individuals received only 15%- 20% of the Armenian Lebanese votes in their respective districts, yet they were able to get ?elected.?

How is this possible?

In order to re-establish a truly representative government, the seats allocated for each community should be based on demographics. Seats should be allocated to districts where the majority of the members of that particular community permanently reside. In the case of Armenian Lebanese, that district would be Metn (Matn). The incoming parliament should facilitate that move in order to help preserve each community?s right to true representation. The Armenian-Lebanese community must study the legal options that are available in the Lebanese Judicial System and its Constitutional Council.

No democracy is perfect. There is always room for improvements. By constantly finetuning its communal democracy, Lebanon can continue to maintain its position as the bastion of democracy in the entire Middle East.

In my opinion, they cannot be compared. The make-up of the American and the Lebanese populations is different.

The population of the United States consists of over one hundred ethnic groups, speaking over 144 languages. Lebanon?s population is made up of only ten major ethnic communities, speaking mostly four languages ? Arabic, English, French and Armenian.

During the Lebanese civil war (1975-1989), the Lebanese people still felt relatively safe in their respective neighborhoods. Had there been a civil war in the United States it is highly doubtful that the same level of relative comfort would be the norm for the ethnically diverse American populace.

The 128-seat parliament is divided equally between Christian Lebanese and Muslim Lebanese, and subdivided among the largest of the country's recognized 10 ethnic/religious groups.

The reason that the Communal Democracy is just right for Lebanon is because Lebanon is diverse with limited number of communities.

So the best way to describe Lebanon?s unique form of democracy would be Communal and Parliamentary Democracy.

1) Communal, in the sense that every four years, each community is free to directly elect its representatives;

What democratic system is good for the United States or the West may not be successfully applicable to other unique democracies such as Lebanon. Lebanon?s communal democracy lives on. And that?s the way Lebanon has been since its independence nearly seven decades ago. It looks like it will continue to function as long as the country?s leadership practices the open door policy in its intra-national relations.

Aside from short-changing the Armenian-Lebanese community of its right to true representation, the ?09 Lebanese Parliament is the most pluralistic elected body so far. Even the tiniest minorities are somehow represented.